Washington
, Feb. 12 – President Truman said today that the Government of the United States was supporting the United Nations’ settlement of the Palestine issue. The President declined to elaborate his assertion when questioned at his press conference, declaring it was as far as he could go. Mr. Truman gave a slightly fuller exposition of his stand in a reply to a letter from Representative Frank Buchanan, Pennsylvania Democrat, which called attention to the conflict in the Holy Land and the deterioration of the partition situation and asked for the President’s views. The reply, made public today by Mr. Buchanan, stated: “Palestine has been a matter of considerable disturbance to me ever since the Japanese surrender and I've been endeavoring to get the matter worked out. It's now in the hands of the United Nations and this Government is backing the United Nations in the settlement they have suggested.” The President’s disinclination to discuss the problem presented by opposition to the United Nations proposal to partition Palestine was interpreted as an indication that the whole question was currently being studied at the uppermost policy levels.

There was fighting in Safed, a car bomb - history’s first - in Jerusalem, and the Arab League was planning to attack the moment, it said, the British withdrew: this, the drear news coming out of Palestine the first week of February 1948. In the United States, the nascent Jewish state was not faring much better.  Truman, it seemed, was moving away from his original support for the United Nation’s partition plan; the State Department’s recent embargo of arms to the Jews, despite protests, was proving immovable; and Chaim Weizmann, newly arrived in New York to plead Zion’s cause, couldn’t even get an appointment to see the President. All this was enough for Congressman Frank Buchanan, representing a Pennsylvania mill town with a noticeable Jewish contingent, to ask the President to clarify his government’s position. Truman’s response, none-too-empathetic, came five days later:

Palestine has been a matter of considerable disturbance to me ever since the Japanese surrender and I've been endeavoring to get the matter worked out. It's now in the hands of the United Nations and this Government is backing the United Nations in the settlement they have suggested.

The President would do, then, as little as possible, while his State Department did all it could, to prevent the establishment of an independent Jewish nation. Not even the horrific Palestinian Arab (and British mercenary deserter) terrorist attack on Ben Yehuda Street in Jerusalem two weeks later - in which a series of bombings killed 54 people– made a difference in U.S. policy. That epic feat would take a Jewish Kansas City haberdasher, Eddie Jacobson, who, calling on a long-held friendship with Truman – they’d been partners in a failed Kansas City men’s apparel store years before - was able to convince the President to meet, finally, with Dr. Weizmann… and Weizmann, in a secret March 18th White House meeting, was able to convince Truman, finally, to countermand the State Department’s anti-Zionist bias…

It wouldn't be until 6:11 p.m. EST, on May 14, 1948, though, that the United States’ support for the first Jewish state in nearly two thousand years was a sure thing; and even then, it did not include lifting the arms embargo, loaning, or all that summer and fall, dropping its advocacy of a policy of mediation and compromise in the United Nations.
Typed Letter Signed, as President, 1 page, quarto, The White House, Washington, February 9, 1948. To Congressman Frank Buchanan. With transmittal envelope.
Read More 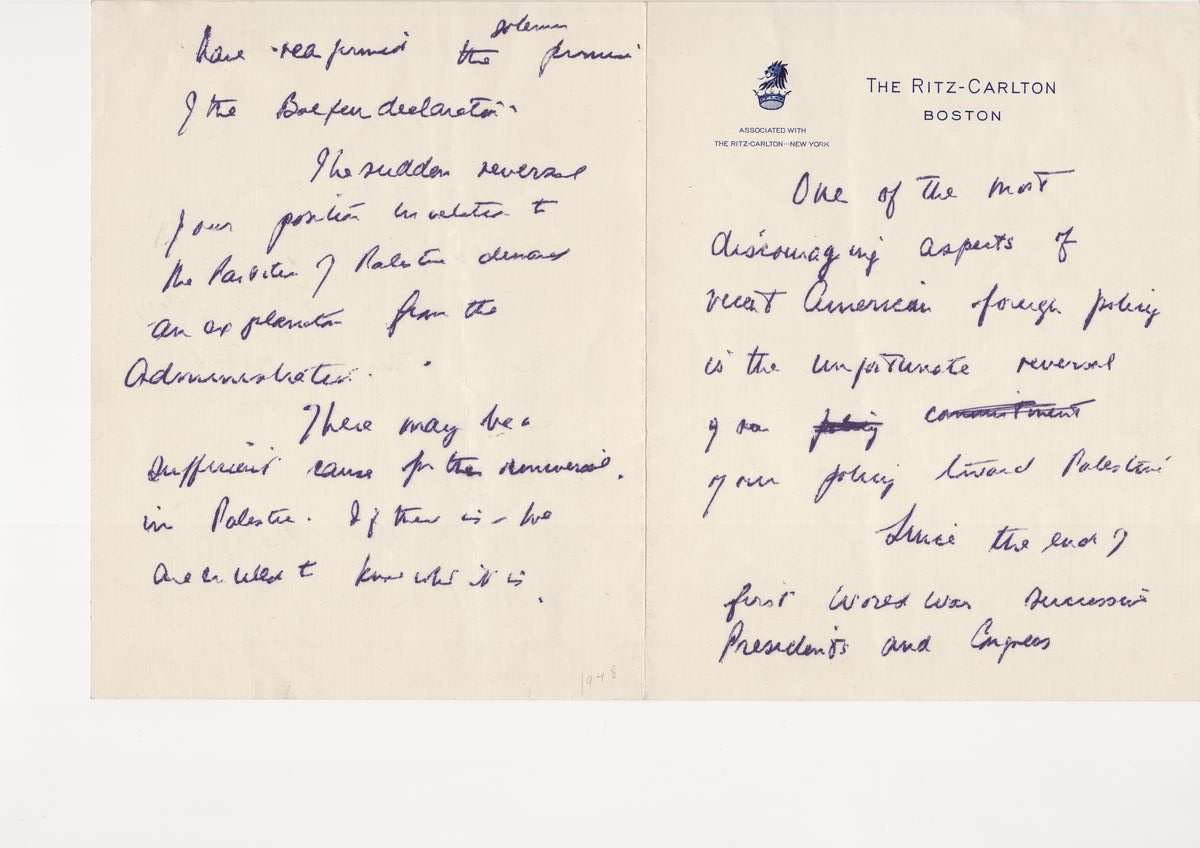 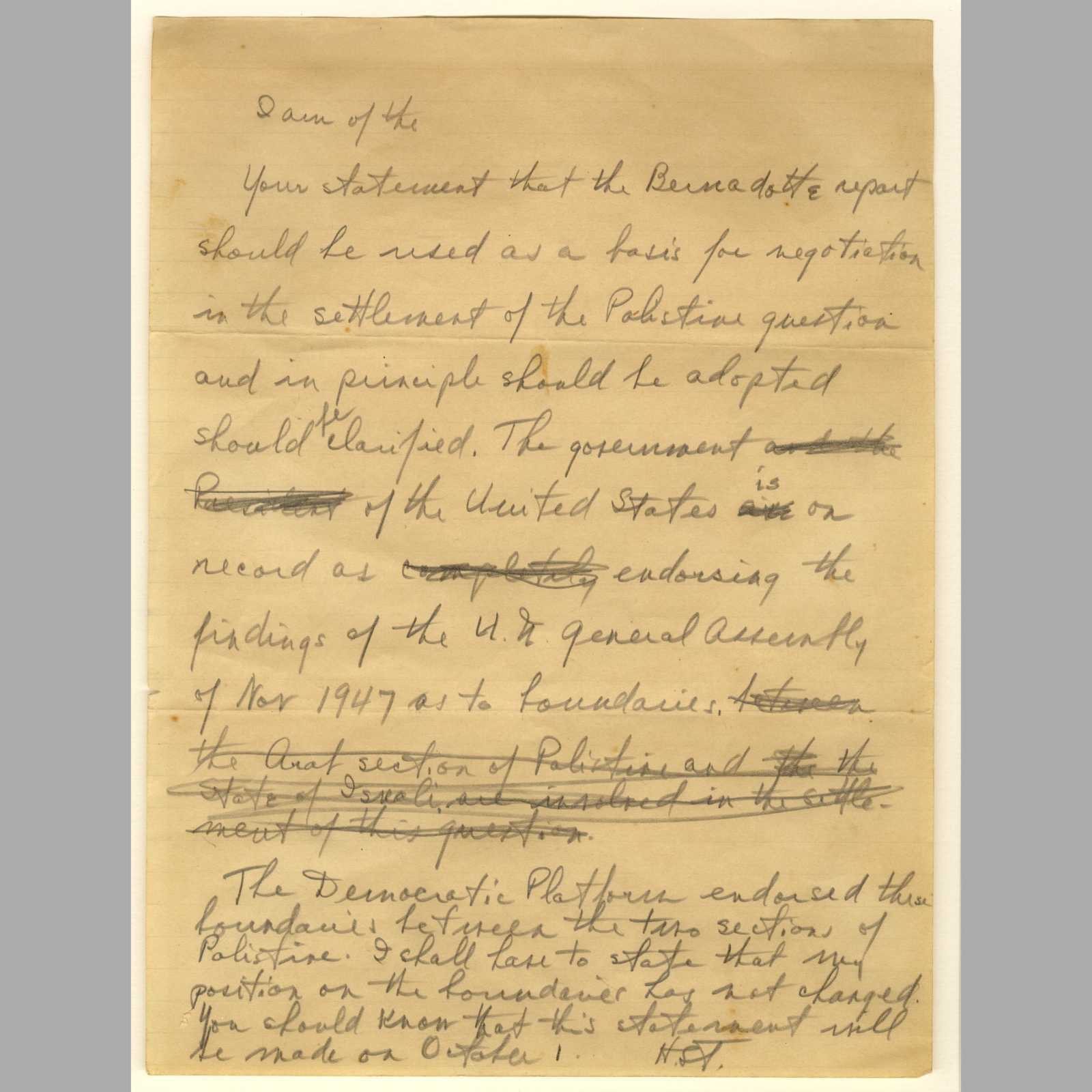 Harry Truman Manuscript on the “Settlement of the Palestine Question” 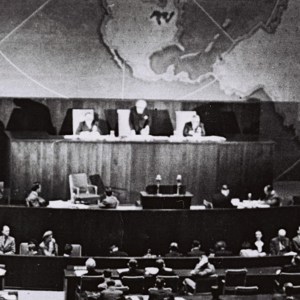 I appreciated  your letter of the fourth in regard to Palestine.

Palestine has been a matter of considerable disturbance to me ever since the Japanese surrender and I've been endeavoring to get the matter worked out. It's now in the hands of the United Nations and this Government is backing the United Nations in the settlement they have suggested. 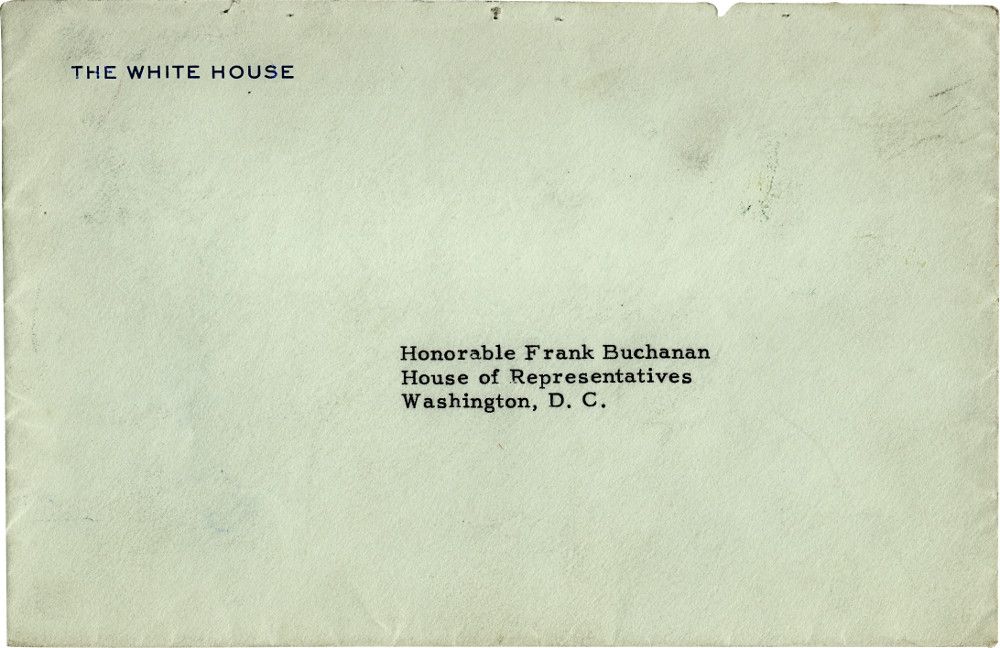