Chaim Weizmann thanks Clark Clifford for his help in getting President Harry Truman to recognize the State of Israel. Shapell Manuscript Collection.

Twenty-six hundred years in the Diaspora, and one comes to appreciate the kindness of strangers. It is not so very surprising, then, that on the very first working day of the very first Presidency of the very new state of Israel, President Chaim Weizmann thanked a virtual stranger – an aide to President Harry Truman named Clark Clifford – for his decisive help in securing Truman’s support first for the Partition of Palestine in November 1947, and then, six months later, convincing the President to recognize the just-declared state of Israel.

Our mutual friend… has kept me informed of doings in Washington, and especially of your magnificent cooperation in many critical situations. In these days of struggle and readjustment we are desperately in need of understanding friendships, and it is good to know that we have in you a genuine friend of our cause. I assure you, and I wish you would in turn assure your great Chief, that we desire nothing but peace and amity with our neighbours, and that we have no aggressive designs on any of them. We shall always be mindful of the Biblical injunction: “Zion will be rebuilt in Justice”.

What to do about Palestine, Truman rued when the decision was his to make, had been “a matter of considerable disturbance… ever since the Japanese surrender.” The Zionists – or, as he thought of them, the Jews – were driving him crazy. Always hypersensitive to what he perceived as bulldozing, Truman took the intense and persistent – indeed, desperate – campaign being waged by the supporters of Partition as an attack on himself.  But if Truman resented being lobbied by Zionists, he wasn’t any happier being both bullied, and ignored, by “the striped-pants boys” in the State Department. His aide Clark Clifford, promoted from Naval Attaché to Special Counsel to the President, pegged the pro-Arab diplomats as anti-Semites, and as much as said so. During the Partition crisis, Truman wavered as his subaltern battled the entire foreign policy bureaucracy, but when the time came, on November 29, 1947, he stood with the Zionists.

Six months later, in May, with the British mandate set to expire and the Jews in Palestine set to proclaim statehood, Clifford once again set himself in opposition to the State Department. This time, however, he received the brief to argue the issue of recognition of the Jewish nation – against Secretary of State George Marshall – from the President himself. “Truman said he would like me to prepare the case for the formation of a Jewish homeland,” he recalled, “as if it were a case to be presented to the Supreme Court.” Facing Marshall in the Oval Office, Clifford calmly and methodically made his argument.  He spoke of the murder of 6 million Jews by the Nazis – and those, too, who survived the Holocaust but were now homeless; he reviewed the Balfour Declaration – which Weizmann, forty years before, had helped to draft; he reached back, even, to the promise of Deuteronomy – “I have set the land before you,” Moses had said. “Go and possess the land which the Lord swore unto your fathers, Abraham, Isaac, and Jacob, to give unto them and to their seed after them.” But Marshall was not only unmoved – he was infuriated. “If you follow Clifford’s advice,” he told Truman, “and if I were to vote in the next election, I would vote against you.” Ultimately, however, it was the unsung aide and not the hero of World War II, who convinced Truman to immediately recognize Israel – and it was that extraordinary feat which Weizmann, on the day he assumed office, hastened, with this letter, to celebrate. 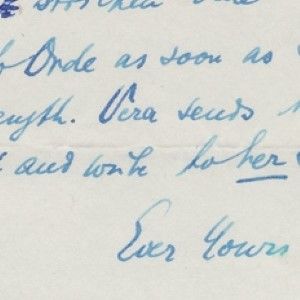 Chaim Weizmann in 1943: “Nothing Short of a Miracle if We Do Get Something Out of this War” 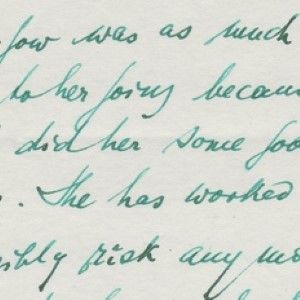