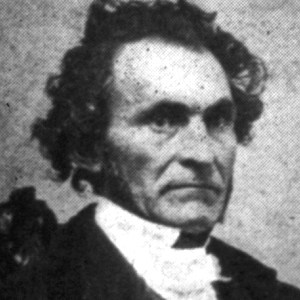 George J. Adams, member of the Latter Day Saint movement's Council of Fifty and founder of the Church of the Messiah. c.1841. Library of Congress.

Lucy Rogers had no money, no prospects, and grew more worried about her kids every day. She had already lost her youngest child, George, to dysentery the year before after sailing from her home in Maine to the Mediterranean city of Jaffa with her husband and five children, as part of a group of 157 American colonists. The death toll in the religious colony they established in 1866 on the sand dunes outside Jaffa continued to swell; Lucy’s surviving children were healthy, but faced murky futures.

The Rogers were among a group of Americans who had followed charismatic preacher, George J. Adams, from New England to Ottoman-ruled Palestine on a messianic mission to prepare the Holy Land for the return of the Jews. “We are going to become practical benefactors of the land and the people,” Adams stated, “to take the lead in developing its great resources.”

But the crops they planted were unsuccessful, their funds had dwindled, and Adams turned out to be more of an alcoholic than a visionary. By late September 1867, just a year after arriving, a few dozen of these impoverished colonists wanted a ticket home. It was at that moment that author Mark Twain came to town and became loosely linked to the rescue of 44 of them, including the Rogers family.

Twain was on a five-month pleasure trip through Europe and the Middle East aboard America’s first commercial tourist ship, the Quaker City, and reporting his adventures in biweekly installments to the Daily Alta California newspaper. Two years later Twain embellished these articles into a book-length travelogue, The Innocents Abroad (1869), which became his bestselling title during his lifetime (outselling The Adventures of Tom Sawyer and The Adventures of Huckleberry Finn) and is currently celebrating its 150th anniversary of publication. “It sold more books than the Bible,” Twain reportedly bragged.

Twain’s steam ship, the Quaker City, was departing from the Jaffa port in late September 1867 to head back west, and gave the 44 colonists a ride to Egypt, where they boarded another ship to England, and then continued onwards to the United States. Many were too embarrassed to return to their hometowns; the Rogers family, however, decided to go back to Jonesport, Maine.

American Artists and Colonists Meet in the Holy Land

The Holy Land was a popular destination for a range of Americans during the 19th century, from believers such as the Adams colonists to creatives like Mark Twain. Sometimes, as in the case of the Adams colony and Twain, these distinct groups crossed paths in the eastern Mediterranean.

Other American colonies preceded the Adams group to the Holy Land. Author Herman Melville, for example, encountered the Dickson colony, an American agricultural mission established outside Jaffa around 1852. When Melville visited the Dicksons in 1857, he was on a Middle Eastern voyage to find inspiration for his next novel, disappointed that his previous title, Moby Dick (1851), had sold only 3,000 copies. (While lunching with the Dicksons, Melville also met colony member Johann Grossteinbeck – who relocated to California after surviving a brutal attack by locals on the colony the following month. He would later be the grandfather of writer John Steinbeck.)

The Adams colony was the largest, though, and attracted press attention back home from the outset. Newspapers and journals closely followed the fates of these 157 souls who sailed from Maine to Jaffa.

After reading about the troubles of his fellow Mainers in Jaffa, Governor of Maine Joshua Chamberlain (a decorated hero at the Civil War Battle of Gettysburg) tried to aid the colonists by sending a ship to Jaffa to bring them home. Three weeks after he made headway in securing help from Secretary of State William Seward, though, the last 44 colonists that wanted to leave Jaffa were already aboard the Quaker City with Twain.

Six months after Twain passed through Jaffa, landscape painter Frederic Church and his travel companion, Reverend David Stuart Dodge, visited the colony in March 1868. Church and Dodge were traveling from Petra back to Beirut, where the artist was based for several months. Adams hosted them, leaving a poor impression on Dodge who had unkind thoughts to share in a letter home. “Such a tirade of ignorance, coarseness, vulgarity, and well-nign blasphemy, I never heard,” Dodge wrote. “I fear his method of helping forward the restoration of Palestine will have to join the list of failures.”

Twain and the Adams Colony

Twain also viewed the Adams colony as a failure. By the time he met the American colonists in September 1867, their numbers had shrunk from 157 to 86; 17 had died (the first loss being two-year-old George Rogers), and 54 had already returned to America on three different ships headed west. By July the remaining colonists penned a public appeal together, in an attempt to raise funds to send them back home. “Words cannot express the bitter sorrow and humiliation that weigh us down,” they wrote, “heightened by the mortifying consciousness of being duped by the machinations of an inhuman deceiver.”

Twain, in his humorous and matter-of-fact style, did find the words to express what had happened, though. “The colony was a complete fiasco,” he wrote in The Innocents Abroad, leaving no holds barred.

He encountered the colony at a particularly unflattering moment. Adams had been recently arrested by US Consul Victor Beauboucher, following complaints from several of the colonists that he was a fraud, an embezzler, and a drunkard. When Twain and the rest of the Quaker City tourists arrived in Jaffa from Jerusalem, ready to set sail for Egypt and begin their journey back home, they were briefly delayed while waiting for horses they had contracted for transport. This delay, and later onboard the Quaker City, gave Twain time to talk to the colonists and hear their stories.

The Adams colonists would have been impossible to ignore at sea since they nearly doubled the occupancy onboard the Quaker City – the ship already had 65 passengers, and 44 colonists were added.

Twain published a dispatch recounting what he had learned about the Adams colony when the Quaker City arrived in Alexandria on October 2, 1867. “The colony failed on account of heavy taxes and poor crops,” Twain summarized in his article. “Adams, the Prophet, got drunk in September, 1866, and remains so to this day. It is to be hoped that he will see the error of his ways when he gets sober.”

Twain recounted the heavy tax structure described by the colonists, in which the Ottoman government claimed one-fourth of a field’s gross yield and the private land owner another fifth, leaving little to eat or sell after reserving another portion for seed for the following year. He also tried to explain the religious beliefs that brought the colonists to Jaffa in the first place.

“I have asked several of those colonists on board the ship what its nature was, but they are singularly reticent on the subject,” Twain wrote. “They talk of the long-prophesied assembling of the Jews in Palestine from the four quarters of the world, and the restoration of their ancient power and grandeur, but they do not make it appear that an immigration of Yankees to the Holy Land was contemplated by the old Prophets as a part of that programme; and now that the Jews have not ‘swarmed,’ yet one is left at a loss to understand why that circumstance should distress the American colony of Mr. Adams. I can make neither head nor tail of this religion.”

At the bottom of his dispatch, Twain listed the names of the Adams colony passengers aboard the Quaker City, perhaps as a means of notifying relatives in America who was safely en route home. The last names included were those of Mr. Rogers and wife; Lucy, her husband Benjamin, and her children were headed back to Maine.

The Adams Colony after Twain

Twain’s characterization of the Adams Colony as a “complete fiasco” stuck, and became the popular way of thinking about both the mission from Maine and the 15 colonists who chose to stay in Jaffa with Adams. Eight years after the Quaker City gave the last bunch of deserters a ride home, Charles Dudley Warner – who co-authored The Gilded Age: A Tale of Today (1873) with Twain and was a close personal friend of the author– visited the colony and reported on what had become of the remaining few in The Atlantic Quarterly.

“On a little elevation a half mile outside the walls [of Jaffa] is a cluster of wooden houses, which were manufactured in America,” Warner wrote. “There we found the remnants of the Adams colony.”

Warner sat with a thickly accented Yankee woman from New Hampshire in a wooden cottage that oddly contrasted with her Middle Eastern surroundings, and frankly asked her why she didn’t just go home. “Wal, sometimes I think I’d like to see the old place, but I reckon I couldn’t stand the winters. This is a nice climate, that’s all there is here,” she answered. “No, I guess I shan’t ever cross the ocean again.”

Nearly 80 years later, historian Reed Holmes heard a different story from an Adams colonist who did spend time aboard the Quaker City on the way to Egypt with Twain. While summering in Jonesport, Maine in 1943, Holmes met Theresa Rogers Kelley – second child of Lucy and Benjamin – who had ventured to Jaffa as a 13-year-old in 1866. Kelley told Holmes about her grand childhood adventure, a story almost too outlandish to be true, and one overly simplified by Twain’s dismissive descriptions.

Holmes was hooked and spent the majority of his career researching the Adams colony, ultimately saving a few of the colony’s remaining wooden homes from demolition and purchasing one that he and his wife, Jean Holmes, preserved and converted into a public museum, the Maine Friendship House.

After studying the story in depth, Holmes asserted that Twain got it wrong and published the colony’s rewritten history as The Forerunners (1981). Twain failed to recognize the example left by those from Maine who hoped to encourage a modern Jewish presence in Palestine, and the fates of the few colonists who stayed in Jaffa and succeeded. Among these was Rolla Floyd, a successful tour operator with a reputation for efficiency and trustworthiness with a staff of local boatmen, guides and carriage drivers. When President Ulysses S. Grant traveled to the Holy Land ten years after Twain (carrying a copy of The Innocents Abroad as one of his guide books), he hired Floyd as his guide.

“Perhaps theirs was a minimal contribution – but beginnings are always small,” Holmes wrote of the colonists in The Forerunners. “Their venture has always been thought of in terms of fiasco and failure, but who can say that a pilot project from which others have learned is a failure? It was perhaps an impossible dream, a magnificent obsession, in which one man seemed to fail but who in failure helped many to succeed.”