Condemnation of United States policy regarding Palestine was expressed by Representative John F. Kennedy (D) of Massachusetts… at the state dinner of the Massachusetts Department of the Jewish War Veterans… Mr. Kennedy demanded the lifting of the arms embargo “to give the Jewish people in Palestine an opportunity to defend themselves and carve out their partition.” He termed the reversal of our stand in the United Nations on Palestine as “one of the most unfortunate reversals in American policy.”

The trouble began when, just after the United States voted in the United Nations for the partition of Palestine into separate Arab and Jewish states, the State Department’s “striped pants boys," as Truman liked to call them, convinced him to halt all military shipments to the Middle East – despite the fact that Britain was arming the Arabs and no one the Jews. Then, the day after Truman privately assured Chaim Weizmann of his commitment to partition, the U.S. Ambassador to the U.N. announced that, as peaceful partition seemed impossible, the U.S. recommended abandoning the partition plan and called, instead, for U.N. rule in Palestine. “This morning I find that the State Dept. has reversed my Palestine policy,” Truman wrote in his diary. “The first I know about it is what I see in the papers! Isn’t that hell? I’m now in the position of a liar and a double-crosser. I’ve never felt so [...] in my life.” Three weeks later, on March 25, 1948, Truman seemingly tried to have it both ways – his and the State Department’s. He told reporters that it might be a good idea to have a U.N. “trusteeship” for Palestine after the British left in May, but he was still for partition. It was into this fray that a first-term Catholic Congressman from Boston stepped on April 4, 1948: speaking to Massachusetts Jewish War Veterans, John Fitzgerald Kennedy denounced the “unfortunate reversal… of our policy towards Palestine” as “one of the most discouraging aspects of recent American foreign policy.” He reminded his audience that “since the end of the first World War successive Presidents and Congress have 'reaffirmed' the solemn promise of the Balfour declaration” and demanded “explanation from the Administration” as to the “sudden reversal of our position in relation to the partition of Palestine.” Perhaps, he added, there may be sufficient cause for the reversal in Palestine. “If there is,” he emphasized, “we are entitled to know what it is.” Present here, then, are the notes for that speech.

Kennedy was the son, of course, of Joseph P. Kennedy – who, as an anti-Semitic appeaser of Hitler, had served as ambassador to England a decade before. These notes, however, and the speech delivered from them, mark JFK’s critical, and early, difference from his father. Congressman Kennedy’s remarks reflected, in fact, his own shrewd appraisal of the Palestinian situation, made on-the-spot in 1939 when, as a student, he traveled to Jerusalem and wrote at length (to his father) about the knotty historical intractability of the political situation.

Since the end of first World War successive Presidents and Congress 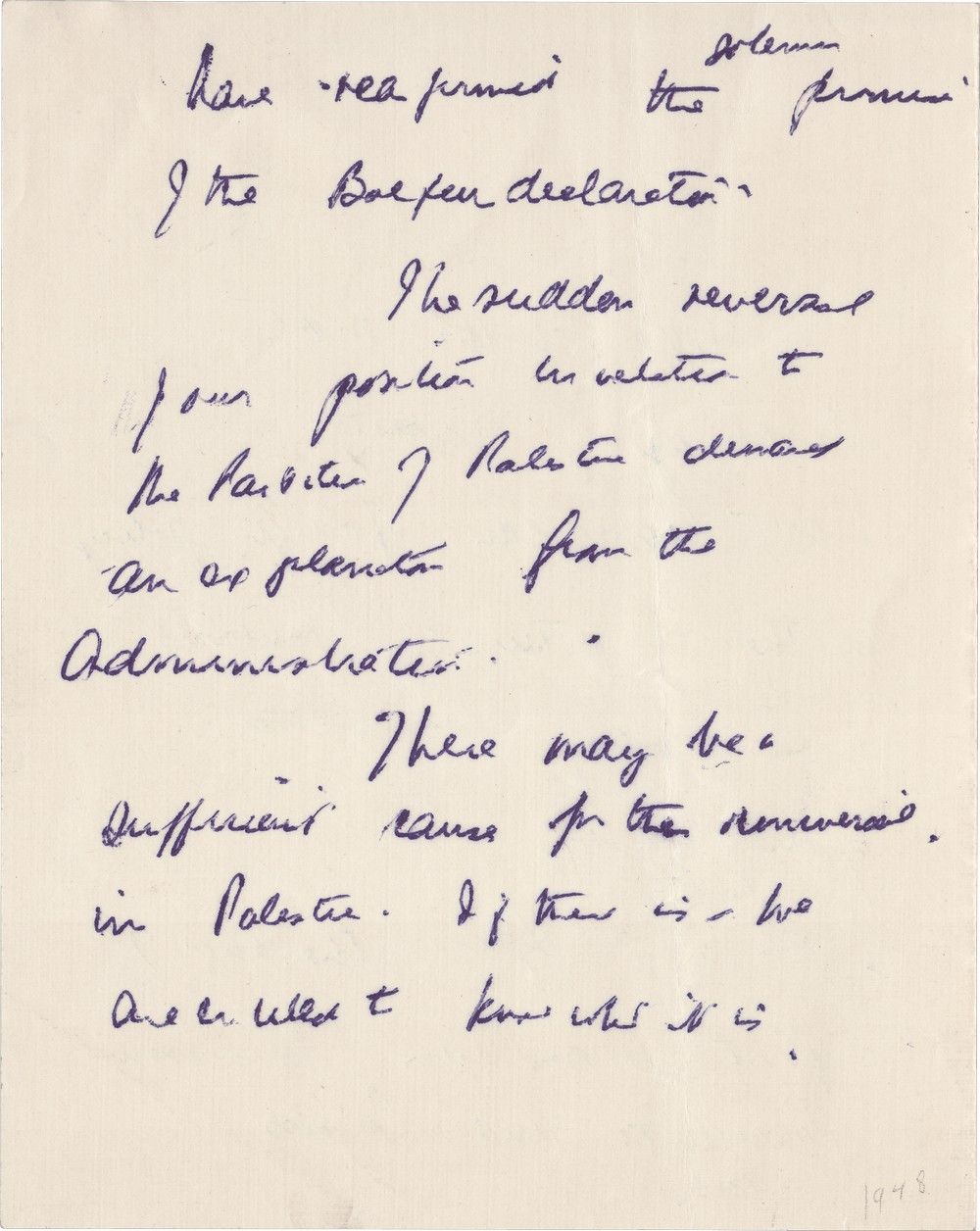 have 'reaffirmed' the solemn promise of the Balfour declaration.

The sudden reversal of our position in relation to the Partition of Palestine demands an explanation from the Administration.

There may be sufficient cause for the reversal in Palestine. If there is, we are entitled to know what it is.