Kristallnacht. The word is German, and up until 10 p.m. on November 9th 1938, it meant “crystal night.” By November 10th, it had become “the night of broken glass”, and meant terror. In the Nazi-sponsored pogrom that raged for those two days throughout Germany and Austria – memorialized by the smashed windowpanes of 7,500 Jewish-owned businesses – Jews were murdered, beaten, raped, humiliated, and for the crime of being Jewish, rounded up and sent to concentration camps. Jewish hospitals, schools, and cemeteries were vandalized and destroyed; synagogues were burnt. The German “authorities” did nothing, of course, to stop the violence. What was worse, neither did anyone else. The United States, alone among the nations, did recall its ambassador – but that nicety neither cut off diplomatic relations nor opened up immigration. The lesson for Hitler was clear: Jews could be killed with impunity. Indeed, speaking to the German parliament just weeks later, he taunted the democracies as “oozing sympathy” for the Jews but remaining “hard-hearted and obdurate when it comes to helping them.” What was coming, he declared, was “the annihilation of the Jewish race in Europe.” It was hardly a surprise, then, when the horror begun on Kristallnacht had metastasized into the Holocaust, that few in the United States government were particularly concerned with saving Jewish lives. But Oscar Chapman, the Assistant Secretary of the Interior, was different, as his 1943 letter attests.

“In early 1943, a Gallup poll asked Americans: ‘It is said that two million Jews have been killed in Europe since the war began. Do you think this is true or just a rumor?’ Although the Allied leadership had publicly confirmed that two million Jews had been murdered, the poll found that only 47% believed it was true, while 29% dismissed it as a rumor; the remaining 24% had no opinion.” – Rafael Medoff, “We Will Never Die”: Shattering the Silence Surrounding the Holocaust, The Holocaust Encyclopedia. Secretary of the Interior on a campaign to stop German annihilation of the Jews during WWII. Shapell Manuscript Collection.

In October 1943, the United States government finally began to do too little, too late, to save millions and millions of European Jews from Hitler’s genocidal war of extermination.  As a result of several factors earlier that year – the popular anti-Nazi filmWatch on the Rhine, the failed British-American Bermuda Conference on European Jewry, a campaign of newspaper ads, public rallies, and lobbying on Capitol Hill – a bill was introduced in Congress urging the creation of a U.S. government agency to rescue Jewish refugees. At the resolution hearings, a State Department official wildly exaggerated the number of refugees who had already been permitted to enter the United States – even as a group of senior aides to Treasury Secretary Henry Morgenthau, Jr., were uncovering a pattern of attempts by the State Department to obstruct rescue opportunities and block the flow of Holocaust information to the United States.  This letter from the humanitarian-minded Chapman, to Will Rogers Jr. – with his anti-Nazi Hollywood constituency – shows that at least some of Washington was abuzz, at last, with the news of what Winston Churchill would soon call, in 1944, “the greatest and most horrifying crime ever committed in the whole history of the world.”

“A group of interested persons are meeting together next Sunday afternoon, October 24, to discuss some realistic possibilities for combating the deliberate campaign of annihilation which the Germans are now conducting against the Jewish people of Europe. I am sure you agree that this is not just a problem for Jewish people to work out alone, but one of urgent concern for America and all the United Nations.” Two months later, President Roosevelt established the War Refugee Board, charged with rescuing the victims of Nazism facing imminent death. It received little assistance, financial or otherwise, from other U.S. government agencies. Most of its funding, in fact, came from Jewish organizations. It is thought to have saved between 20,000 to 200,000 Jews.

Ultimately six million European Jews perished, in Nazi ghettoes and death camps, between 1939 and 1945.  254 of them may be laid upon the head of President Roosevelt who, when appealed to for asylum by the Jewish passengers of the German transatlantic liner St. Louis – denied entry at its port of call, Havana, in May, 1939 – never even responded. The refugees were forced back to Europe and over half of them, into the Holocaust.

Typed Letter Signed, as Assistant Secretary of the Interior, 1 page, quarto, on the letterhead of the Department of the Interior, Washington, October 18, 1943.  To Congressman and Mrs. Will Rogers, Jr., of Oklahoma. With the date and place underlined in red pencil, and a filing direction at top. 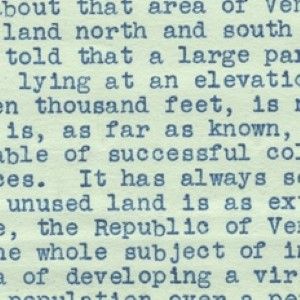