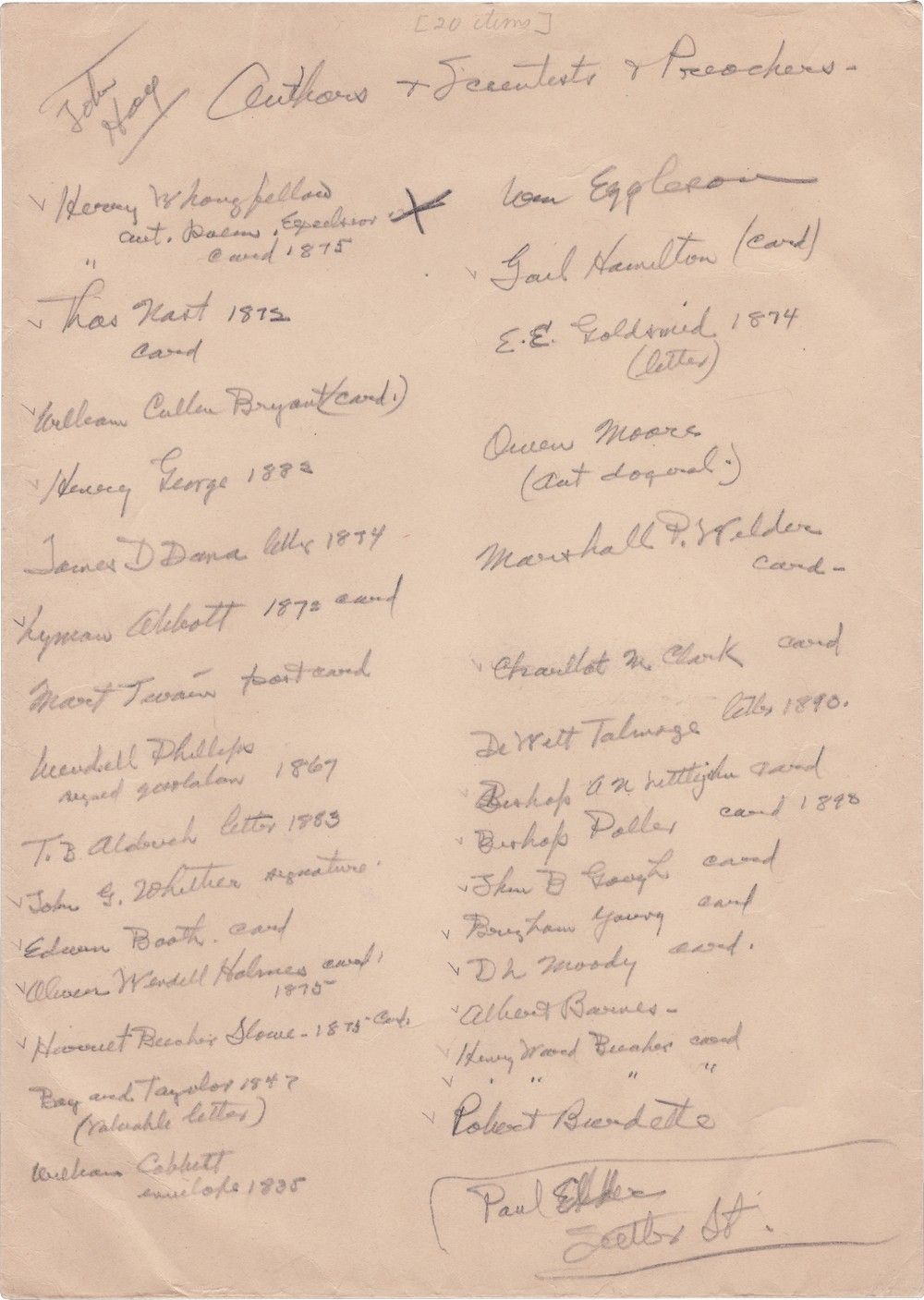 Herbert Hoover collected autographs; here is his handwritten list of his holdings. His collection included Longfellow’s “Excelsior”, a quotation from Wendell Phillips, and a postcard from Mark Twain. Standard 19th century American worthies, such as Bryant, Whittier, Holmes Sr., and Stowe, are represented – but, oddly, no presidents. There is a queen, however -  Victoria -  and the British reformer, Cobbett, along with a handful of New York Mayors. The most valuable piece, Hoover notes, is a letter of Bayard Taylor –  the poet, travel writer, and great chronicler of Palestine and the Levant.
Autograph Note, in pencil; 5 pages, quarto, no place or date.
Read More 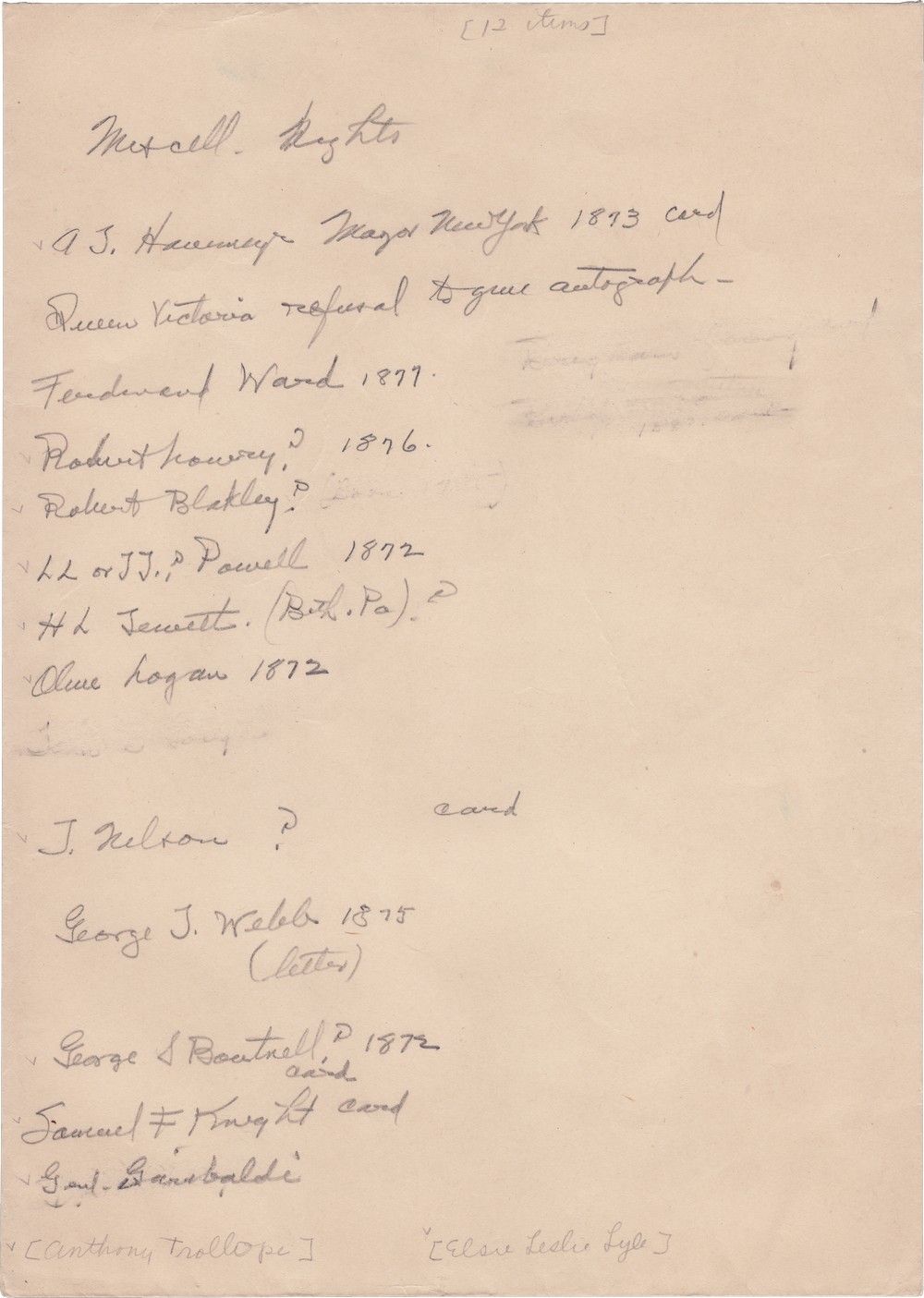 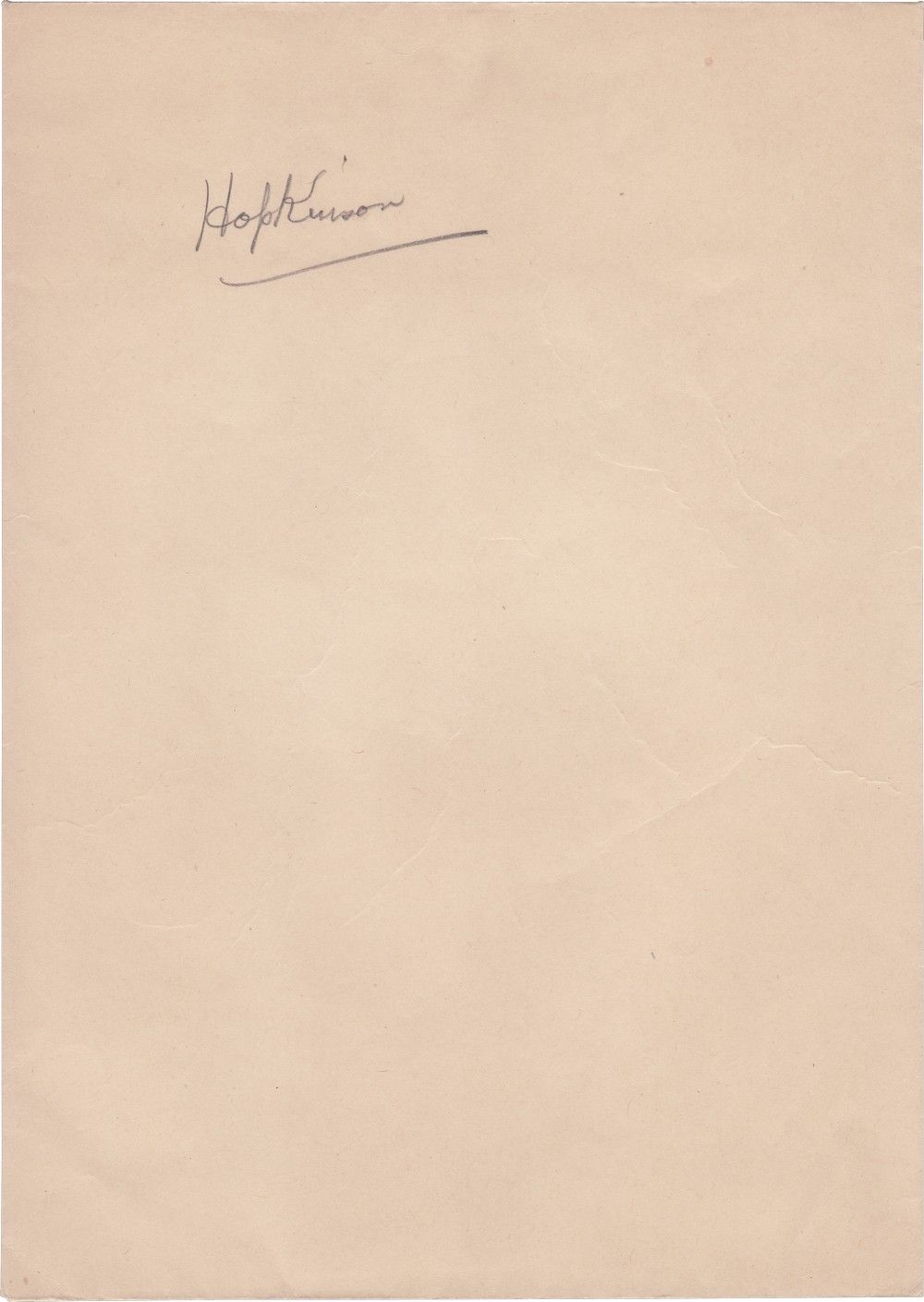 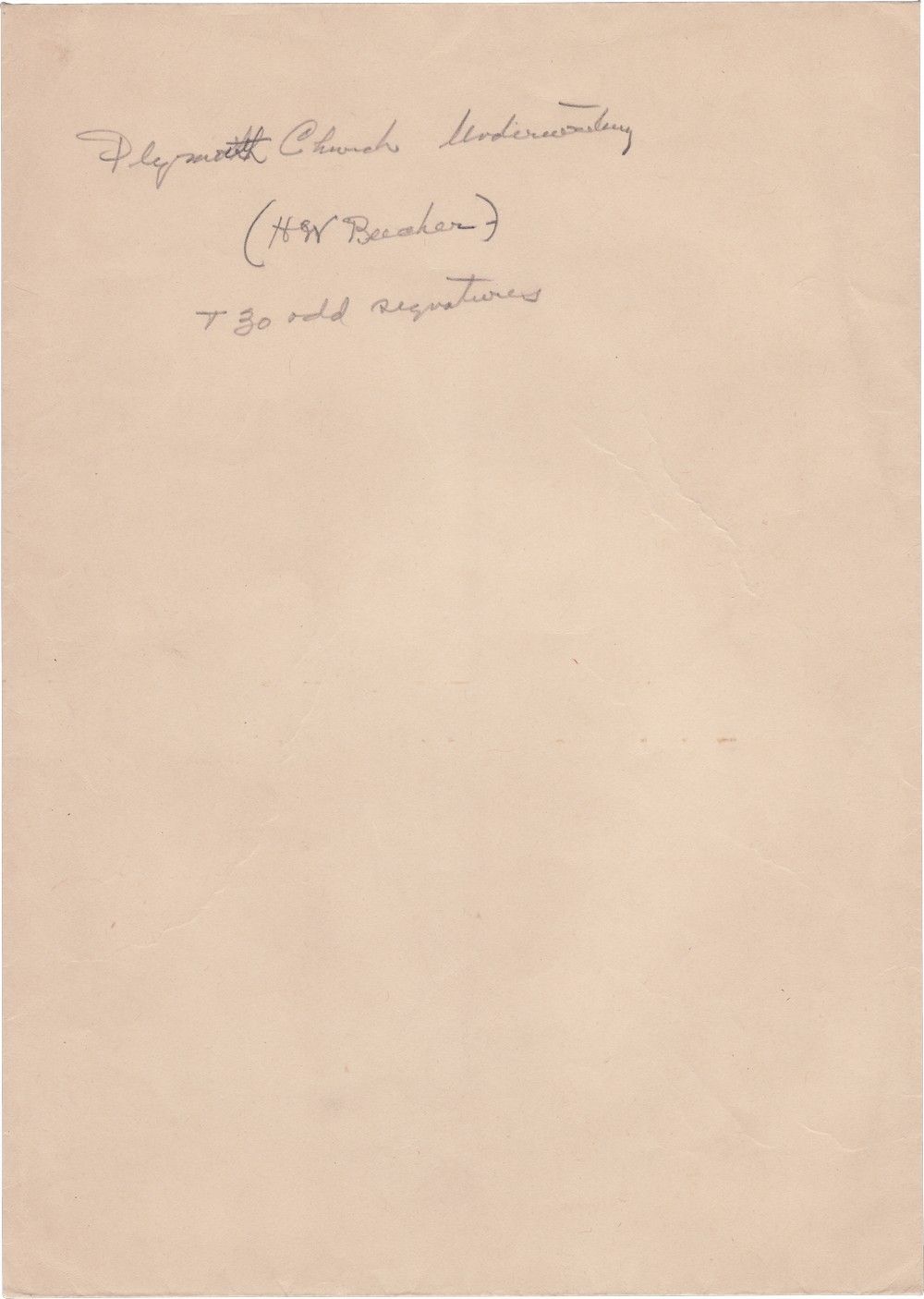 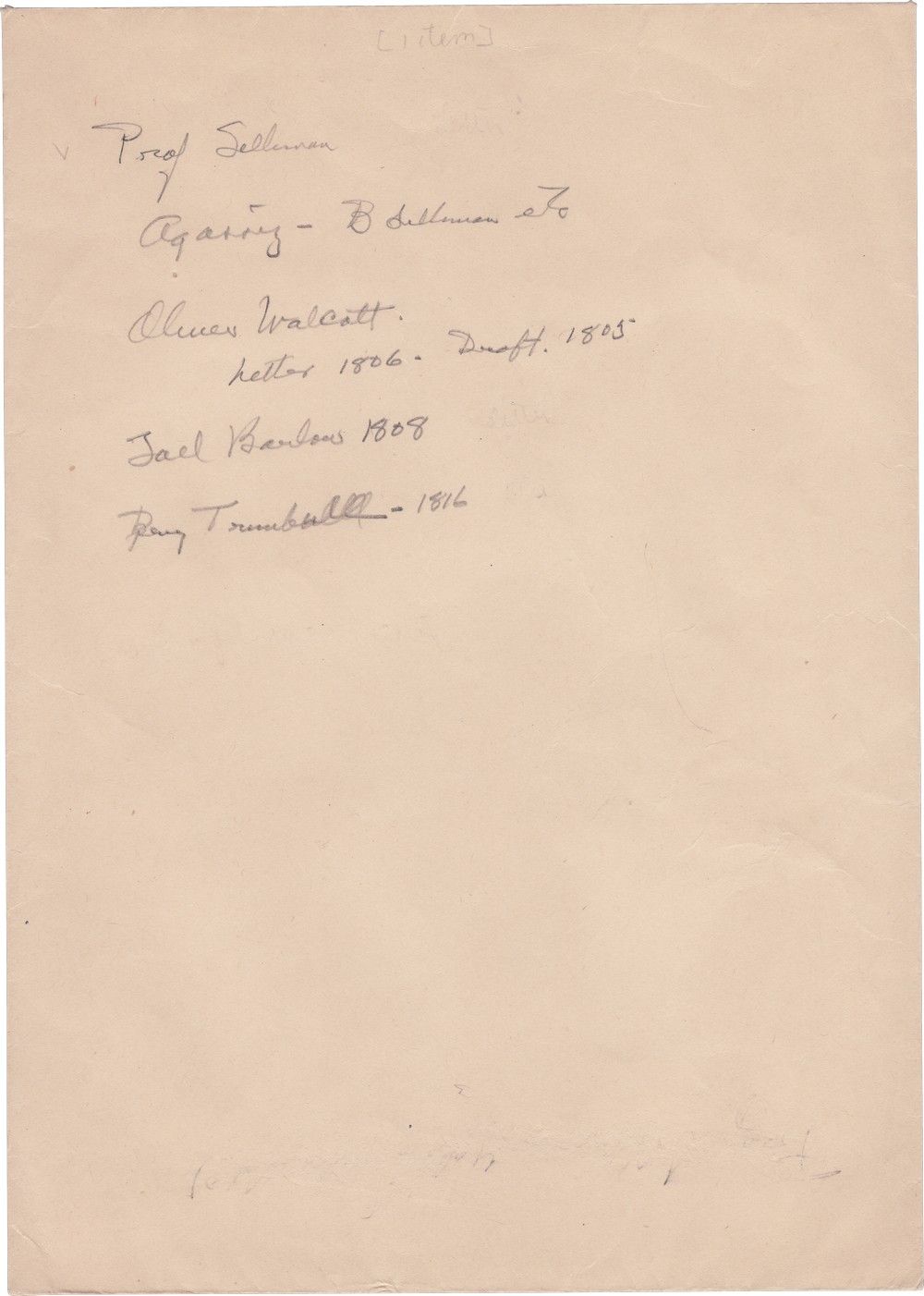 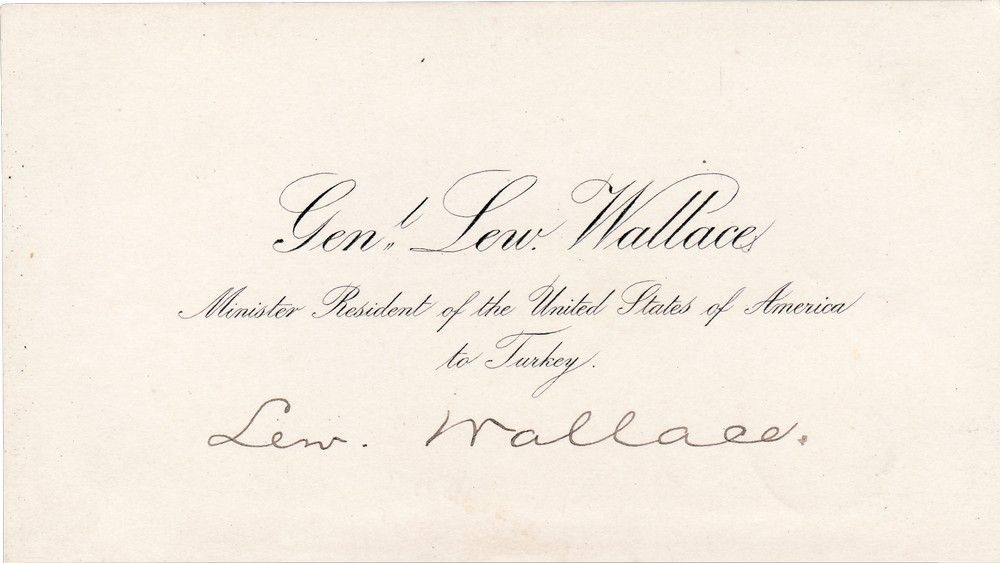 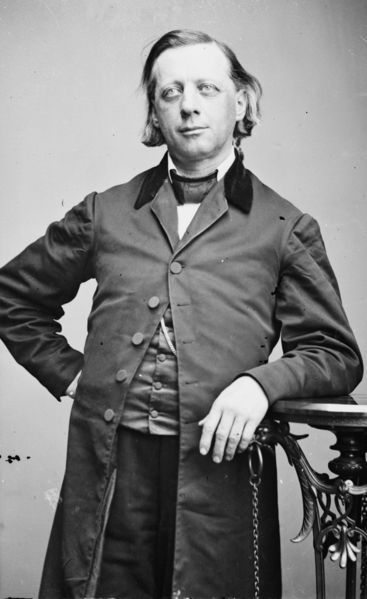 Reverend Henry Ward Beecher is best remembered as the younger brother of Harriet Beecher Stowe, but in his day, he was considered the most famous man in America. A prominent pastor, he broke from the severe preaching style and theology of American Calvinism embodied by his famous father, Lyman Beecher, in favor of a more flamboyant oratory style. Many luminaries flocked to hear him at his Plymouth Church, Brooklyn’s foremost institution and a major stop on the underground railroad. They included Abraham Lincoln, Walt Whitman, and Mark Twain. The Quaker City excursion which launched Mark Twain’s literary career was organized by Plymouth Church, with Beecher scheduled to lead the journey. Though Beecher cancelled at the last minute, his and Twain’s paths would cross again: he gave Twain advice on publishing his experience of the excursion upon his return, and later in life, Beecher approached Twain about publishing his own autobiography, though he died before work would commence on it. Beecher was an ardent abolitionist, and Lincoln himself said of Beecher that “no one in history had so productive a mind.” Beecher left his mark on American Protestantism, moving it from a more stringent Calvinism, in emphasizing Christ’s love. Ironically, it was his emphasis on love that ultimately tarnished his reputation. His alleged affair with the suffragette wife of his long-time friend and fellow abolitionist writer and editor, and one-time assistant, Theodore Tilton, resulted in the most famous adultery trial in America, ending with a hung jury.  This was the second dalliance Beecher had with a married congregant. The 1875 trial finished the careers and standing of the Tiltons, though Beecher retained his influence and flock. In March of 1887, Beecher had a stroke, and died  in his sleep a few days later. He is interred in Brooklyn.