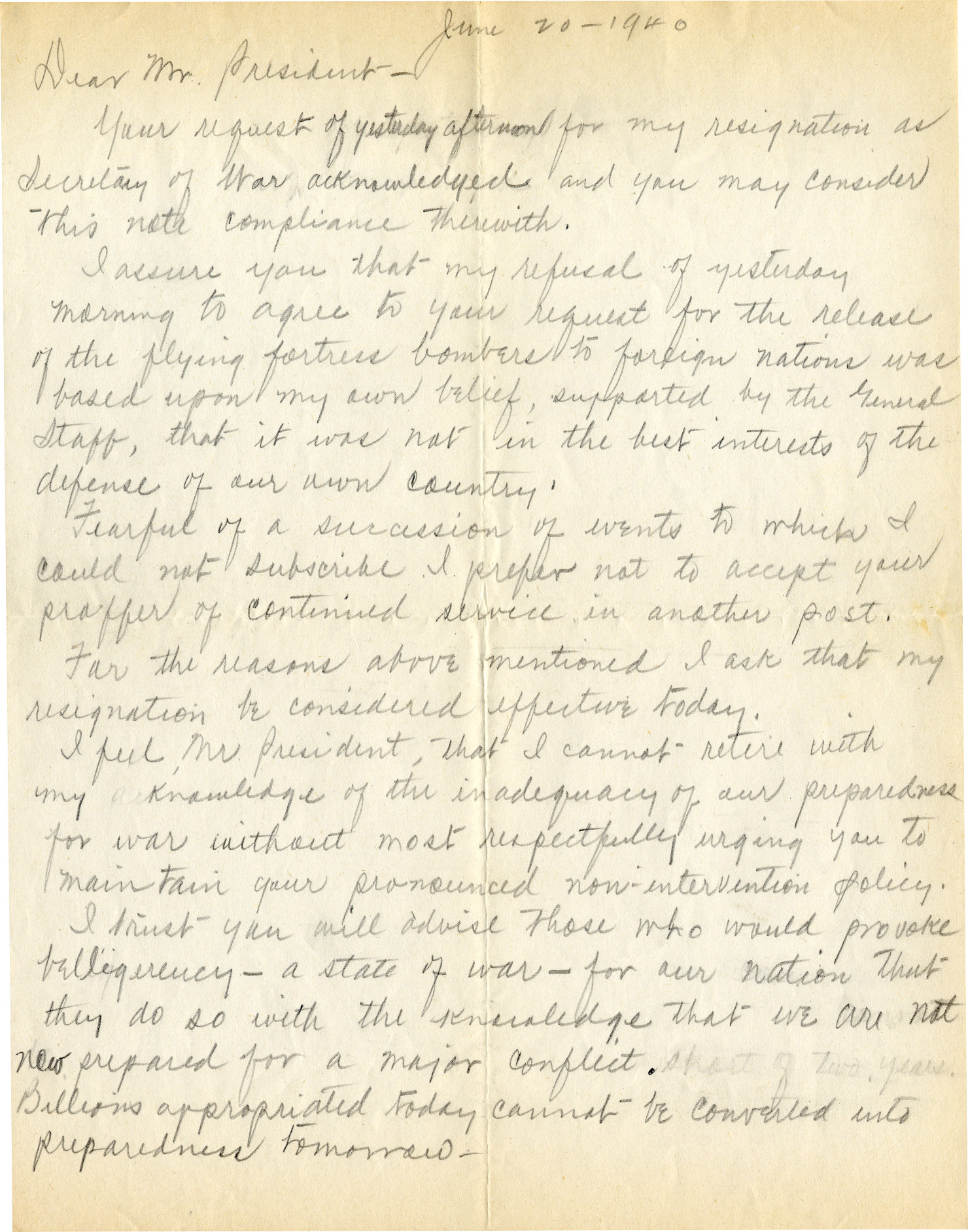 In June of 1940, President Franklin Roosevelt was in a tough spot. The war in Europe was going badly for the Allied powers and a German victory meant serious trouble for American security and American trade. The situation in Britain appeared so bleak that in May, Prime Minister Neville Chamberlain lost a confidence vote in the House of Commons and resigned his post, replaced by Winston Churchill. Italy joined the war on the side of Germany on June 10th. Paris fell to the Nazis on June 14th, six days before this letter. To make matters worse, Japan continued its invasion of China. But before battling foreign belligerents, Roosevelt had to first fight against American isolationism. That meant replacing Secretary of War and steadfast non-interventionist, Harry Woodring.

For several years, Roosevelt had been concerned about Woodring’s commitment to non-intervention. In 1937, Roosevelt had appointed Louis A. Johnson to serve as Assistant Secretary of War. Johnson was a proponent of universal military training, rearmament, and expansion of military aviation, and Roosevelt hoped he would balance Woodring’s position. But Johnson and Woodring clashed so much that they eventually refused to speak to each other. After Woodring declined to resign from his post in late 1938 and again in early 1940, Roosevelt felt the need to require his resignation. The final straw came when Woodring refused to transfer the B-17 “flying fortress” bombers to England after the fall of Paris.

For Woodring, releasing the bombers had two perilous pitfalls – it reduced U.S. defense capabilities and threatened to involve Americans in another European war. But for Roosevelt, releasing more weaponry to Britain was vitally important. It signaled an American commitment to the Allied cause, short of war. Churchill, just after becoming prime minister, messaged Roosevelt that he “needs help badly” and requested “30 or 40 of our old destroyers and also whatever airplanes we could spare right now.” A week later the British ambassador urgently requested the opportunity to purchase “airplanes and various categories of armament and ammunition.” The U.S. ambassador to Britain messaged in early June, “There is constant agitation here in the newspapers, alleging that the Allies have asked for help from the United States; planes are mentioned most often and destroyers occasionally.” The Australian Prime Minister, Robert Gordon Menzies, sent several messages to Roosevelt to plead for more planes for Great Britain and an American declaration of war on Germany. French and British leadership had also begged FDR to declare war. But only Congress could do that. And the American people wanted to avoid another European war, which made a war declaration unlikely, that is, without a direct attack on the United States.

Many Americans felt that participation in WWI had been a mistake and blamed munitions makers and arms transfers for getting the United States into a brutal war. Congress, reflecting the will of the people, sought to prevent a similar situation from happening through legislation. Led by the staunch isolationist Senator Gerald Nye of North Dakota, Congress passed a series of neutrality acts in the 1930s that strictly forbid the export of “arms, ammunition, and implements of war,” as well as loans to belligerent countries. After Germany invaded Poland in September 1939, Congress bowed to Roosevelt’s request and passed a final neutrality act that lifted the arms embargo on a cash-and-carry basis. Basically, the United States could sell weapons to belligerents so long as they paid in cash – no loans – and arranged for their own delivery of materials. Roosevelt had to walk a tightrope: he needed to prepare the country for war without becoming involved, and he needed to assist the Allied powers with war munitions and material aid to prevent a German victory, but not too much to deplete American defense.

The Nazi Blitz of Britain began that September. The long-range B-17 bombers significantly increased Britain’s ability to conduct night-time bombing raids of industrial areas in Germany. American war materials continued to flow to Europe. In December 1940, Roosevelt declared that the United States would be a “great arsenal for democracy.” Congress followed the president’s lead and in March 1941 passed the Lend-Lease Act, which replaced cash-and-carry and enabled Roosevelt to either lend or lease U.S. supplies to any nation deemed “vital to the defense of the United States.” However, the spat between Roosevelt and Woodring, and indeed between interventionists and non-interventionists, would continue to make headlines in newspapers and inspire impassioned debates in Congress.

Your request of yesterday afternoon for my resignation as Secretary of War acknowledged and you may consider this note compliance therewith.

I assure you that my refusal of yesterday morning to agree to your request for the release of the flying fortress bombers to foreign nations was based upon my own belief, supported by the General Staff, that it was not in the best interests of the defense of our own country.

Fearful of a succession of events to which I could not subscribe I prefer not to accept your proffer of continued service in another post.

For the reasons above mentioned I ask that my resignation be considered effective today.

I feel, Mr President, that I cannot retire with my knowledge of the inadequacy of our preparedness for war without most respectfully urging you to maintain your pronounced non-intervention policy.

I trust you will advise those who would provoke belligerency - a state of war - for our nation that they do so with the knowledge that we are not now prepared for a major conflict. 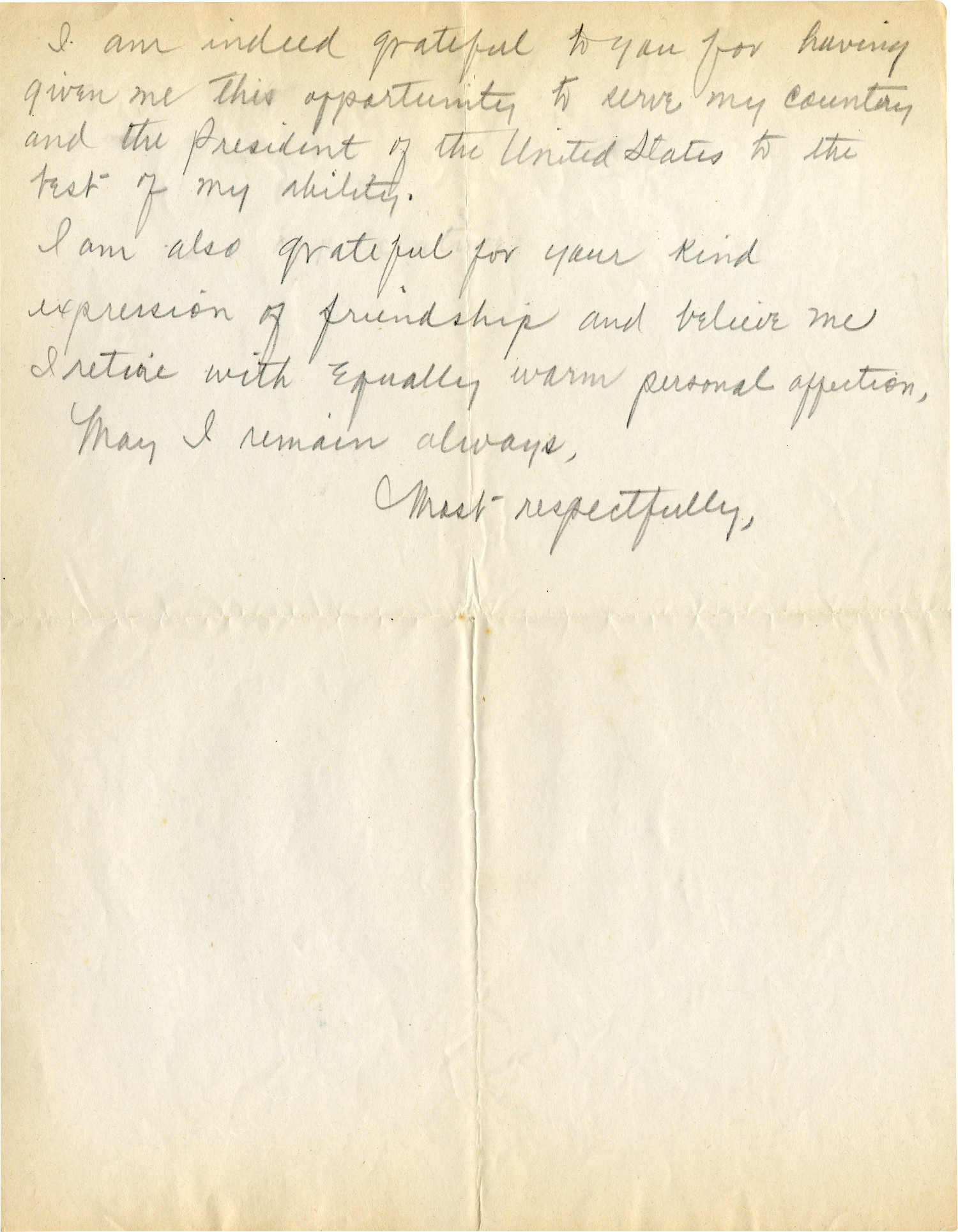 I am indeed grateful to you for having given me this opportunity to serve my country and the President of the United States to the best of my ability.

I am also grateful for your kind expression of friendship and believe me I retire with equally warm personal affection.

May I remain always,