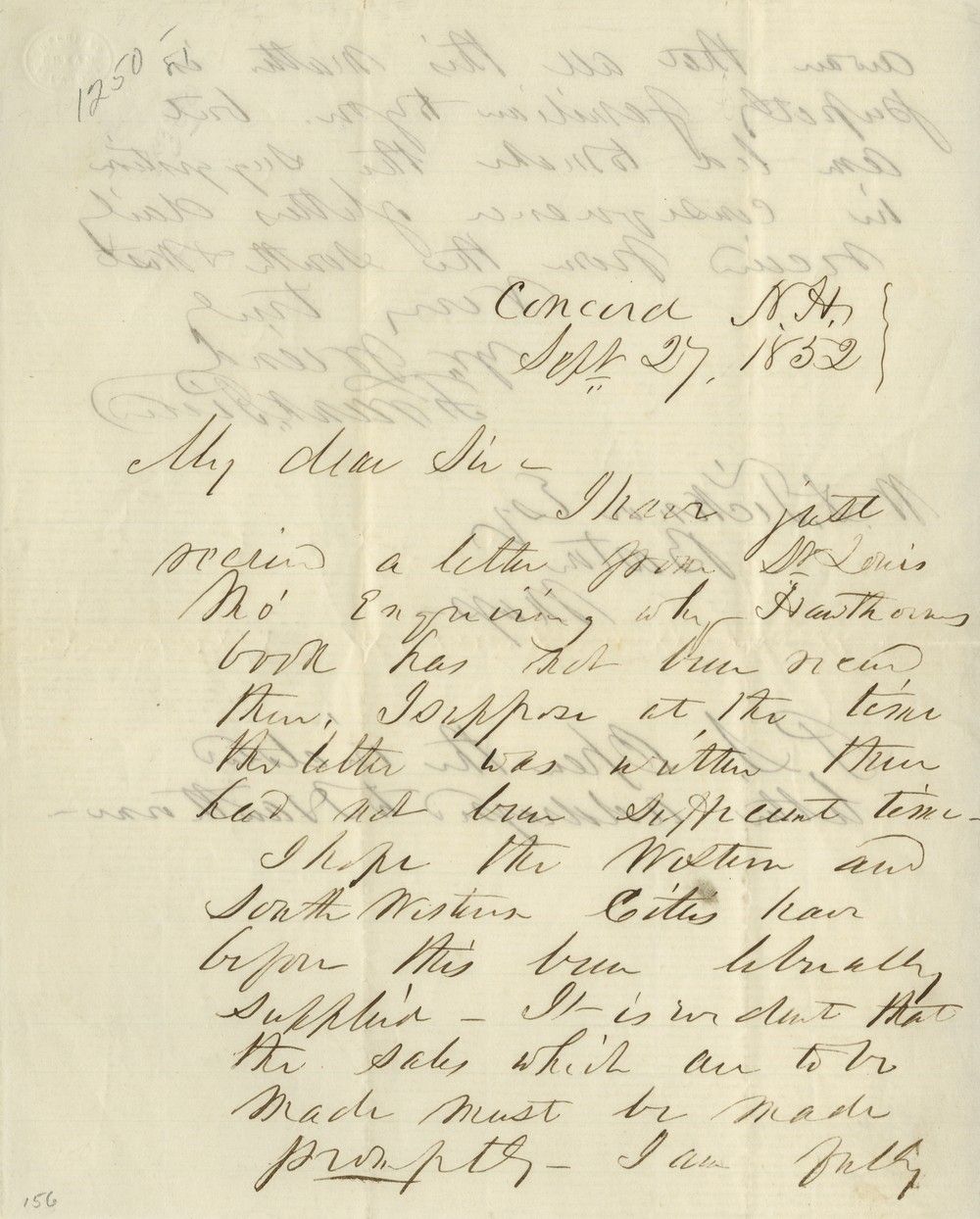 Low politics and high literature would have seemed to have met for the first time in American life in September, 1852, when the first copies of Nathaniel Hawthorne’s campaign biography of Franklin Pierce rolled off the presses of Ticknor, Reed and Fields in Boston [see Pierce inscribed copy to Butterfield, October 16, 1852]. In the seven weeks that remained before the general election, the publishers produced more copies of the Life of Franklin Pierce than of any previous book in the firm’s history, and made exhaustive efforts to sell the work nationally – but as this letter evinces, the subject of the biography, presidential candidate Franklin Pierce, was not satisfied. Upset that he is hearing that the book has yet to arrive in the West – St. Louis, Missouri – Pierce tells Ticknor what he is sure the publisher knows: with the election a month away, the West and Southwest need to be “liberally supplied” with “Hawthorne’s book” as “the sales which are to be made must be made promptly.”

When Pierce was nominated, Nathaniel Hawthorne - his friend from Bowdoin College - offered to write the requisite campaign biography, but demurred that others could produce it faster, and probably better. Pierce was delighted to “have” Hawthorne, however, and so the famous novelist slowly set to describing the pro-slavery rumored alcoholic as “a man of peaceful pursuits” who saw slavery as something that could not “be remedied by human contrivances” but would, over time, “vanish like a dream.” The result was, some wagged, the greatest work of fiction Hawthorne ever wrote, but 13,000 copies sold. To what degree Hawthorne’s biography helped Pierce win the election was, then and now, incalculable; easier to count would be the money made by Hawthorne when appointed by Pierce, in gratitude, to the lucrative consulship at Liverpool.

Pierce and Hawthorne would remain friends until the latter’s death - literally, under Pierce’s roof [see Pierce letter dated May 19, 1864]. The author had been ailing, and Mrs. Hawthorne sent her husband to his friend of forty-five years, in the vain hope that if anyone could make Hawthorne better, it would be he. But on the third day of their visit, Hawthorne died in his sleep, his body to be found when Pierce woke in the night to check on him. The next day, too, Pierce made another deeply affecting discovery. Going through the author’s few things, he found at the bottom of a valise a billfold, seemingly empty, but for one thing - a photo of himself. Hawthorne, apparently, always carried it with him.
Autograph Letter Signed, 2 pages, recto and verso, quarto, Concord, N.H., September 27, 1852. To publisher William D. Ticknor in Boston.
Read More 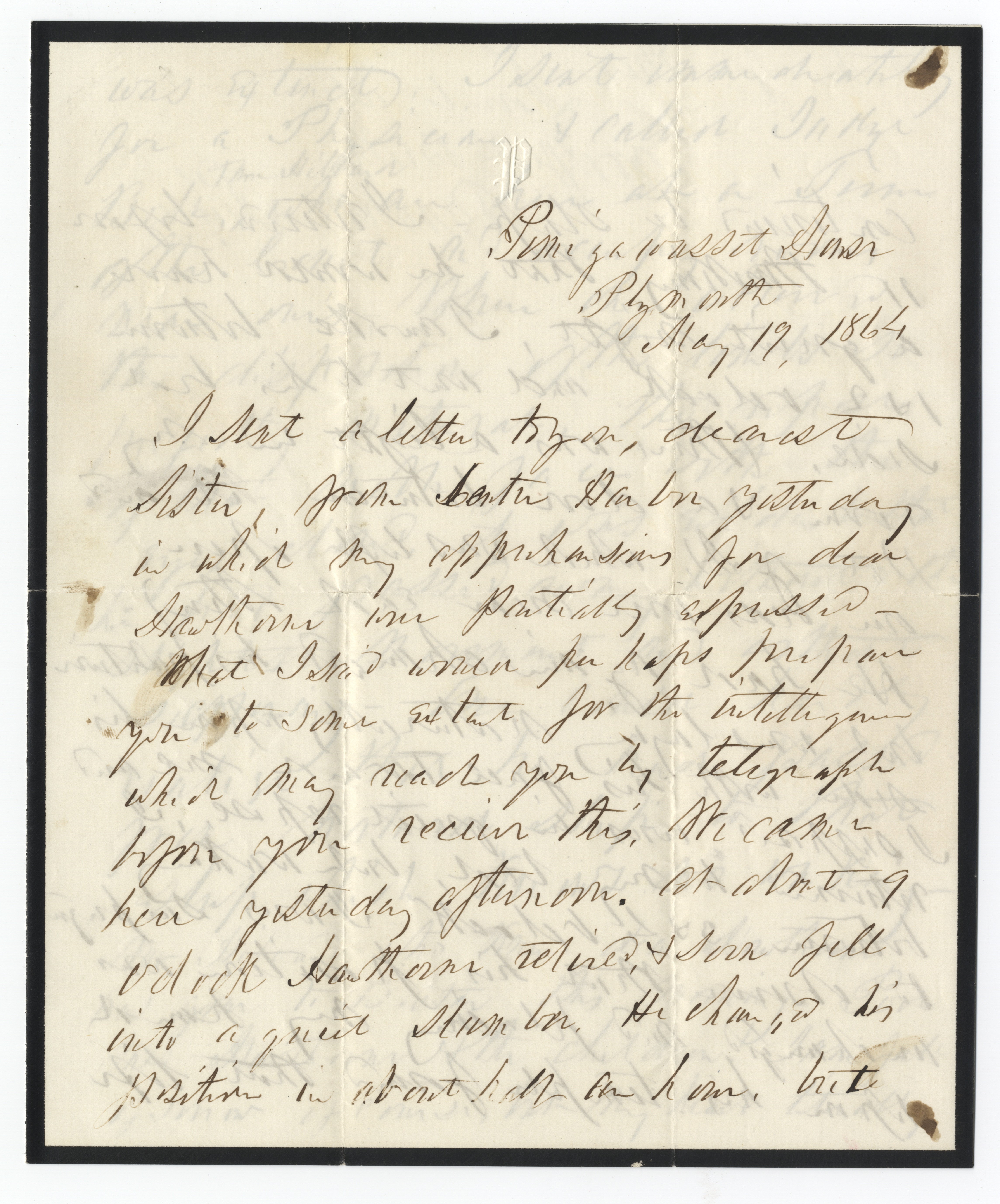 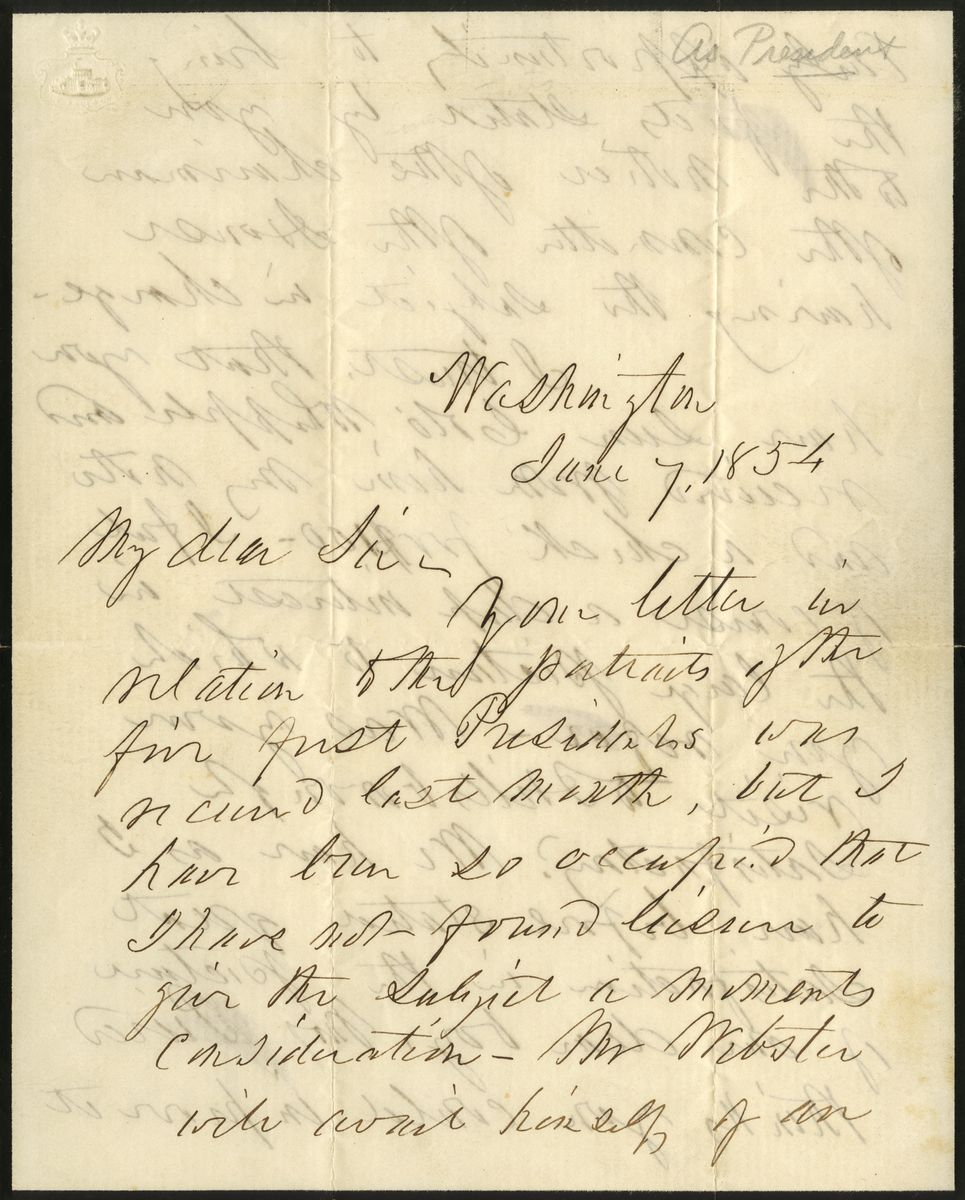 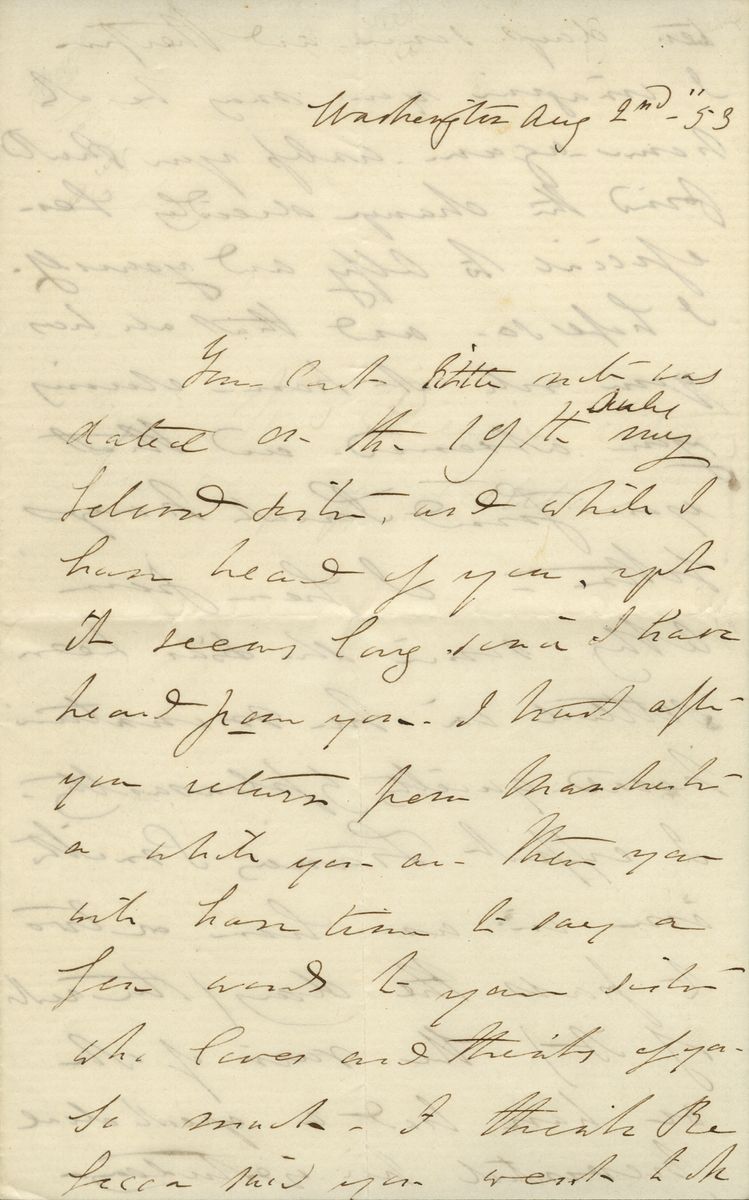 I have just received a letter from St. Louis Mo' enquiring why Hawthorne[']s book has not been received there. I suppose at the time the letter was written there had not been sufficient time. 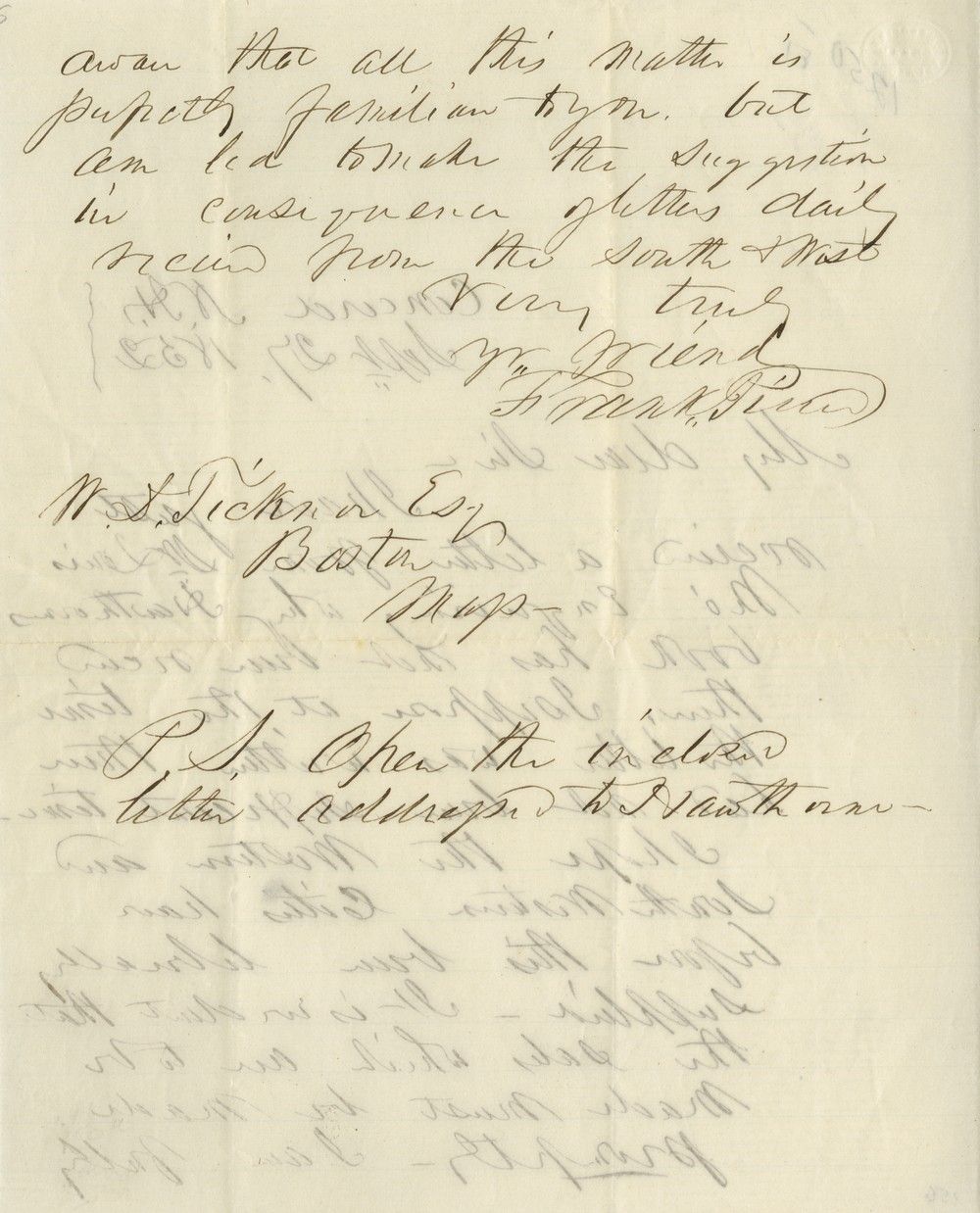 aware that all this matter is perfectly familiar to you, but am led to make the suggestion in consequence of letters daily received from the South & West[.] 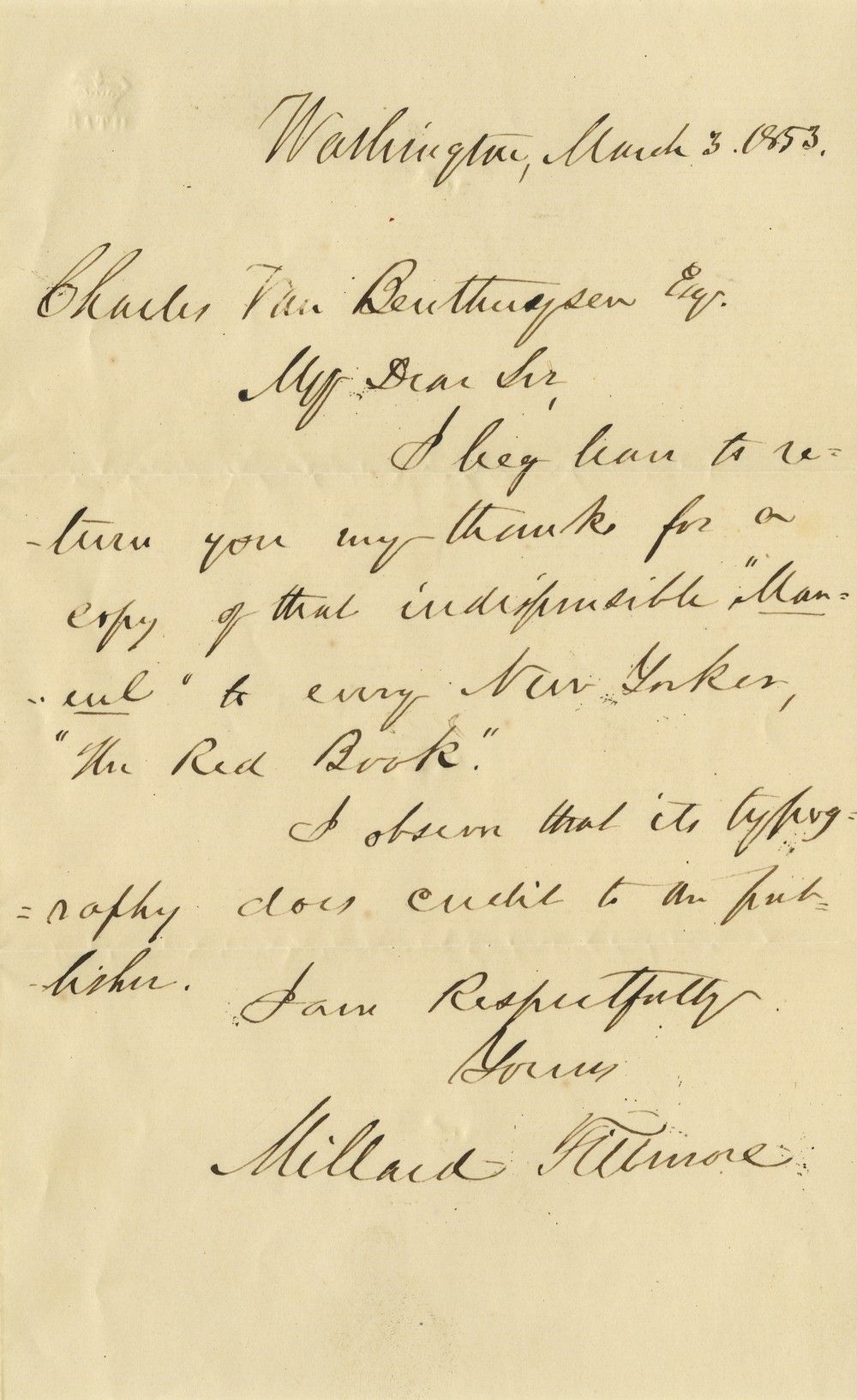 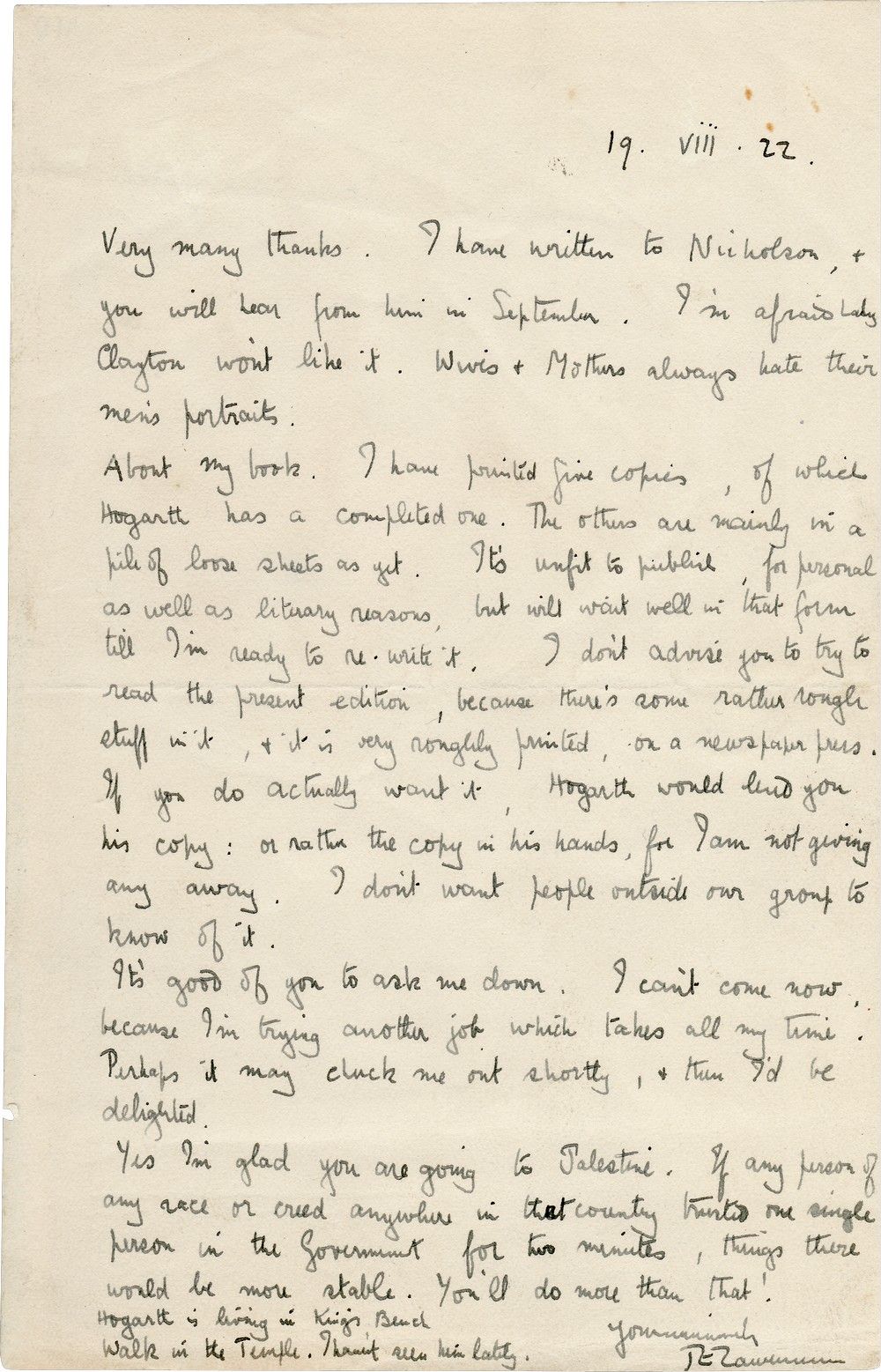 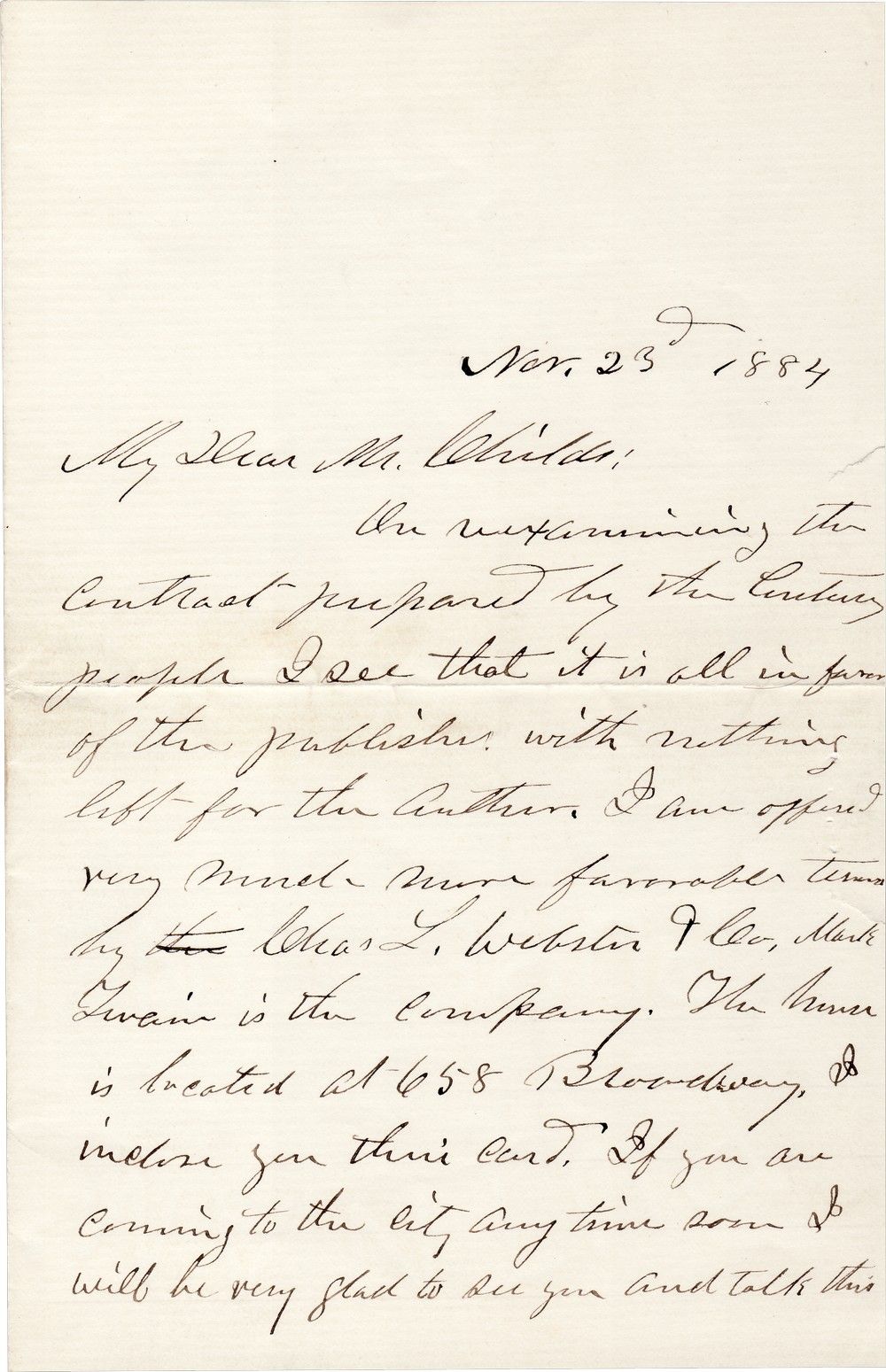