A few days into the new year of 1865, the President and Commander-in-Chief, Abraham Lincoln, wrote to the General-in-Chief of the Armies of the United States, Ulysses S. Grant, about a family problem. It was urgent - and unusual. As a rule, Lincoln's moral standards forbade his using his position of influence for personal gain or convenience, but now, in writing Grant, however modestly, on behalf of his eldest son, Robert Todd Lincoln, he may have veered a step off his own narrow ethical path. “Please read and answer this letter as though I was not President, but only a friend,” Lincoln requested. “My son, now in his twenty-second year, having graduated at Harvard, wishes to see something of the war before it ends. I do not wish to put him in the ranks, [nor] yet give him a commission, to which those who have already served long, are better entitled, and better qualified to hold. Could he, without embarrassment to you, or detriment to the service, go into your Military family with some nominal rank, I, and not the public, furnishing the necessary means? If no, say so without the least hesitation, because I am anxious, and as deeply interested, that you shall not be encumbered as you can be yourself.”

Two days later Grant replied that he should be most happy to have Robert Todd Lincoln on his staff – although he ought to be paid as other officers and not, as Lincoln believed proper in the case of "cosmetic" appointments, privately. "Your favor of this date in relation to your son serving in some Military capacity is received," Grant began. "I will be most happy to have him in my Military family in the manner you propose. The nominal rank given him is immaterial but I would suggest that of Capt. as I have three staff officers now, of considerable service, in higher grade. Indeed I have one officer with only the rank of Lieut. who has been in the service from the beginning of the war. This however will make no difference and I would still say give the rank of Capt. Please excuse my writing on a half sheet. I had no resource but to take the blank half of your letter.''

In this way, then, was settled a problem which had bedeviled the Lincolns since the beginning of the War. Robert had wanted to enlist; his mother, fearful of losing yet another son, had wanted anything but; and Lincoln, torn between his concern for his wife’s sanity, his son’s unhappiness, and the bad press which would, and did, come his way - Lee’s three sons, for instance, all serving on the battlefield – wanted, apparently, to put off a resolution of the situation for as long as possible. But with the end of the War clearly in sight, Lincoln arranged for his son to serve, at last. Robert Todd Lincoln's commission as an assistant adjutant general with the rank of captain was nominated to the War Department on February 11, 1865, and to the U.S. Senate, on the 14th. Captain Lincoln officially entered the Army on February 20th - accepting his commission, signing the oath of office, and leaving Washington to report to Grant's headquarters in Virginia. At what point - or last minute - his father the President gave him this check, dated February 20, 1865, for $25.00, is not known: no doubt it was money (worth about $375.00 today) with which his son might be thoroughly kitted out for war.

Robert Todd Lincoln resigned his commission on June 10, 1865. He was 22, fatherless, and according to the Victorian mores of the day, responsible for his grieving mother, his younger brother, and of course, himself. This check was the last he would receive from his father.
Check Signed (“A. Lincoln”), partially printed and accomplished in autograph, as President, being check No. 27 drawn on Riggs & Co., Washington, D.C., February 20, 1865;  oblong duodecimo. In favor of R.T. [Robert Todd] Lincoln, in the amount of twenty five dollars. 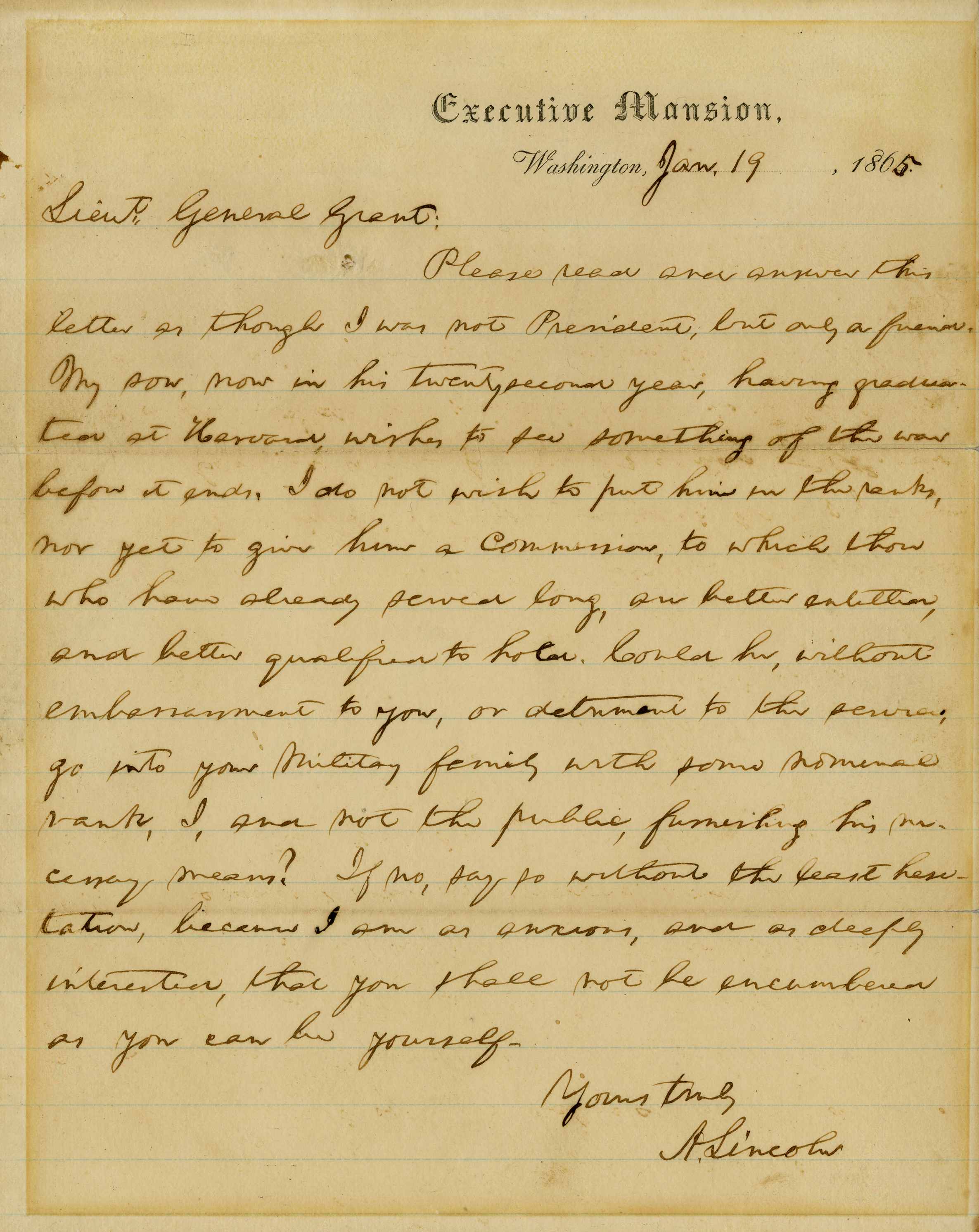