If, as a rule, good stories traverse “before” and “after,” then this one is a dilly. Before, there was a ten-mile long mosquito-laden swamp in South America; afterward, there was a major world power in North America. Bridging the two, in the words of a dismayed politico, was that “damn cowboy in the White House” – Theodore Roosevelt. This letter, written by President Roosevelt from the Panama Canal Zone, tells that story or, at least, the last part of it. It began, after all, in the 16th century….and yet continued, all the way to the end of the 20th century, because in 1977 President Jimmy Carter, as different a president than Theodore Roosevelt imaginable, had given back TR’s Canal to the country of Panama in a two-part treaty by which United States relinquished control of the Panama Canal, finally, on December 31st, 1999.

Travel is often a bother. There are difficulties with which to contend: heat, cold, wear and tear, crowds, and sometimes even, a spot of danger. Yet most journeys, however uncomfortable, are streamlined. Some even involve passage through the engineering marvel that is the Panama Canal; it takes, nowadays, about 8 hours or so to pass through it from the Atlantic to the Pacific Ocean.  It was not, however, always so easy.

In 1513, for instance, it took the Spanish explorer Vasco Núñez de Balboa, searching for gold, 24 days to cross the Isthmus of Panama from one ocean to another. Heavily guarded by allied local men and fierce dogs, Balboa’s group canoed and hiked their way across the isthmus, battling local tribes in the thick jungle before reaching, for the first time, the Pacific Ocean. It had taken him a couple months to sail there to begin with, from Spain. Fast-forward a few hundred years, and the search for gold was still on, albeit this time, from New York to San Francisco. Three routes to these marveled sudden riches were available, in the years immediately following the 1849 California gold strike, and at stake in all of them, was life, time, and money.

You could go from, say, the East coast of the U.S. to the West, overland – and risk dying of starvation, thirst, the elements, disease of course, and indigenous peoples hell-bent on protecting their land from trespass. Or you could sail, but that involved a voyage around Cape Horn, a maritime nightmare, what with the Cape’s chaotic waters, icebergs, huge waves, and gale-force winds. If you escaped that watery graveyard, the trip took six months. The fastest, and cheapest, route to El Dorado was a Pacific Mail Steamer from Manhattan to the mouth of Panama’s Chagres River.  At which point you took a canoe to the village of Chagres; another canoe – this one hallowed from a tree – up the fast-flowing Chagres River, through dense tropical foliage; disembarked in the village of Gorgona, for horses; rode 20 miles to Panama City on the Pacific Coast, and then sailed from Panama City to San Francisco, where you often found yourself stranded and unable to sail back East, as the boat crews often stayed in the West, themselves having deserted the boats for the goldfields. Nor was going from West to East any easier. When the young journalist Mark Twain left San Francisco in December 1866 for New York, where, a few months after arrival, he would become aware of the upcoming voyage of the Quaker City pleasure cruise to the Holy Land and embark from New York (and so write his planetary bestseller, Innocents Abroad, about it), his trip would take 27 days – of which three were spent trekking across the Nicaraguan isthmus. Traveling on a route developed by Cornelius Vanderbilt in the 1850s, he went by mule-drawn wagon to Lake Nicaragua, by steamboat across the Lake, by stern-wheeler down the San Juan River to, finally, the Caribbean, where he caught a steamship to New York. (That last aspect of his voyage would, between three breakdowns of the ship, and a breakout of cholera among the passengers, prove equally hazardous.)

In fact, just a few years after Twain’s Nicaraguan traverse, an American president, Ulysses S. Grant, charged his new administration with surveying likely routes for a man-made water corridor across Central America. Although the U.S. Congress had since 1826 been interested in an interoceanic canal, and in 1835, President Andrew Jackson even advocated for one, for Grant the issue was less about a better national future than a harrowing personal past. As a young Army captain, he had led in July 1852 some 730 troops and their families across the Isthmus of Panama on their way to garrison duty in California.  “The horrors of the road in the rainy season,” he later wrote, were “beyond description.” The lives of 150 men, women and children were lost. Knowing, then, only too well the nightmarish hazards of such land crossings, Grant created an Interoceanic Canal Commission to consider all the surveys, plans and proposals for a canal, and report back on the most viable proposition. It selected, in 1876, the Nicaragua route. But Grant was soon out of office, and the project, seemingly dropped.

Meanwhile, across the Atlantic, by 1880 the French, having just built the Suez Canal in the desert, decided to take a whack at building another, this one through Panama – and so began excavating its deep swamps, dense jungles, rocky mountains, fast-rushing rivers – in, of course, the Isthmian heat, humidity and torrential rain. A decade later, tropical disease had (unsurprisingly) killed 20,000 workers, and the French attempt was finis.

It wasn’t until the turn of the 20th century when the United States, led by the intrepid Theodore Roosevelt – ever mindful of naval power – decided that it was not only a vital matter of American lives, time and money, but national principle, to create an American-controlled waterway across the Panamanian isthmus. Indeed, it was even in his own vital interest, what with an election looming in 1904; he wanted to “make dirt fly.” Thus he got the Senate to approve a treaty with Columbia over the dispensation of its province of Panama; which, in turn, the Columbian Senate refused to ratify; which then caused Roosevelt to send naval warships in support of an independent Panama: with the result that the newly declared Republic of Panama signed a treaty with the United States – 10 miles for ten million – and the American-controlled isthmian canal made the United States, overnight, a global power. 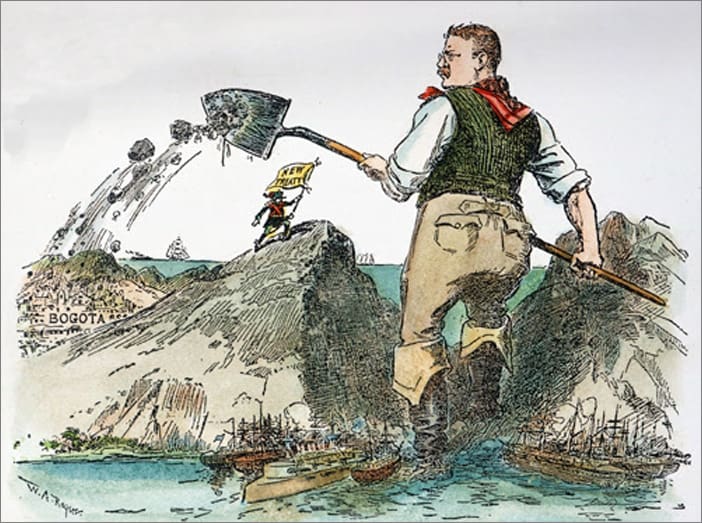 What he saw was how American industrial know-how, and American medical science, was making a Canal, somehow, possible. Yet to Roosevelt, the Canal was more than the exercise of modern vigor: it was the fulfillment of history. “I kept thinking,” he wrote his son, “of the four centuries of wild and bloody romance… I could see Balboa crossing…and the wars between the Spanish and the Indians… the advent of the buccaneers… and the wild destruction they wrought.”

When it was all over, Roosevelt described his momentous acquisition of the Panama Canal simply: “I took the Canal Zone,” he said, “and let Congress debate.” His audacity involved aiding an insurrection, protecting a government, signing a treaty, and making, at last, the dirt fly. His ally in this was the Panamanian patriot, Dr. Manuel Amador Guerrero who, as the first President of Panama, received Roosevelt when he visited the Canal Zone in November, 1906 – a trip which made Roosevelt the first president to officially visit a foreign country while in office. The day before he left Panama, he sent this letter of thanks, to Amador, with the letter including the groundbreaking notation that it was written from “Ancon, Canal Zone” typed in alongside the date:

The box with those very interesting and curious antiques has just come. I not only value them greatly for themselves, but I am profoundly touched at this fresh proof of your thoughtful kindness, my dear Mr. President, coming as it does on the repeated and gracious courtesy of your charming wife to Mrs. Roosevelt; and after the more than kind and cordial reception which you and the Senora have extended to us.  It is difficult for me to express on behalf of Mrs. Roosevelt and myself how profoundly touched and pleased we are. Universal Interoceanic Canal Company at the foot of the Gold Hill in the Culebra Cut 1896. Inadequate machinery, such as the tiny dump cars and the Small Belgian Locomotive Shown here contributed to the failure of the French effort to link the Atlantic and the Pacific. This photo of an old bucket excavator at work in Culebra Cut at the foot of Gold Hill was made in 1896. Source: archive.org Panama, Past and Present by Bishop, Farnham - Publisher: New York, The Century Co. Wikimedia.

Roosevelt’s delight with Amador, however, did not stop him from sending American troops to insure that the Panamanian election of 1908 was free from interference – with the result that Amador was defeated. But what mattered most to Roosevelt and soon enough, to the world, was that the shortest passageway between the Atlantic and Pacific Oceans was firmly under U.S. control – and would so remain, until 1999, the very end of the “American Century” …

In 1977, in what would prove a deeply controversial application of his constitutional power to make treaties with “the advice and consent” of the Senate, President Jimmy Carter managed, by a single vote – against raging public opinion – to ensure the passage of two Panama Canal Treaties. The first provided that the United States reserved its right to defend the Canal forever; the second declared that by December 31, 1999, the U.S. would completely transfer operation of the Canal Zone to Panama.