Before he made the desert famous, in the far-off Holy Land, young Sam Clemens traveled to an island paradise, in the guise of the nascent Mark Twain, and so became, through his 1866 newspaper articles, public lectures, and his recounting of the journey in Roughing It, the first American to popularize holiday vacations to Hawaii. This letter tells that story…

Vacation revelers in Hawaii – and there’s about 8 million of them yearly – may want to stop for a moment and consider what, exactly, they owe Mark Twain. That they even went to Hawaii, is in no small part owing to the fact that he went there, almost a century and a half ago, and then told everyone about it. Whether this ultimately did more for Hawaii, or Twain, is debatable; but Twain’s newspaper articles written during the trip, and the lectures he gave afterward, put both of them on the map in a way neither had yet experienced.

By 1865, Twain had been working as a journalist in California, and it wasn’t working out. “A poor, pitiful business,” he said, “scribbling to excite the laughter of God’s creatures.” Indigent, itinerant, a tad too intoxicated, he was “tired being a beggar,” he complained to his brother Orion, “tired being chained to this accursed homeless desert.” That he was tired of his brother as well, also contributed to his despair. The feckless Orion had yet again managed to mismanage the Twain family’s affairs and what had looked like a land deal which would have set them all up for life, reverted from a brief dream of wealth, to what it was before – nothing. When Twain heard, then, that he could get out of town on a steamer bound for Hawaii – or, as it was still called, after the name bestowed upon it by its ill-fated “discoverer” Captain Cook, the “Sandwich Islands” – he leapt at the chance. On March 7th, 1866, having arranged to write articles about the trip for the Sacramento Union, Twain sailed from San Francisco to Honolulu aboard the Ajax, arriving 11 days later. He intended to spend a month; he stayed, instead, for four. Traveling to Maui on April 14th, Twain set out on horseback to tour the paradisiacal island, seeing everything, meeting everyone, trying anything – including, with ill results, surfing. Expecting to fling his board upon the crest of a breaking wave, himself upon the board, and whiz along like a bombshell – he instead parted ways with the board, so that it continued on to the shore in three quarters of a second, as he struck the bottom about the same time, with a couple of barrels of water in him. From these watery depths, Twain headed next to a volcano. Here he makes plans to go see one – in the slightly absurd and mocking style which, transported a year later to a very different world (the Old one), would make it impossible to ever forget his new name: “Mark Twain.” In fact, Clemens had only adopted the pseudonym a scant three years before, and his closing the letter with a reminder of it, suggests his pride in his budding literary identity – and even, perhaps, prescience.

Gentlemen – Don’t you think for a moment of going up on Haleakala without giving me an opportunity of accompanying you! I have waited for & skirmished after some company for some time without avail, and now I hear that you will shortly be at Haiku . So I shall wait for you.

Cannot you let me know just as soon as you arrive, & give me a day or two (or more, even, if possible,) to get there in with my horse? Because I am told the distance hence to Haiku is 15 miles – to prosecute which will be a matter of time, to my animal, & possibly a matter of eternity. His strong suit is grace & personal comeliness, rather than velocity.

(Or “Mark Twain” if you have forgotten genuine name)

My address is “Waikuku Plantation.”

I shall send two or three notes by different parties, for fear one might miss fire – an idea suggested by my own native sagacity. Twain did not describe his visit to Haleakala, however, for the Sacramento Union. Instead he waited to recount the adventure some six years later, in chapter 76 of Roughing It. Without naming his companions, he expounded upon, indeed explained, his pokey nag, and extolled the wonders, at 10,000 feet above sea level, of the “sublimest spectacle” he’d ever witnessed, the memory of which, he wrote, “will remain with me always” By the time Roughing It was published, as a follow-up to Twain’s wildly successful (and insurrectionary) travel book Innocents Abroad (1869), he knew of what he spoke – he’d been to the Azores, Gibraltar, Tangier, France, Italy, Greece, Russia, Turkey, Syria, Palestine, Egypt, Spain, and Bermuda. But like many travelers, it was Hawaii to which he wanted to return. He got back there, briefly, only once, in 1895 – but wrote about it again in his last travel book, Following the Equator (1897). “Those islands which to me were Paradise,” he said, “a Paradise which I had been longing all those years to see again.” That dream – and so many others, of Twain’s – began here, in 1866, with this letter, on a slow horse, going up a mountain…and is shared, still, by millions of wintering tourists. 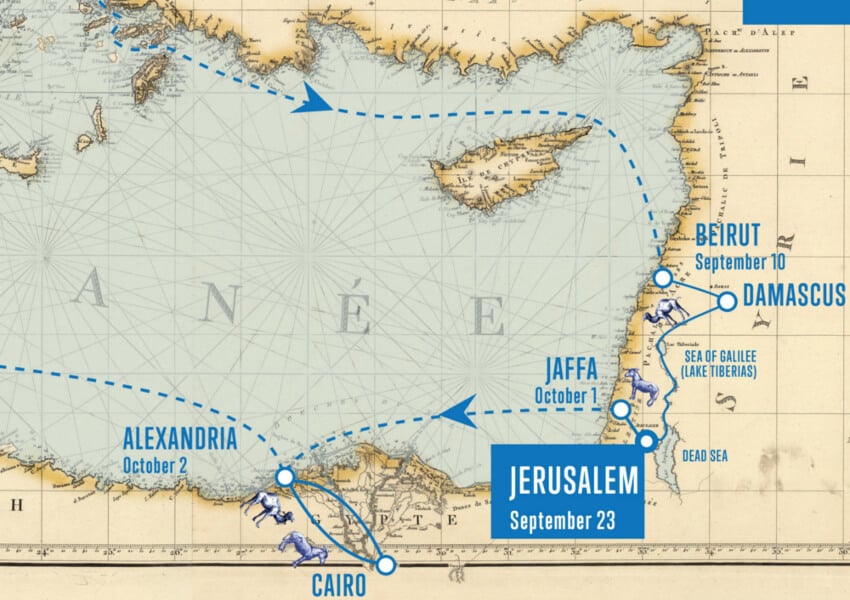