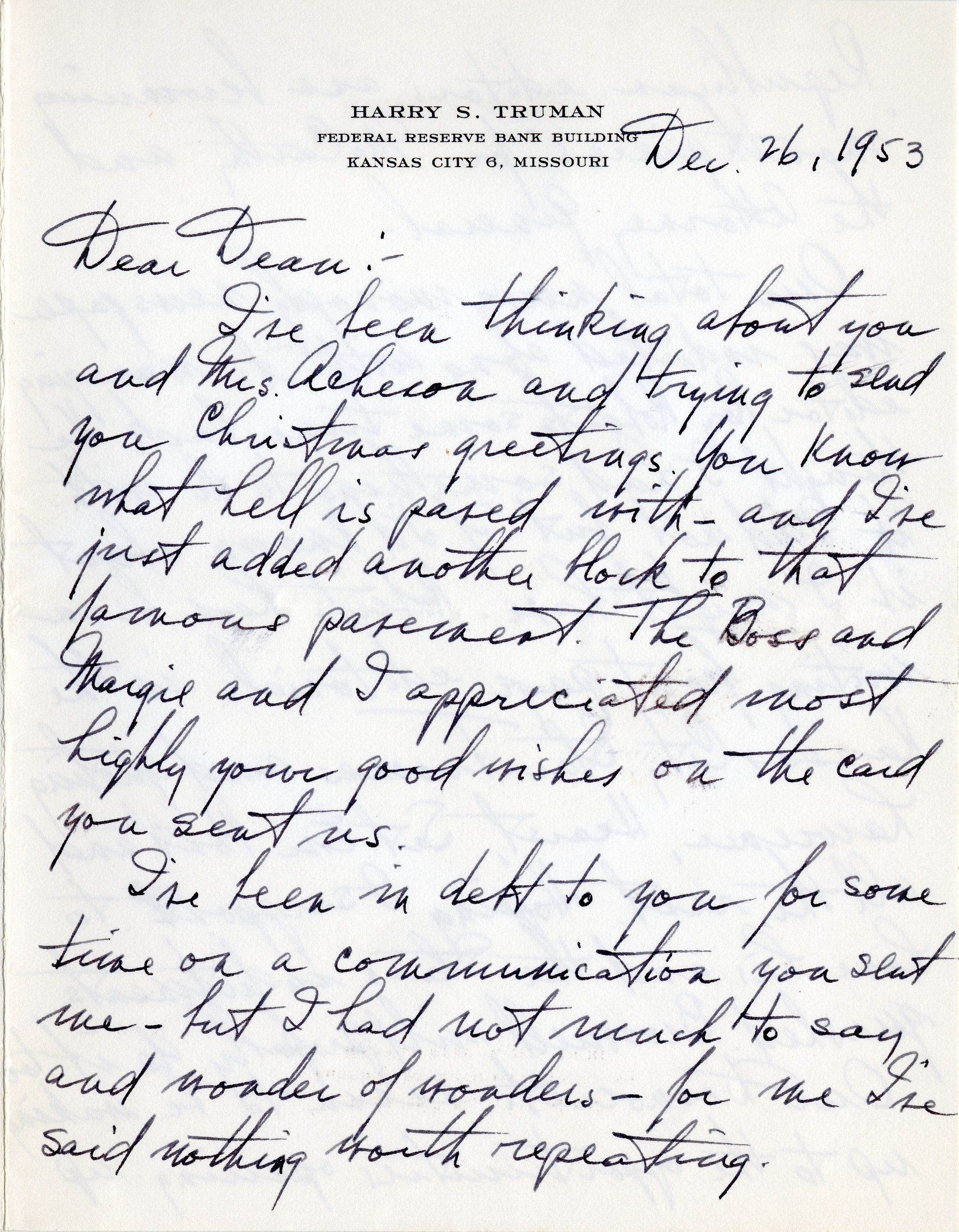 One of Harry Truman’s first jobs was with the Kansas City Star. For two weeks in August 1902, the eighteen-year-old future president wrapped newspapers in the Star’s mailroom at the northeast corner of 11th Street and Grand Avenue in Kansas City. He made $7.00 the first week, $5.40 the second. Decades later, despite his earlier employment, Truman continually feuded with the Star and its managing editor and president, Roy Roberts. In 1950, Truman wrote a letter to Roberts, which he never mailed, that said, “If the Star is at all mentioned in history, it will be because the President of the U.S. worked there for a few weeks …”

The bad blood between Truman and Roberts had everything to do with partisan politics. Roberts was a staunch Republican, and the Star often ran editorials critical of Truman and the Democratic Party. Roberts was also a close friend of Dwight Eisenhower. Only two weeks before Truman left office in January 1953, the Star was indicted by a federal grand jury for monopolistic advertising practices. The government sought to have the Star divest itself of radio and television stations and change its advertising practices. Roberts, who was named a defendant in the government’s suit, called the indictment an “inquisition.” Truman steadfastly claimed that he had nothing to do with it, and once told well-known columnist Drew Pearson, “Roy Roberts blames me for indicting him, but the fact is I didn’t know about it until well after the Justice Department had begun the case.”

In this letter to Acheson, Truman sticks to his story about the Star, which he mockingly calls “Our total news monopoly newspaper.” He does not hide his disdain for Roberts: “He thought I had something to do with it. I did not, but if I'd known about it I might have.” Well aware of the close relationship between Roberts and Eisenhower, Truman predicts that Roberts would convince Attorney General Herbert Brownell Jr. to try to quash the indictment. And Truman was right. Only days before the trial in 1955, a special prosecutor for Brownell tried to get the indictment dismissed. But the motion failed. The Star was eventually found guilty in one of the biggest antimonopoly suits ever brought against a newspaper, and forced to sell its television and radio stations and abandon combination advertising and subscription rates.

Truman’s issues with newspapers did not stop with the Star. He frequently bemoaned unfavorable news columns and editorials. In this case, Truman complains to Acheson that Republican papers across the country were coddling Eisenhower and serving as “mouthpieces” for Brownell and the notorious Joe McCarthy. He specifically cites conservative journalists Raymond Moley, columnist for Newsweek and later for the National Review, and David Lawrence, who started the U.S. News & World Report in 1948. Moley and Lawrence were both vocal critics of New Deal liberalism. The New York Herald-Tribune, Washington Star, and Saturday Evening Post were all right-leaning publications. Truman often looked to history and past presidents to make sense of his own time. He writes Acheson, “I've read the press on Washington, Jefferson, Adams, Jackson, Lincoln, Cleveland, Teddy R., Wilson and F.D.R. and there seems to me to be no parallel.  Maybe I'm somewhat prejudiced!”

Truman penned this letter at the height of McCarthyism, which he calls “this great period of hysteria,” and is stunned that Eisenhower and conservative newspapers criticized the Truman administration but not the divisive demagogue from Wisconsin. Truman had openly denounced McCarthy for three years, and according to a January 1954 Gallop poll released shortly after this letter, 50% of the American public approved of McCarthy and only 29% did not. No wonder he was miffed by Eisenhower’s do-nothing attitude. In Ike’s defense, the decorated war hero believed that ignoring McCarthy was better than joining him in the gutter. In April 1953, Eisenhower confided to his diary of McCarthy: “Nothing will be so effective in combating his particular kind of trouble-making as to ignore him. This he cannot stand.” Eisenhower refused to meet McCarthy in the White House, and also declined to attend McCarthy’s wedding in September 1953 and did not even send a gift. In 1954, Eisenhower more assertively went after McCarthy, which contributed to the senator’s political and personal demise. There was that, at least, one thing that Truman and Eisenhower agreed on.

I've been thinking about you and Mrs. Acheson and trying to send you Christmas greetings.  You know what hell is paved with - and I've just added another block to that famous pavement.  The Boss and Margie and I appreciated most highly your good wishes on the card you sent us.

I've been in debt to you for some time on a communication you sent me - but I had not much to say and wonder of wonders - for me I've said nothing worth repeating.

Conditions are such that Ike can do no wrong and I can do no right.  If it weren't tragic it would be the best comedy in history.  Ray Moley, Kate Lawrence, the Herald-Tribute, the Star in Washington, the Sat Eve Post and the Baltimore Sun have had some of the worst editorials and the funnyest [sic] editorials I've ever seen.  I've read the press on Washington, Jefferson, Adams, Jackson, Lincoln, Cleveland, Teddy R., Wilson and F.D.R. and there seems to me to be no parallel.  Maybe I'm somewhat prejudiced!

Dulles, Wilson, Humphrey et al seem to be helping to make confusion thrice compounded and a lot of

Republican editors are becoming "mouthpieces" for McCarthy and the Attorney General.

Our total news monopoly newspaper was indicted along with its managing editor Roy Roberts some time back.  He thought I had something to do with it.  I did not but if I'd known about it I might have.  Roberts has been writing front page editorials in the Kansas City Star-Times and quoting Lawrence, Hearst, Sat Eve Post and all the rest.  Hoping I suppose[text is crossed out] to have his and the Star's indictments quashed.  Brownell will probably do it too. 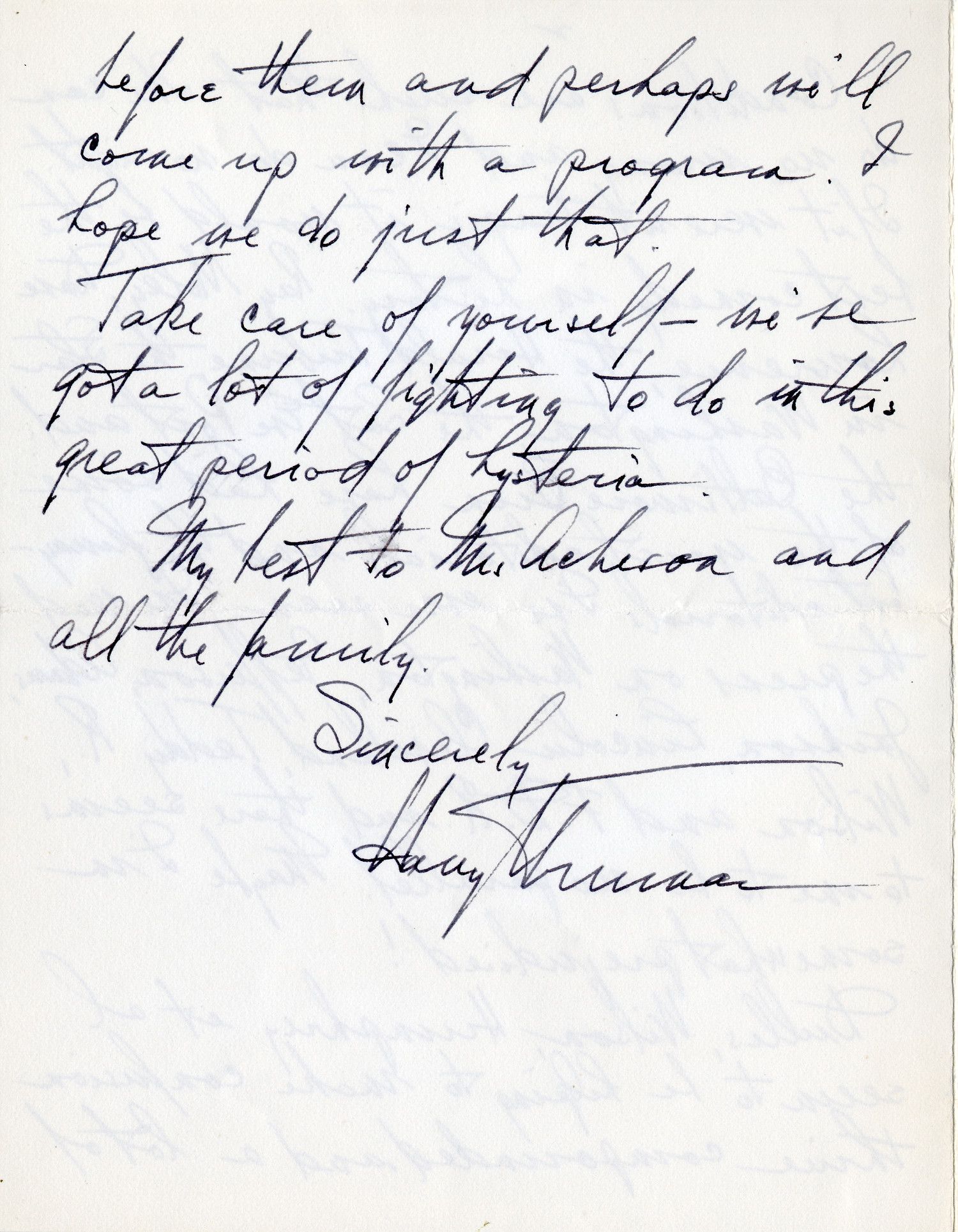 before them and perhaps will come up with a program.  I hope we do just that.

Take care of yourself - we've got a lot of fighting to do in this great period of hysteria.

My best to Mrs [sic] Acheson and all the family.