Harry Truman on Margaret, His Memoirs, and "Buck Passing" 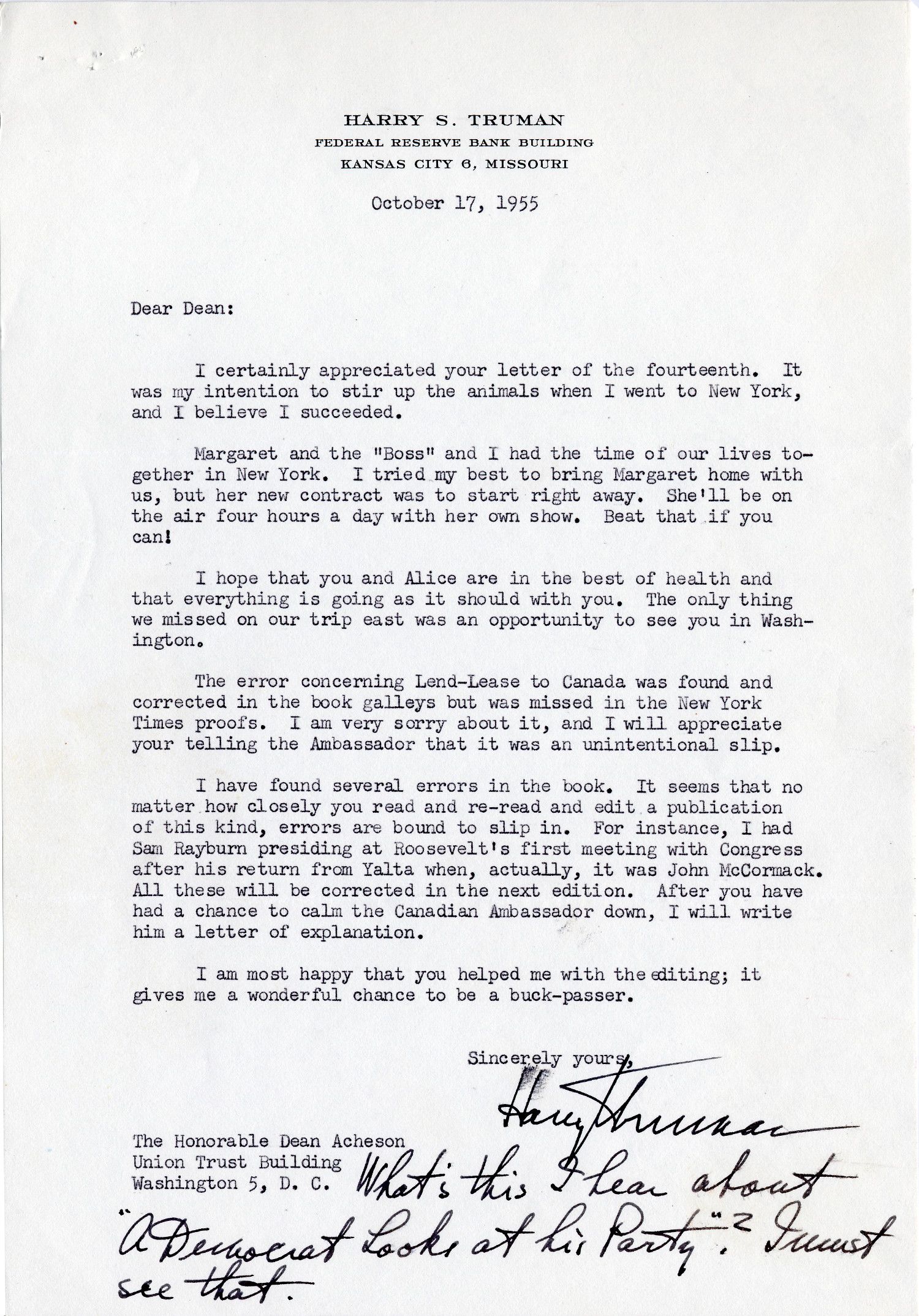 Harry Truman was a proud Missourian, but he also loved New York. He often campaigned there, either for himself in 1948 or for other Democratic candidates. According to one of his aides, Truman was the first person to use the phrase, “I love New York,” while campaigning in the Empire State. New Yorkers seemed to love Truman back. In the 1948 presidential election, Truman almost carried the state over New York’s Republican Governor Thomas Dewey, losing by less than 1% of the vote.

New York figures prominently in Truman’s letter to Acheson. Ten days earlier, Truman shook up the national political scene with a surprising speech at New York’s Democratic Committee Candidate Rally in Albany, NY. He threw his support behind New York’s Democratic Governor Averell Harriman for president and distanced himself from the 1952 Democratic candidate, Adlai Stevenson. Truman called Harriman a “genius” who “had all of the qualifications for the presidency,” which Truman told the crowd was a “great white jail.” Although he did not formally endorse Harriman, he said, “if I were a citizen of New York, I know who I’d be for.” Truman writes Acheson that he wanted to “stir up the animals,” and he did just that. Dwight Eisenhower had just suffered a heart attack in September 1955, so Democrats believed they had a better shot to win back the White House.

During their trip to New York, Harry and his wife Bess, whom he often called “the Boss,” visited their only child, Margaret. Margaret had moved to New York City shortly after her father left the White House in January 1953. She was an accomplished vocalist, having appeared in concert halls, Ed Sullivan’s “Toast of the Town” in 1950, and even the cover of Time magazine in February 1951. She interviewed her parents on Edward Murrow’s “Person to Person” in May 1955, and later that year signed a contract to co-host NBC Radio’s “Weekday” with Mike Wallace, who later became one of the original correspondents for CBS’s “60 Minutes.” Truman proudly tells Acheson, “She'll be on the air four hours a day with her own show. Beat that if you can!”

New York’s paper of record, the NY Times, had published installments of Truman’s error-plagued memoirs. In this letter, Truman references his erroneous claim that Canada received American aid during WWII through the Lend-Lease program. Canada’s ambassador at the time, Arnold Heeney, had called and written Acheson to complain about the misstatement. Truman often lamented the factual mistakes of historians and journalists. In this case, Truman was at fault and acknowledges how easy it is to make mistakes as a writer. He thanks Acheson for all of his editorial help and jokes, “it gives me a wonderful chance to be a buck-passer.” Acheson released his own book in late 1955, called A Democrat Looks at his Party, which Truman references in a handwritten postscript at the close of his letter. The Truman memoirs and Acheson’s book were both published in New York, by Doubleday and Harpers, respectively.

I certainly appreciated your letter of the fourteenth.  It was my intention to stir up the animals when I went to New York, and I believe I succeeded.

Margaret and the "Boss" and I had the time of our lives together in New York.  I tried my best to bring Margaret home with us, but her new contract was to start right away.  She'll be on the air four hours a day with her own show.  Beat that if you can!

I hope that you and Alice are in the best of health and that everything is going as it should with you.  The only thing we missed on our trip east was an opportunity to see you in Washington.

The error concerning Lend-Lease to Canada was found and corrected in the book galleys but was missed in the New York Times proofs.  I am very sorry about it, and I will appreciate your telling the Ambassador that it was an unintentional slip.

I have found several errors in the book.  It seems that no matter how closely you read and re-read and edit a publication of this kind, errors are bound to slip in.  For instance, I had Sam Rayburn presiding at Roosevelt's first meeting with Congress after his return from Yalta when, actually, it was John McCormack.  All these will be corrected in the next edition.  After you have had a chance to calm the Canadian Ambassador down, I will write him a letter of explanation.

I am most happy that you helped me with the editing; it gives me a wonderful chance to be a buck-passer.