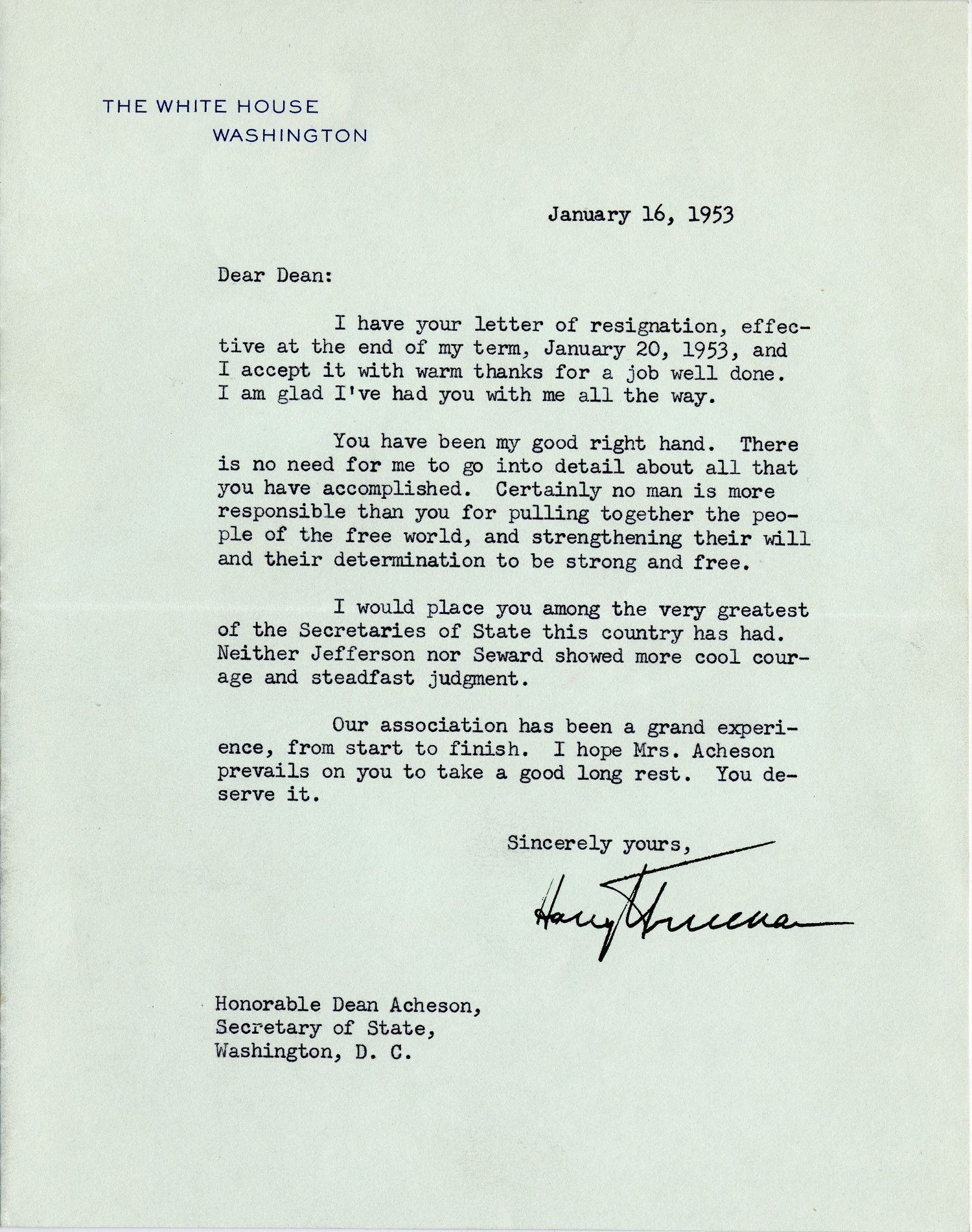 Harry Truman and Dean Acheson were an unlikely pair. Truman was a faithful Baptist and the son of a Missouri farmer; Acheson was the son of an Episcopal bishop from Connecticut. Truman never graduated college; Acheson graduated from Yale and completed his law degree at Harvard. Truman owed his political advancement to Democratic Party boss, Tom Pendergast of Kansas City; Acheson was a protégé of Supreme Court Justice Felix Frankfurter and law clerk for Louis Brandeis. Truman drank Bourbon; Acheson preferred martinis.

Nevertheless, the two men developed a close working relationship and became the principal architects of U.S. foreign policy during the early years of the Cold War. Truman first appointed Acheson as his Under Secretary of State in 1945, and then Secretary of State in 1949. Together, they convinced the American people to abandon traditional isolationism in favor of an internationalist agenda that aimed to contain communism. The buck stopped with Truman, but Acheson left a deep imprint on U.S. foreign policy. He advanced the domino theory, played a prominent role in developing the Truman Doctrine and the Marshall Plan, and promoted the formation of NATO. After North Korea invaded South Korea in 1950, Acheson secured UN support for a police action that became known as the Korean War.

In one of his last letters as president, Truman, who had declined to run for a second term in 1952, here warmly accepts the resignation of his “good right hand.” Acheson once observed that Truman was “free of the greatest vice in a leader, his ego never came between him and his job.” True to form, Truman humbly credits Acheson with the extraordinary foreign policy successes of his presidency. He writes, “Certainly no man is more responsible than you for pulling together the people of the free world, and strengthening their will and their determination to be strong and free.” A student of history, Truman places Acheson in the top tier of Secretaries of State, alongside Thomas Jefferson and William Seward, who served George Washington and Abraham Lincoln, respectively.

Truman’s letter can also be read as a rebuttal to Dwight Eisenhower’s charges that the Truman administration was soft on communism. The Eisenhower camp hammered Truman and Acheson in the runup to the 1952 election for allowing China to go communist in 1949 and for not ending the Korean War. Truman’s State Department, headed by Acheson, also had to withstand Republican Senator Joseph McCarthy’s accusations of communist infiltration. When Truman left office, only a few days after this letter, his approval rating had sunk to 31%.

Truman and Acheson forged a strong bond during their time in Washington and remained good friends as private citizens. They continued an extensive correspondence until Acheson’s death in 1971. Truman passed the following year. Several of their letters are represented in the Shapell Manuscript Collection.

I have your letter of resignation, effective at the end of my term, January 20, 1953, and I accept it with warm thanks for a job well done.  I am glad I've had you with me all the way.

You have been my good right hand.  There is no need for me to go into detail about all that you have accomplished.  Certainly no man is more responsible than you for pulling together the people of the free world, and strengthening their will and their determination to be strong and free.

I would place you among the very greatest of the Secretaries of State this country has had.  Neither Jefferson nor Seward showed more cool courage and steadfast judgment.

Our association has been a grand experience, from start to finish.  I hope Mrs. Acheson prevails on you to take a good long rest.  You deserve it.