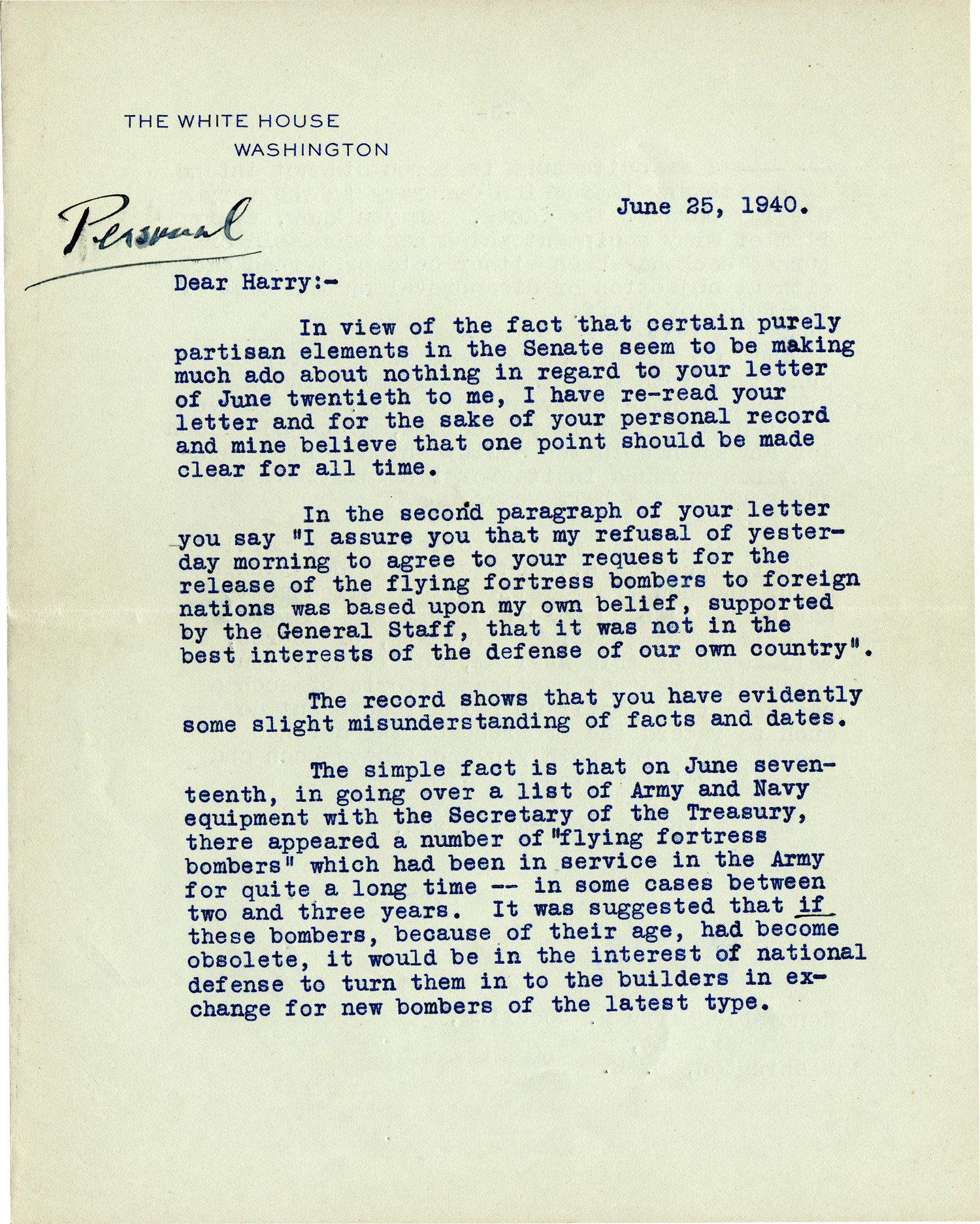 President Franklin Roosevelt’s decision in June 1940 to replace Secretary of War Harry Woodring resulted in blowback from the U.S. Congress, and especially the Senate, which Roosevelt refers to in this letter from June 25th, 1940. While a few legislators expressed concern about Woodring’s forced resignation – and he did have many friends in Congress – more often than not, legislators used Woodring’s plight to hammer away at the president.

Most Republicans despised Roosevelt. His New Deal stunk of socialism. His effort to pack the Supreme Court appeared totalitarian. He was poised for an unprecedented third term as president. His detractors often portrayed him as a king. And Republicans were notoriously isolationist – or at least noninterventionist – and certainly worried that Roosevelt would take the country to war. The firing of Woodring was a perfect opportunity for some legislators to go after Roosevelt.

Gerald Nye, a Republican senator from North Dakota and perhaps the most outspoken isolationist in the U.S. government, called for Woodring to testify before Congress about the contents of his letter. Nye insinuated that Woodring resigned because he refused to share with England a secret and sophisticated piece of technology – sophisticated for its time – that promised to deliver bombs with an accuracy beyond anything yet developed. Many feared it would fall into German hands. According to Nye, “that all valuable bomb sight, which every member of the Senate for months has been assured was being guarded with the utmost secrecy.”

Nye’s posturing drew a sharp rebuke from Alben Barkley, the liberal Democrat from Kentucky and future vice president of Harry Truman. Barkley told the Senate that he had actually phoned General Arnold, the head of the Air Corps of the U.S. Army, and Arnold “authorized me to say that at no time, in any conference or in any deliberation or during the consideration of secrets of the War Department or of the United States Army, was any consideration ever given to the revelation of any secret bomb sight on the bombers of the United States Army.” Barkley added his disgust that “Senators should speculate about some dereliction of duty that is intimated by those who do not happen to agree with the policy of the present administration.” Senator David Walsh (D-MA), like Barkley, tried to defend Roosevelt. He noted that the B-17s in question were considered quite old by the Navy – just like Roosevelt suggests in this letter.

Press reports only added fuel to the isolationist fire. Woodring gave the impression that he had been fired for protesting the weakening of U.S. defense forces. Arthur Vandenburg (R-MI), who at the time was a staunch noninterventionist and bitter critic of Roosevelt, wanted Woodring to testify as to whether or not the Associated Press quoted him correctly – that he opposed “stripping our defenses to aid the Allies.” Vandenburg changed his stance after Pearl Harbor and eventually became one of the loudest voices in favor of an internationalist – and eventually anticommunist – U.S. foreign policy. Senator Ernest Lundeen (R-MN), who was often accused of having pro-German sympathies, referenced press reports that Woodring “vigorously protested” Roosevelt’s decision to give “away our defenses,” and that Woodring “deserves great credit in sacrificing his position for his conviction.” Newspapers such as The Miami Herald ran stories about Nye’s accusation about the bomb sight. Rush Holt (D-WV), a conservative critic of the New Deal, referenced London newspapers that stated Churchill’s War Ministry had pressured FDR to get rid of Woodring. England, of course, desperately needed American help to prepare for the imminent Nazi attack. Some legislators even called for Woodring to testify to a joint congressional committee about the reasons why he was asked to resign.

The brouhaha about the secret resignation letter inspired Senator Joel Bennett Clark (D-MO) to submit a resolution that requested the White House release Woodring’s letter. Clark noted, “Ordinarily the whole correspondence in connection with the resignation of a Cabinet officer is given out from the White House as a matter of course.” The Clark resolution was referred to the Committee on Military Affairs. Roosevelt continued to resist calls to release the letter, and Woodring also refused to talk about the details. The letter remained private into 1941, at which point many people had forgotten about it.

In view of the fact that certain purely partisan elements in the Senate seem to be making much ado about nothing in regard to your letter of June twentieth to me, I have re-read your letter and for the sake of your personal record and mine believe that one point should be made clear for all time.

In the second paragraph of your letter you say "I assure you that my refusal of yesterday morning to agree to your request for the release of the flying fortress bombers to foreign nations was based upon my own belief, supported by the General Staff, that it was not in the best interests of the defense of our own country".

The record shows that you have evidently some slight misunderstanding of facts and dates.

The simple fact is that on June seventeenth, in going over a list of Army and Navy equipment with the Secretary of the Treasury, there appeared a number of "flying fortress bombers" which had been in service in the Army for quite a long time -- in some cases between two and three years.  It was suggested that if these bombers, because of their age, had become obsolete, it would be in the interest of national defense to turn them in to the builders in exchange for new bombers of the latest type. 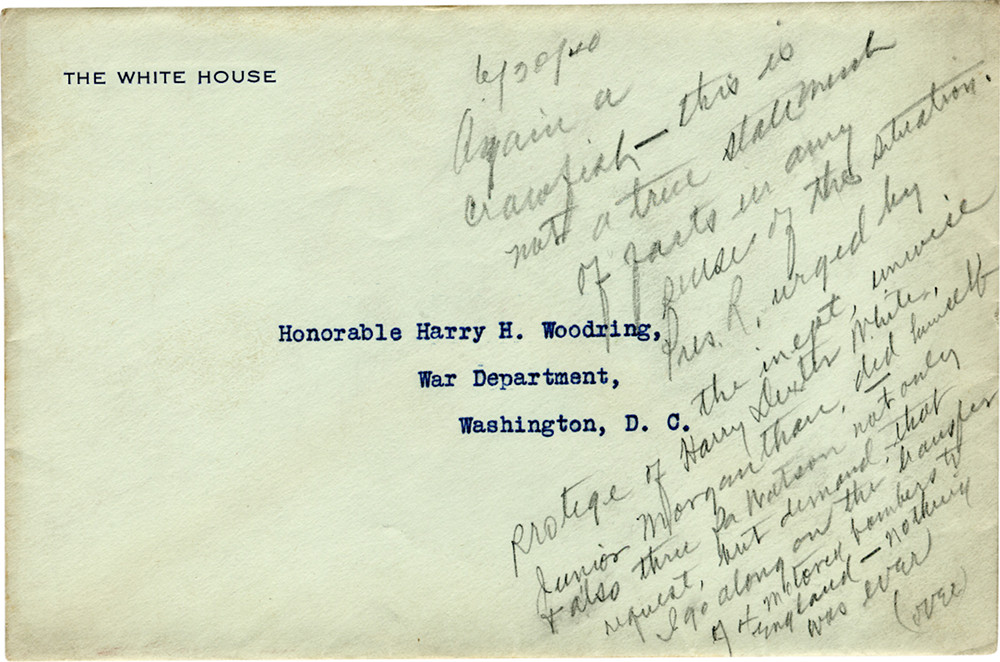 Again a crawfish -- this is not a true statement of facts in any sense of the situation.  Pres. R, urged by the inept, unwise protege of Harry Dexter White, Junior Morgenthau, did himself & also thru Pa Watson not only request, but demand, that I go along on the transfer of 4 motored bombers to England -- nothing was ever  (over) 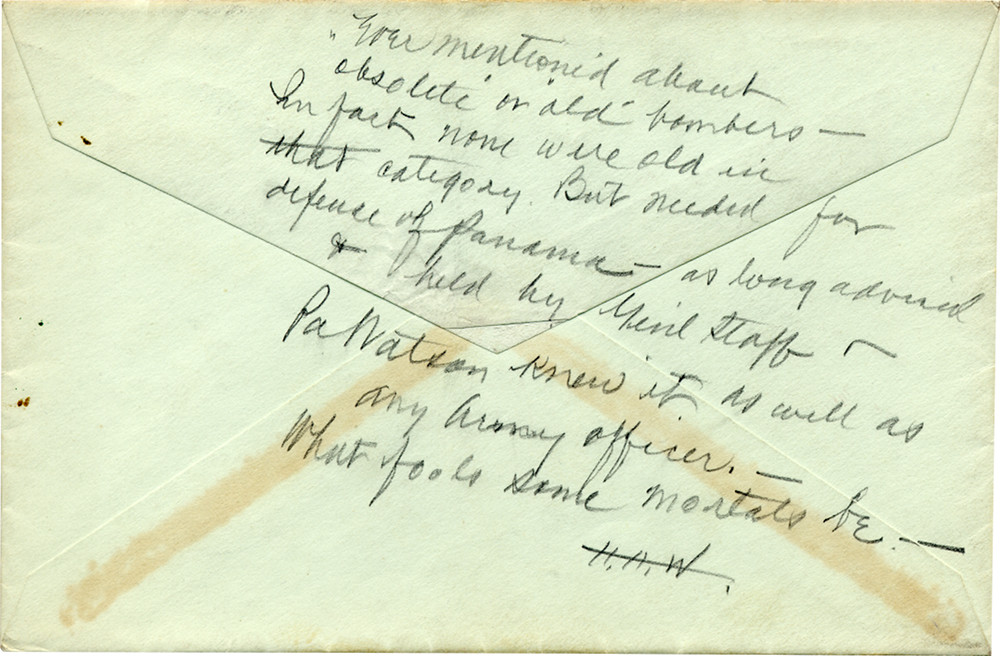 ever mentioned about "obsolete" or "old" bombers -- In fact none were old in that category.   But needed for defense of Panama -- as long advised & held by Gen'l Staff --

Pa Watson knew it as well as any Army officer. --