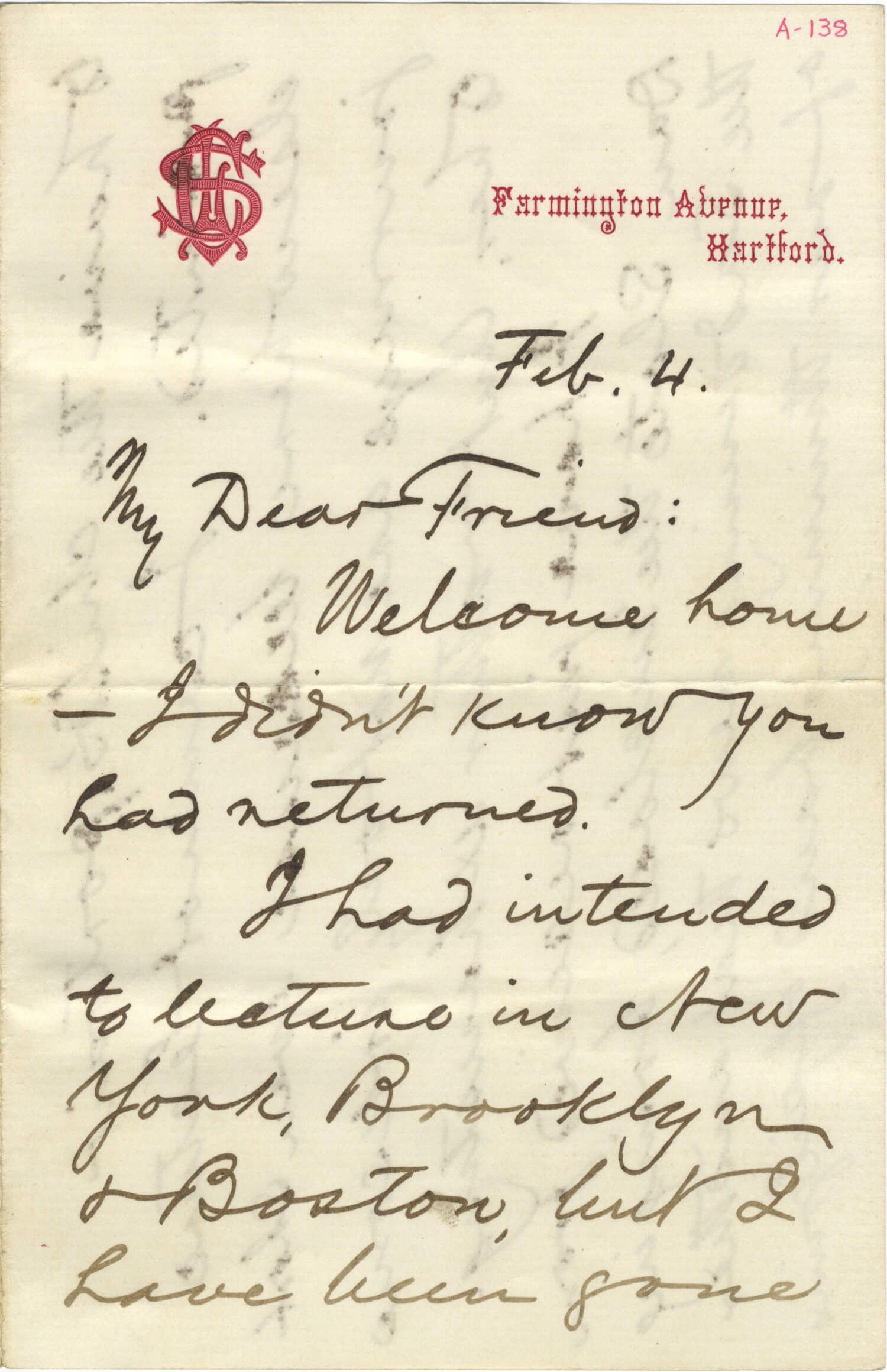 Taken very sick at 4AM. The last twenty-four hours we staid in Damascus I lay prostrate with a violent attack of cholera, or cholera morbus, and therefore had a good chance and a good excuse to lie there on that wide divan and take an honest rest. I had nothing to do but listen to the pattering of the fountains and take medicine and throw it up again. It was dangerous recreation, but it was pleasanter than traveling in Syria. I had plenty of snow from Mount Hermon, and as it would not stay on my stomach, there was nothing to interfere with my eating it - there was always room for more. I enjoyed myself very well. Syrian travel has its interesting features, like travel in any other part of the world, and yet to break your leg or have the cholera adds a welcome variety to it. - Mark Twain Notebooks, September 15, 1867

Of the 65 or so passengers cruising the Mediterranean aboard the Quaker City in the Summer and Fall of 1867, were four unmarried women - of whom the seventeen-year old Emma Beach was one; and so too, making the voyage, a knot of unmarried young men - of whom the 33 year-old Civil War fugitive, failed miner, hard-drinking journalist and provocateur Samuel L. Clemens, was another. Whether there was a flirtation between Miss Beach and Mr. Clemens, is conjecture: but what is fact, is that they became, and remained, good friends. This letter to "My Dear Friend" testifies to that friendship, and their shared adventure traveling to the Holy Land  - which, when written up by Clemens as The Innocents Abroad in 1869, made his pseudonym, Mark Twain, famous.

Clemens begins with a review of his travel plans, in which Emma's home in Brooklyn might have featured, had his intention to lecture in New York and Brooklyn held sway. But his wife (then pregnant with their second daughter) was "not cheerful" when he was away, he reports, and so he would not be venturing further from home than Boston. The chief news of the day, however, is not his, but comes rather from their old Quaker City companion Dan Slote - - who has apparently enclosed a letter from yet another Quaker City cohort, Col. William R. Denny, to the effect that yet a third member of their party, the homeopathic doctor George Bright Birch, had died in Allahabad, India. just a few months before. This information he conveys with an echo of a favorite verse, from Exodus 2:22 (“I have been a stranger in a strange land”):

I have just received from Dan Slote the enclosed, bringing the saddening news that another of our thinning band of pilgrims has gone the way of all flesh while in a far land among a strange people. I have always held Dr. Birch in grateful memory because he stood by me so stanchly when I was dangerously ill in Damascus.

The reference to Clemens' illness, about which he wrote with such bravado in his Notebook just seven years before, evinces a striking new maturity: grateful for kindness, serious about illness, and already seeing in "our thinning band of pilgrims", the inevitability of loss.  Clemens - now a solicitous husband, the father of a dead son and a live daughter - was, it seems, beginning to hint at the tragic sensibility which would mark, and blight, his last years. 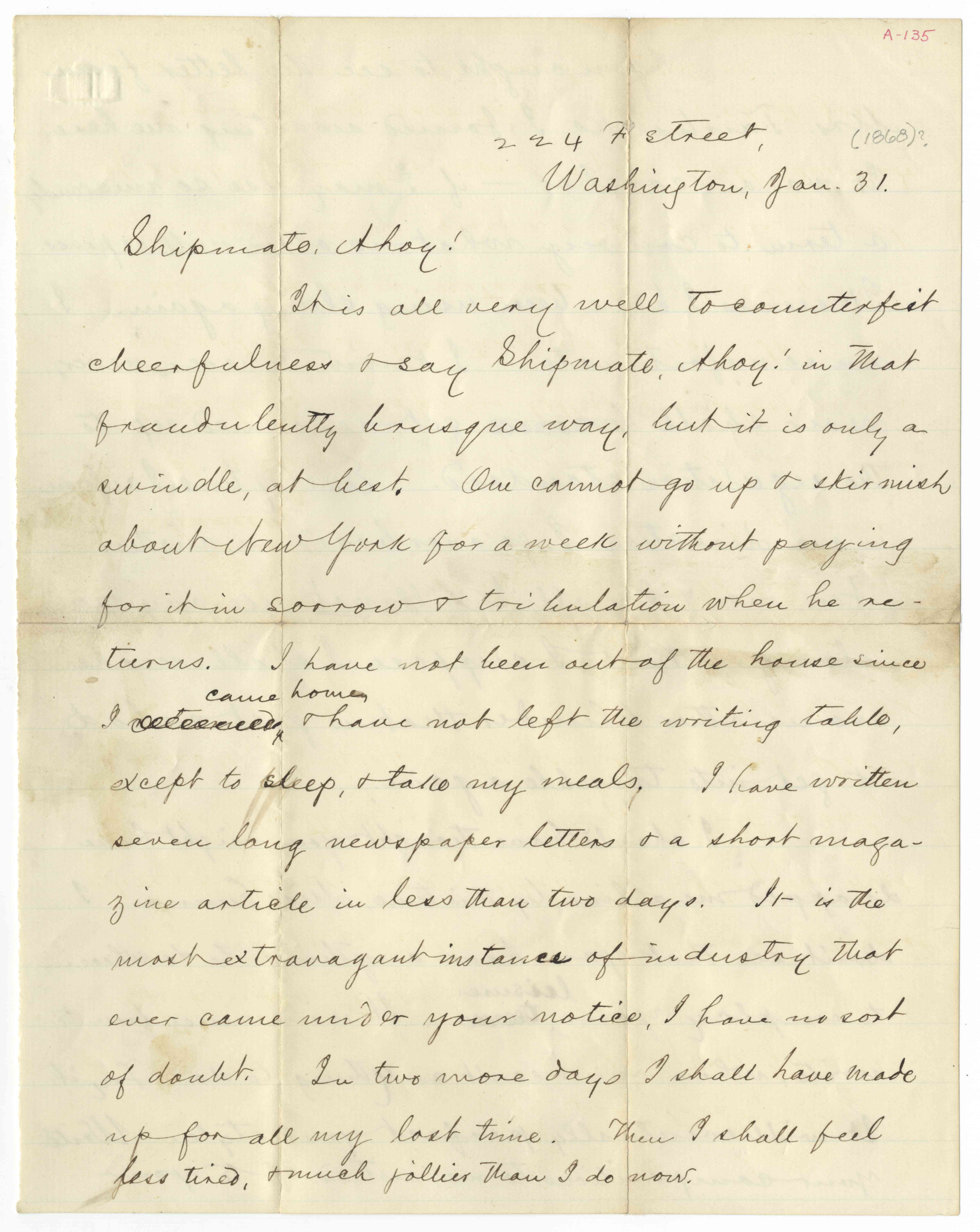 Twain Asks His Young "Quaker City" Shipmate & Favorite, Emma Beach, For Help With His Articles About the Voyage 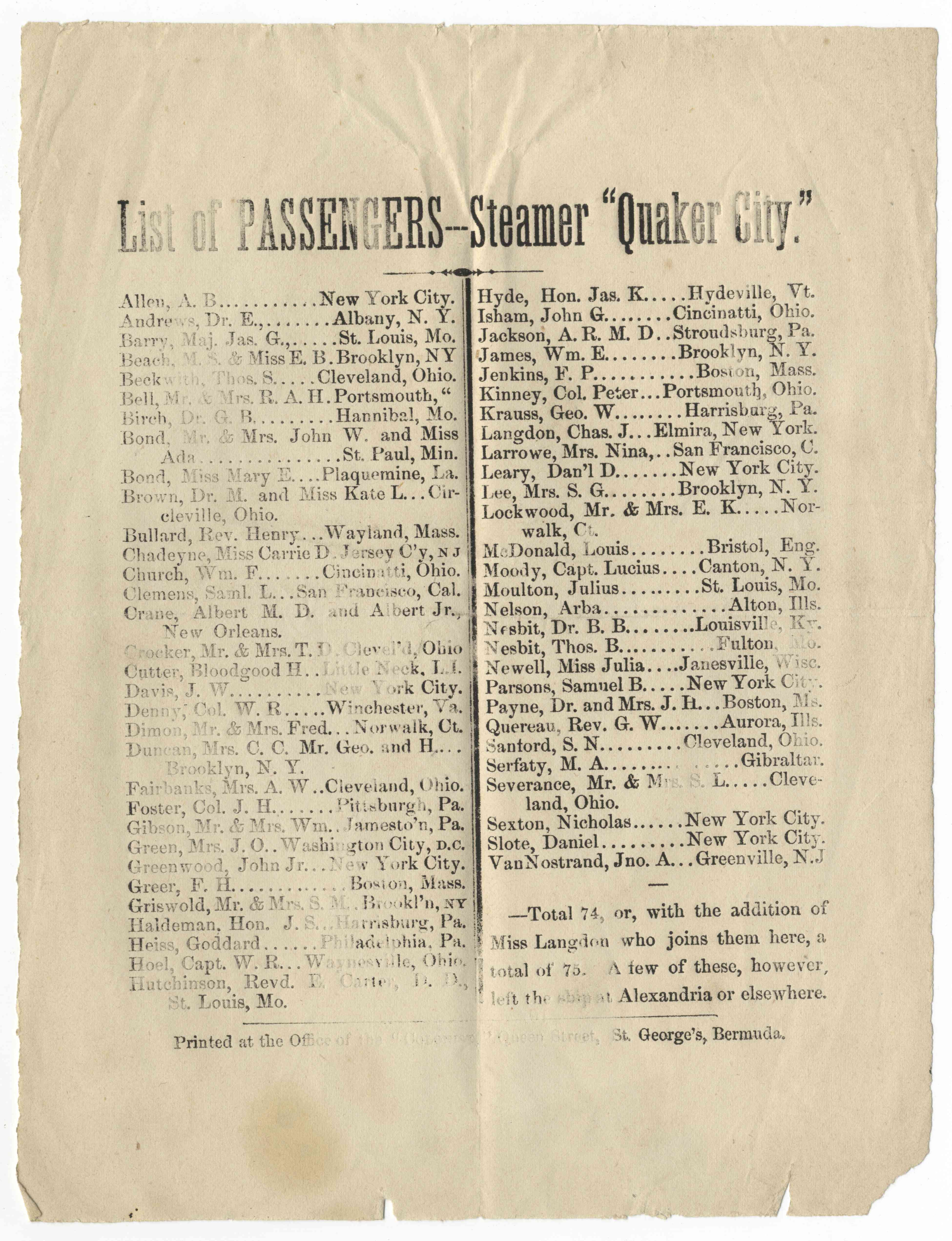 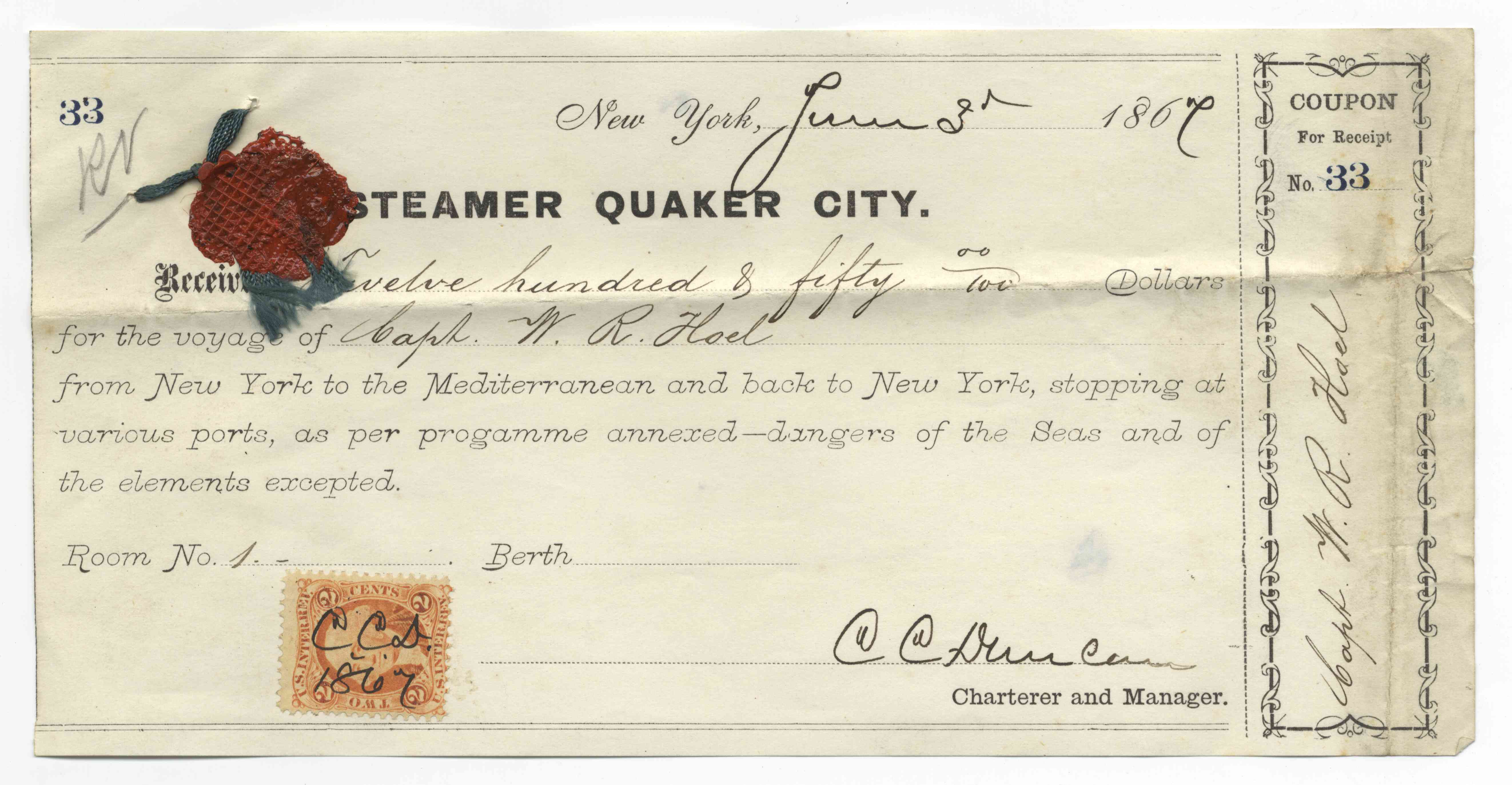 Welcome home — I didn’t know you had returned.

I had intended to lecture in , Brooklyn & Boston, but I have been gone 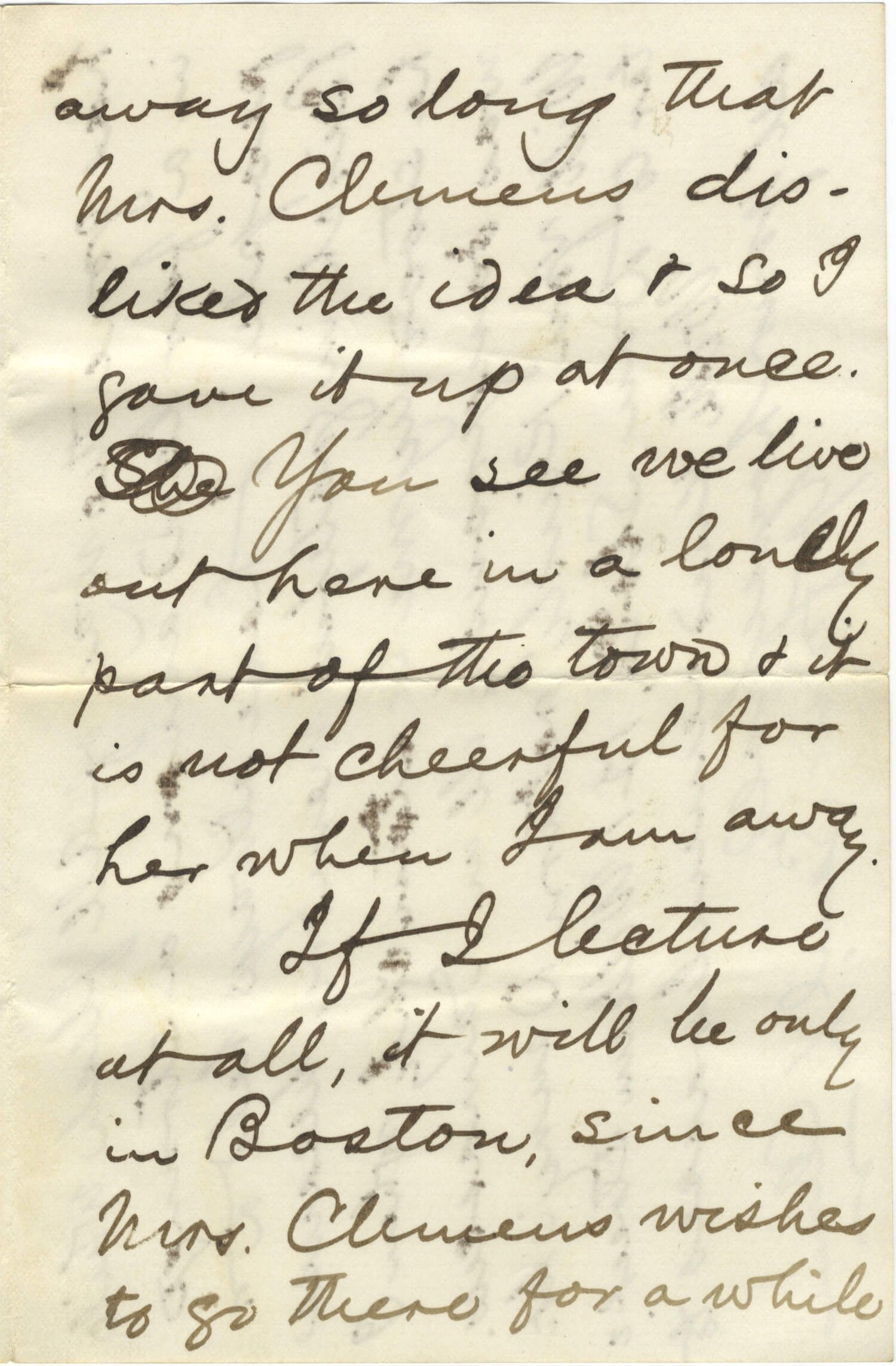 away so long that Mrs. Clemens disliked the idea & so I gave it up at once.  [text is crossed out] You see we live out here in a lonely part of the town & it is not cheerful for her when I am away.
If I lecture at all, it will be only in Boston, since Mrs. Clemens wishes to go there for a while 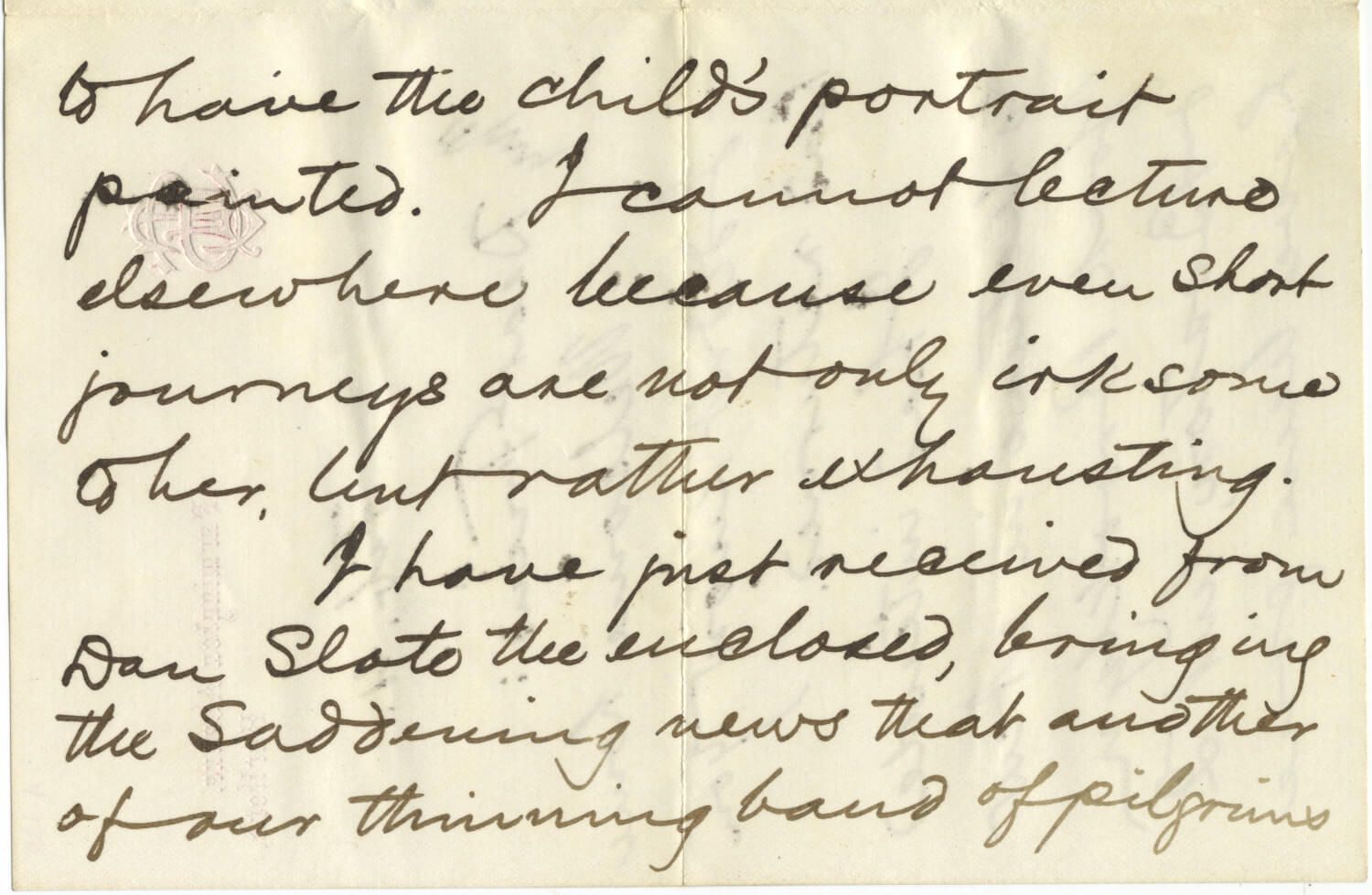 to have the child’s portrait painted.  I cannot lecture elsewhere because even short journeys are not only irksome to her, but rather exhausting.
I have just received from Dan Slote the enclosed, bringing the saddening news that another of our thinning band of pilgrims 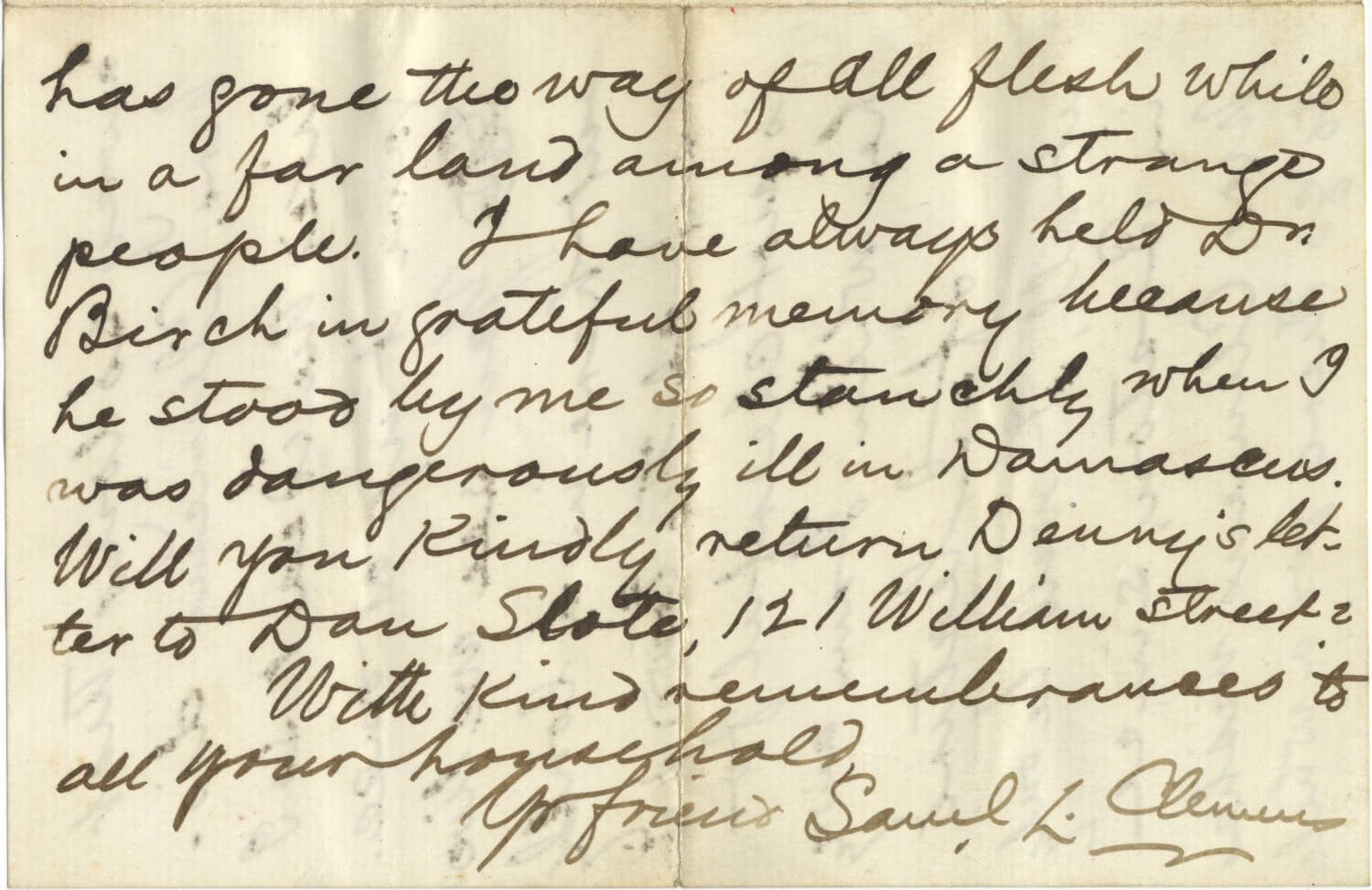 has gone the way of all flesh while in a far land among a strange people.  I have always held Dr. Birch in grateful memory because he stood by me so stanchly when I was dangerously ill in .  Will you kindly return Denny’s letter to Dan Slote, ?

With kind remembrances to all your household