"Honest Abe" Lincoln, Annoyed About an Unpaid Bill, Orders It Paid – On the Day He Effectively Declares War 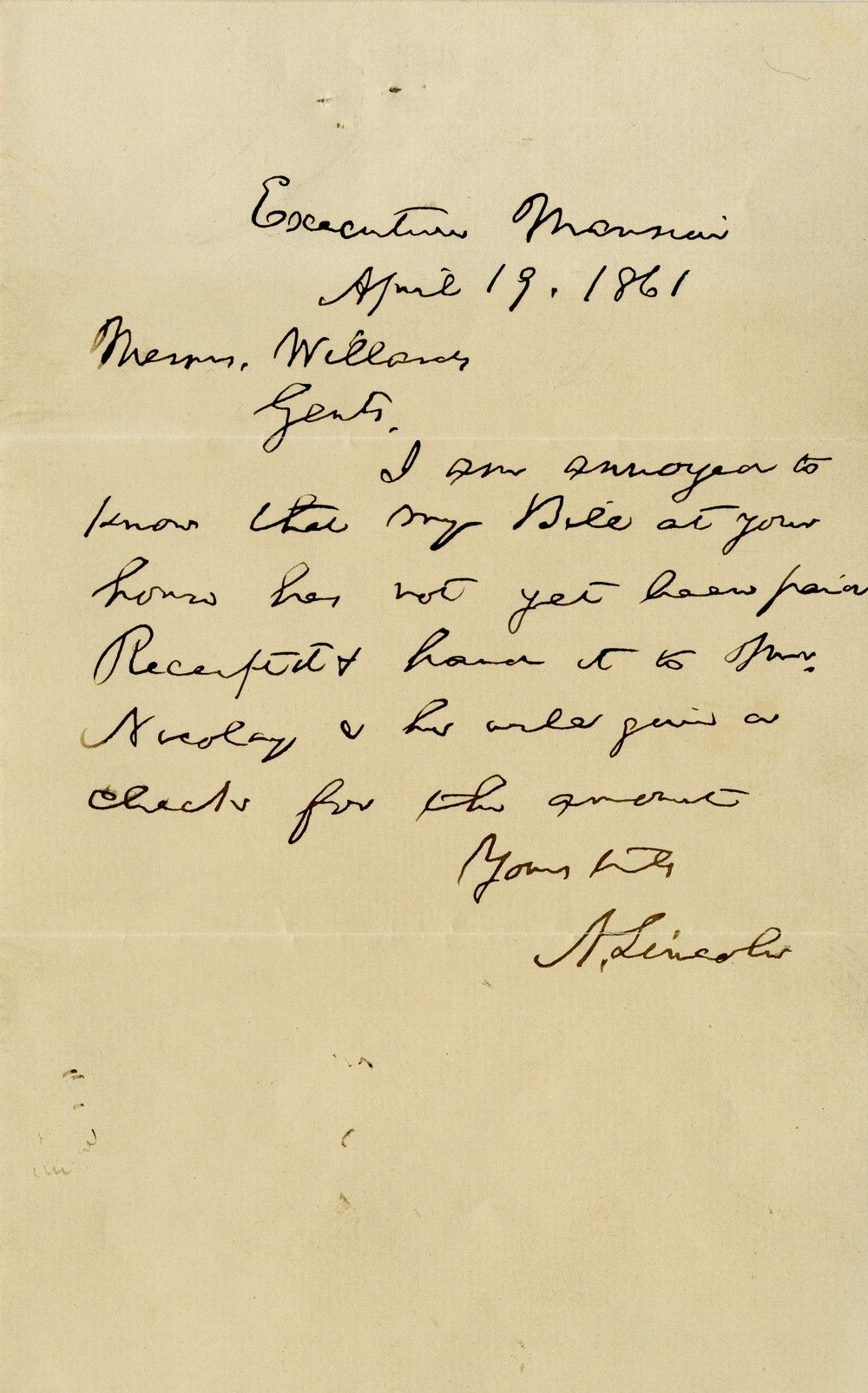 On April 19, 1861, President Lincoln, some six weeks in office and a mere five days after Fort Sumter’s fall, acted unequivocally to turn the insurrection into a war. He did this simply, by proclaiming a blockade of the South. This was not a municipal blockade, or a paper blockade, or a closing of ports – but an actual war blockade notified to foreign nations. And, as a declared blockade was (and is) a recognition of War, not only were Secessionists immediately deemed belligerent, but all the war powers of the Commander in Chief fell, immediately, to Lincoln. On April 19th, too, Massachusetts troops traveling through Baltimore were attacked by an angry mob and it looked, even, as if the capitol might be attacked. It was typical of Lincoln, then, with the cataclysms of war all but at his doorstep, to write the letter here. It is about a small matter, a hotel bill from his stay before the Inauguration, and that it has not yet been paid, cannot stand.

I am annoyed to know that my Bill at your house has not yet been paid. Receipt it & hand it to the Mr. Nicolay & he will give a check for the amount.

Secretary Nicolay duly went to Willard’s Hotel, paid the $773.75 bill for the Lincoln’s February 23 to March 4, 1861 stay there, and brought back the receipt.

War or no war, Lincoln’s honesty was absolute – as this letter has come to famously attest.

I am annoyed to know that my Bill at your house has not yet been paid  Receipt it  & hand it to Mr. Nicolay & he will give a check for the amount 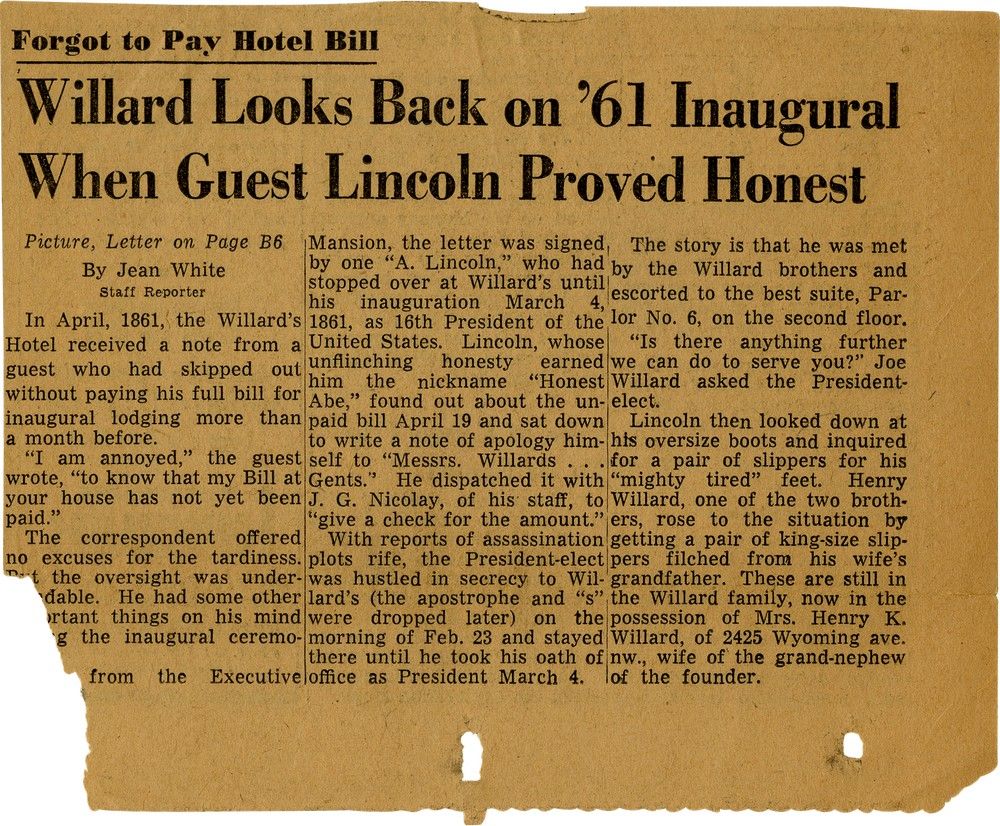 Picture, Letter on Page B6
By Jean White
Staff Reporter

In April, 1861, the Willard’s Hotel received a note from a guest who had skipped out without paying his full bill for inaugural lodging more than
a month before.
“I am annoyed,” the guest wrote, “to know that my Bill at your house has not yet been paid.”
The correspondent offered no excuses for the tardiness. [But] the oversight was under-[…]dable. He had some other [impo]rtant things on his mind
[durin]g the inaugural ceremo-[ny].
[…] from the Executive Mansion, the letter was signed by one “A. Lincoln,” who had stopped over at Willard’s until his inauguration March 4, 1861, as 16th President of the United States. Lincoln, whose unflinching honesty earned him the nickname “Honest Abe,” found out about the unpaid bill April 19 and sat down to write a note of apology himself to “Messrs. Willards . . . [sic] Gents.” He dispatched it with J. G. Nicolay, of his staff, to
“give a check for the amount.”
With reports of assassination plots rife, the President-elect was hustled in secrecy to Willard’s (the apostrophe and “s” were dropped later) on the morning of Feb. 23 and stayed there until he took his oath of office as President March 4.
The story is that he was met by the Willard brothers and escorted to the best suite, Parlor No. 6, on the second floor.
“Is there anything further we can do to serve you?” Joe Willard asked the President-elect.
Lincoln then looked down at his oversize boots and inquired for a pair of slippers for his “mighty tired” feet. Henry Willard, one of the two brothers, rose to the situation by getting a pair of king-size slippers filched from his wife’s grandfather. These are still in the Willard family, now in the possession of Mrs. Henry K. Willard, of 2425 Wyoming ave. [sic] nw., [sic] wife of the grand-nephew of the founder. 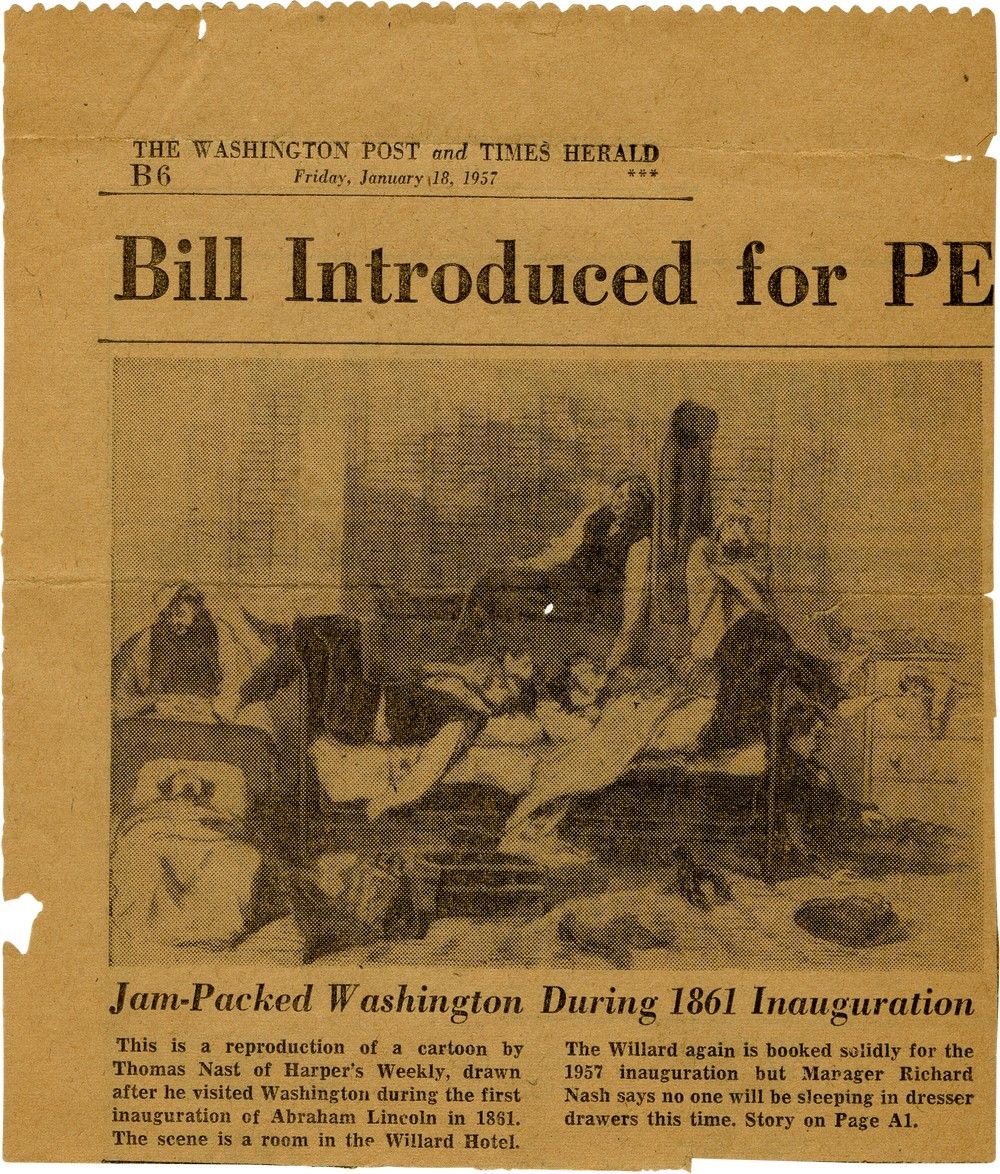 This is a reproduction of a cartoon by Thomas Nast of Harper’s Weekly, drawn after he visited Washington during the first inauguration of Abraham Lincoln in 1861.The scene is a room in the Willard Hotel.

The Willard again is booked solidly for the 1957 inauguration but Manager Richard Nash says no one will be sleeping in dresser drawers this time. Story on Page A1. 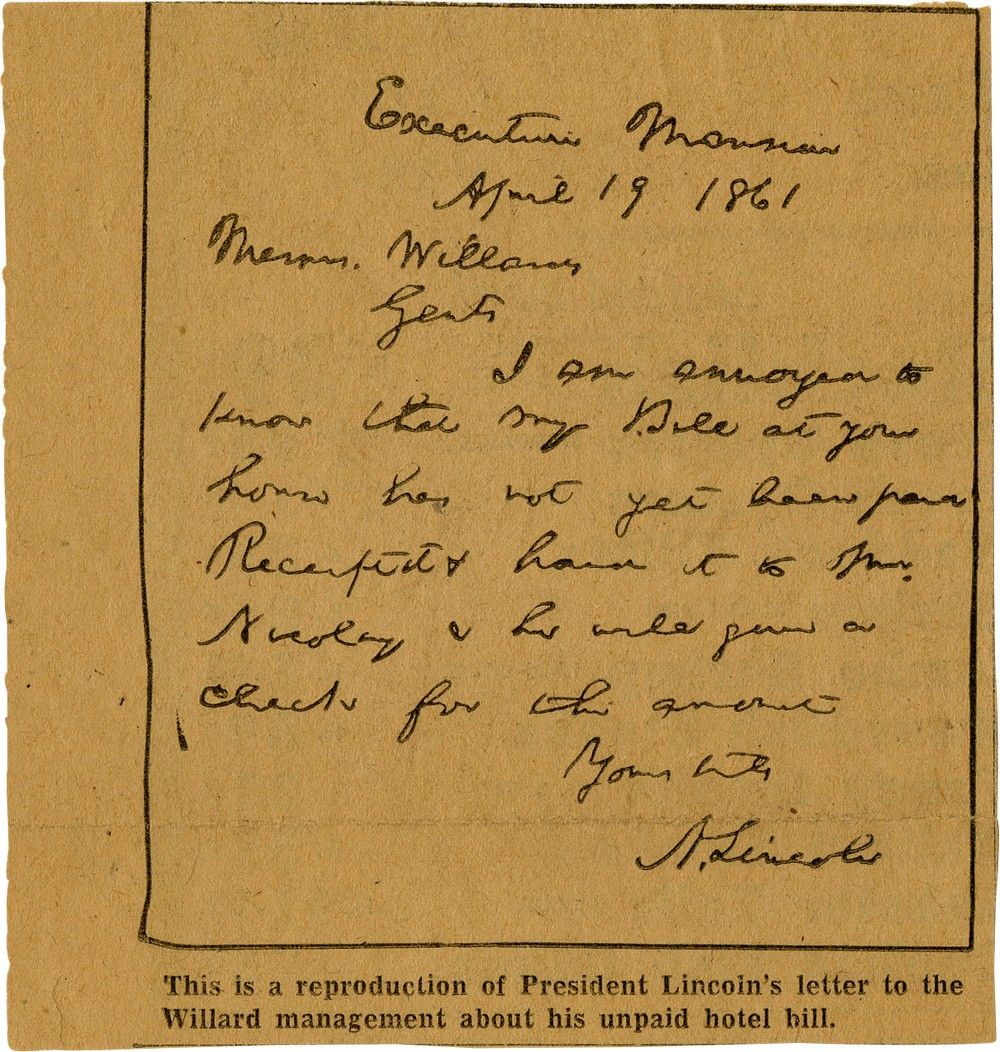 I am annoyed to know that my Bill at your house has not yet been paid. Receipt it & hand it to Mr. Nicolay & he will give a check for the amount

Yours truly
A. LINCOLN


This is a reproduction of President Lincoln’s letter to the
Willard management about his unpaid hotel bill.