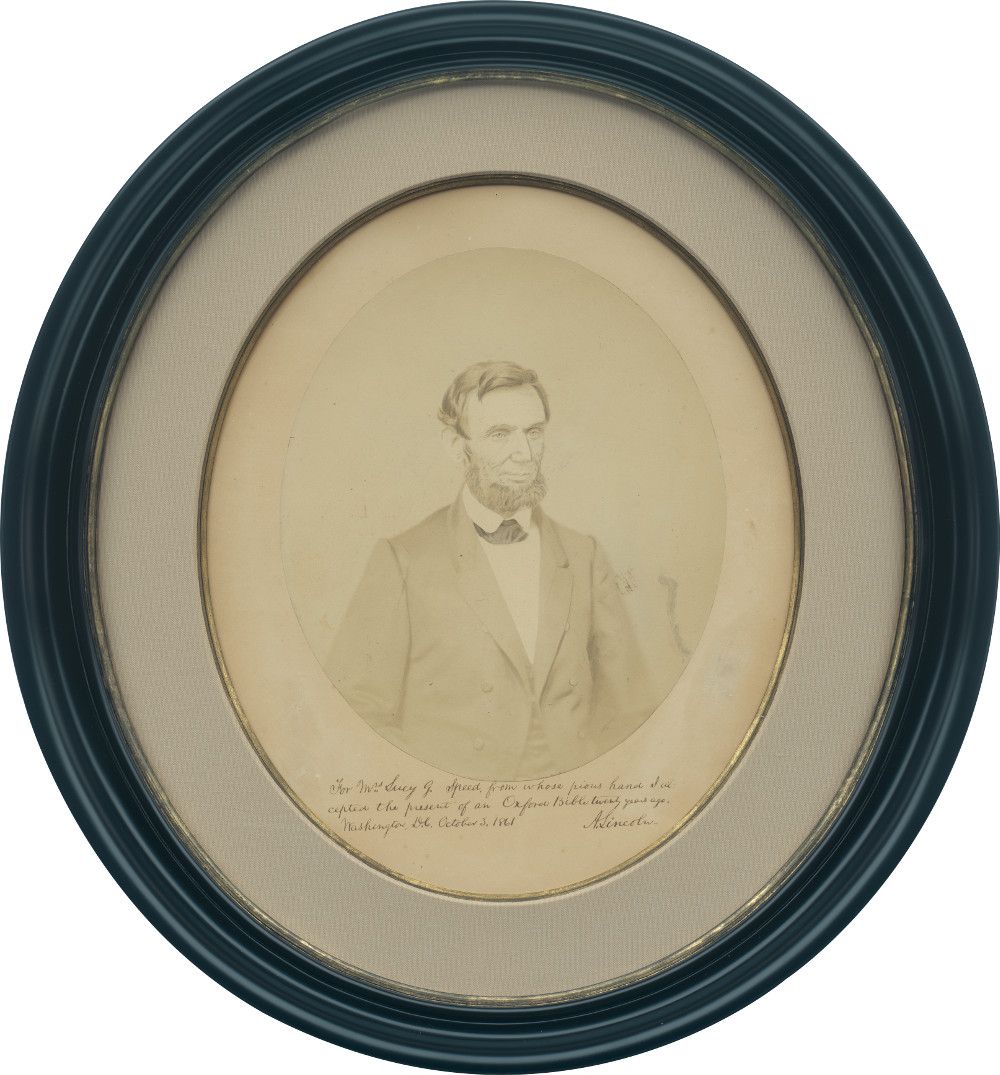 "Tell your mother that I have not got her 'present' with me; but that I intend to read it regularly when I return home. I doubt not that it is really, as she says, the best cure for the 'Blues' could one but take it according to the truth." - Abraham Lincoln, from a letter to Mary Speed, Lexington, KY, September 27, 1841.

In 1841, a young lawyer, despairing over a broken engagement, paid a month-long visit to the family of his best friend in a neighboring state. There, his friend's mother, herself inclined to melancholy, made a present of a book to him. It was a Bible, and she advised him to read it. Adopt its precepts, she said, pray for its promises; help, she assured him, would come. Her gesture made a great impression on the morose young man; he never forgot it. So much so, that twenty years later, when he had grown middle-aged, he transformed his personal discontent into a quest for universal justice, and indeed, married the woman who had earlier broken his heart; even then, Abraham Lincoln, President of the United States, recalled Lucy Speed's inspiring kindness. Making her a gift of a photo of himself, he recalled the occasion. "For Mrs. Lucy G. Speed," he wrote, "from whose pious hand I accepted the present of an Oxford Bible twenty years ago." He had never written and would never again write, a longer or more personal inscription on any photograph. Yet that is not the importance of this extraordinary Signed Photograph.

What makes the twenty-seven words of Lincoln's inscription so significant is its rare allusion to faith - and as such, a distinct marker in the evolution of his own. What Lincoln believed, and when he believed it, is a subject long steeped in scholarly speculation. Generally agreed, is that Lincoln left the Calvinist sect of his childhood as soon as possible; was thought, in New Salem, to be an infidel; and later, some sort of freethinker. Certainly, he doubted - but as doubt is the prerogative of the believer, that cannot be said, per se, to have precluded the experience of faith. Hence Lincoln, in the throes of depression over his broken engagement in 1841, was so impressed by Lucy Speed's advice to seek solace in the Bible, he declared himself prepared to try. In 1850, after the death of his little son Eddie, he rented a pew in a Springfield Church - even if he attended spottily. His friends recalled his keen interest in religion, and how he was wont, sitting in his law offices, to discuss theology. It was not until the advent of Civil War, and the death of his 11 year-old son Willie, in 1862, that Lincoln came to experience both solace and clarity from faith - having embraced, at last, a divine uncertainty.

It should be noted that Lucy Speed's advice to Lincoln to read the Bible did not presuppose that he had not read it. Indeed, he was exceptionally biblically literate. The issue then, was not familiarity, but rather faith: and that it might have on him, as it had on her, a salutary effect.Signed Photo ("A. Lincoln"), as President, sepia-toned, oval quarto. Washington D.C., October 3, 1861. Inscribed to Lucy Gilmer Fry Speed, as follows: "For Mrs. Lucy G. Speed, from whose pious hand I accepted the present of an Oxford Bible twenty years ago." Framed.
Read More

For Mrs. Lucy G. Speed, from whose pious hand I accepted the present of an Oxford Bible twenty years ago.