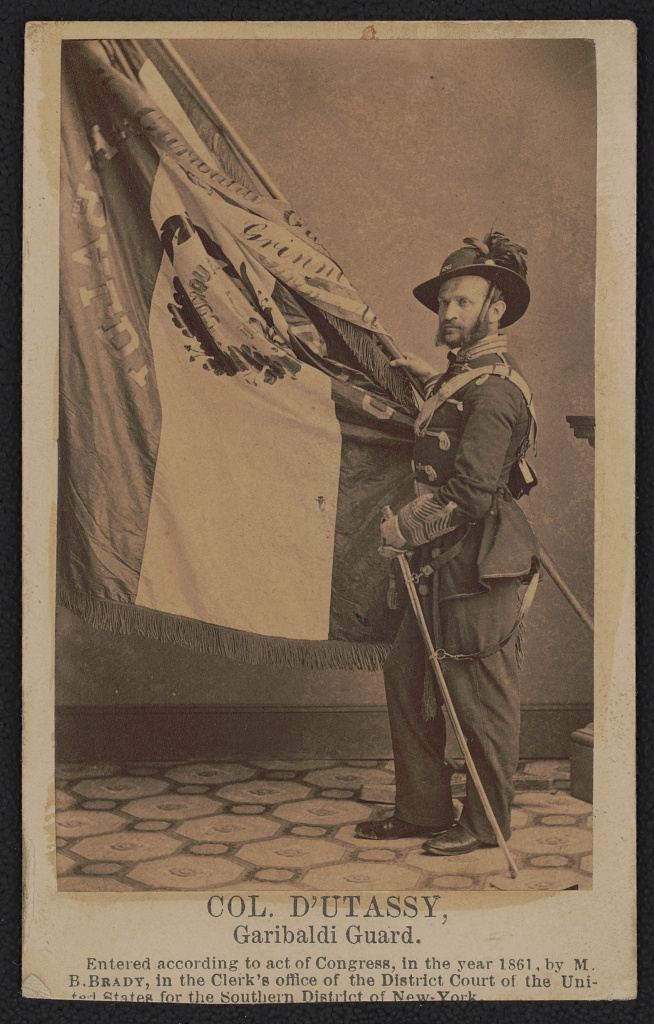 Thousands of military records of Civil War soldiers have been reviewed at the National Archives for The Shapell Roster.  Some soldiers only have a page or two to indicate their small but important part in this turning point of our nation’s history; others leave a long paper trail.  But few soldiers leave their mark or raise as many questions as Colonel Frederick George d’Utassy of the 39th NY Infantry.

Colonel d’Utassy was not included in Simon Wolf’s roster of Jewish Civil War soldiers; his name was discovered in a not particularly flattering article published in the New York Tribune.  Amongst many other allegations, the paper claimed that d’Utassy changed his name to hide his former identity, and most importantly for the Roster Project, that he was Jewish. Generally presented in a negative context— was this contention that d’Utassy was Jewish a fact, or merely another attempt at tarnishing his already spotty reputation?

Much has been written on the infamous service of Colonel d’Utassy.  If he lived today, his name would be splashed across the covers of US Weekly and the National Enquirer, and we would peruse his supposed exploits as we stood in line at the grocery store.  But much like those whose lives currently serve as tabloid fodder, the true story of his life remains elusive. An alleged Hungarian aristocrat, d’Utassy was said to have worked as a dancing master, secretary to the Governor of Nova Scotia, and a professor of languages after fleeing his homeland.  He claimed in statements given to the War Department that he left Hungary after the failed Revolutions of 1848, where he deserted the Austrian army to serve with his father for his mother country.  Perhaps because of this former experience, d’Utassy helped to form the 39th NY Infantry, or “Garibaldi Guard,” shortly after the Civil War broke out.  The unit quickly became known for their lavish uniforms and colorful Colonel.  But, after two years of commanding the regiment, and a multitude of complaints and scandals, d’Utassy was finally cashiered in 1863 and sentenced to one year of hard labor at Sing-Sing Prison for “[u]nlawfully selling and disposing of Government horses for his own benefit” and “[c]onduct prejudicial to good order and military discipline” — namely opening private mail, selling appointments in his regiment, and altering and padding muster rolls before submitting them to the Pay Department. It was during his trial that the New York Tribune published the story that lead the project to d’Utassy, including the following account on d’Utassy’s origins:

“We have been at the trouble of collecting, from the published accounts of the D’Utassy court-martial and among his personal acquaintances in this city, the materials for a personal sketch, which, although necessarily meager, will be found not uninteresting even to the general reader. It seems that in 1848, when the Hungarian revolution broke out, the officers of the huzzar regiments, on arriving at the city of Pesth, found in the Jews’ quarter a man of the name of Strasser, who kept a second-hand clothing store, and who seemed to be in confidential relations with the horsekeepers of the Hungarian plains which surround that city, and with whom he had an extensive business connection. Strasser, upon being applied to, furnished a number of horses, obtained from his friends, to the troopers of the patriot army, and ultimately formed a connection with the quartermaster’s department in the capacity of a clerk. The person who gives us this information was in one of the regiments, and was personally acquainted with Strasser at that time. He lost sight of him for some years, but finally, in the spring of 1861, when the Garibaldi Guard was being formed in New York, recognized in the elegant and influential D’Utassy, Strasser, the Jewish clothes-dealer of Pesth.” In the many varying accounts of his life, some acknowledge d’Utassy as formerly being Strasser, and some claim the story was merely an attempt to discredit d’Utassy.  According to The Thorny Rose: The Americanization of an Urban, Immigrant, Working Class Regiment in the Civil War. A Social History of the 39th New York Volunteer Infantry, the Colonel’s powerful friends “begged him to set the record straight, to refute the charges, to act swiftly to neutralize the scandal… [but] D’Utassy refused to answer what he considered to be ridiculous and insulting calumny.”  Even with the accounts that identify d’Utassy as Strasser, most do not address the issue of the Colonel’s religion; and those that do provide no source. Was d’Utassy’s silence really due to principles, or because there was some truth to the stories?

These accounts of his past were believed by men in d’Utassy’s regiment.  While amassing its case against d’Utassy, the Army interviewed the Chaplain for his regiment, Antony P. Zyla, on d’Utassy’s dealings.  Along with some of the crimes d’Utassy was eventually convicted of, Zyla also accused d’Utassy of blackmailing inferior officers into purchasing horses from him, carrying on affairs with other officers’ wives, having an “excessive thirst after gold” and manipulating the system to get his brothers commissions; “one of his brothers, like him, bearing an assumed name and well known in the streets of Washington as a professional gambler[.]”

In addition to alleging some very serious breaches of conduct, Zyla’s statement referenced d’Utassy’s supposed double identity, and showed the Chaplain’s rather un-Christian view of his Jewish comrades. He claimed d’Utassy required Zyla to pay him a portion of his salary every month- “$30, for the maintenance as he said, of a due splendor of his household as a Colonel, born a noble-man, while, even at that early epoch [he] had already heard from [d’Utassy’s] own countrymen that he was a Jew.”  Zyla voiced his objection to this taking, seemingly not because of the impropriety of an officer requiring his men to support his extravagances, but because he believed d’Utassy to be in actuality a Jew.  This sentiment got worse when Zyla recounted the Colonel’s dealings with Stonewall Jackson at the surrender of Harpers Ferry:

“Col. D’Utassy, although a perfect coward in adversity, but proud and crass in prosperity, told Stonewall Jackson, when asked what his officers said to the conditions of the Harper’s [sic] Ferry surrender, that he was never wont to ask his officers their opinions at all, but he himself was the embodiment of the supreme will in his regiment….  His sophistry is a cake, baked of Jewish covetousness, gipsy [sic] eccentricity, and the sensual proneness of a beast.”

The Chaplain’s words do not merely evidence a great dislike for his former commander, but show deep-seated hatred and distrust of a people as a whole.  Simon Wolf’s The American Jew as Patriot, Soldier, and Citizen was written in response to a great wave of anti-Semitism in the late 19th century; and Jewish historians have often described— in generalizations, but rarely with specificity— great prejudice against the Jews in the ranks during the Civil War. However, Shapell Roster researchers have run into relatively few examples of this bigotry in the primary source records from this period.  The case of d’Utassy is one of those few.

Zyla’s statement proved helpful to the Roster project, however, because his references to d’Utassy gaining commissions for his two brothers led to them getting tracked down as well.  A search through the New York Compiled Military Service Indexes and rosters for the 39th NY Infantry, with corroboration from contemporary newspapers, presented a Mr. Anthony d’Utassy and Mr. Carl von Utassy. Photograph of Carl Von Utassy and Frederick George Together

Anthony or Anton d’Utassy served as a Captain and Carl von Utassy served as a 1st Lieutenant under their older brother in the 39th NY Infantry.  And by a stroke of luck, Carl’s widow applied for a pension- providing, a century and a half later, unbiased proof that the three Utassy brothers were, in fact, the Jewish Strassers.  Bertha Utassy applied for a pension in 1892, twenty one years after Carl’s death.  To prove her status as Carl’s widow, she contacted the US Consulate to Austria-Hungary in Vienna for help gaining official records. The record of Carl and Bertha’s marriage was found in the Marriage Record of the Civil Recorder’s Office “of the Jewish Confession, of the 10th Ward of the City of Warsaw,” stating that a ceremony was performed by the “Rabbi of the District and City Warsaw Cheim Davidsohn” on October 26, 1852.  The names given of the two united were Carl Strass and Bertha Nelken, however— no form of the name Utassy was present.  The final page of the marriage transcript submitted by the US Consulate is actually a deposition taken from two residents of Vienna— an attorney and a journalist— swearing “that the Carl Strass or Strasser mentioned in the herewith annexed Certificate of Marriage, is identical with Carl von Utassy late Lieut 39 N.Y. Vols., and who with the sanction of the R. Hungarian Government has changed his name of Carl Strass or Strasser into that of Carl von Utassy.”

Based on this evidence, Bertha Utassy was granted her pension, and we were finally able to learn at least part of the truth about Frederick George d’Utassy and his storied past.  Frederick, Carl, and Anton were most certainly brothers, so this primary source evidence is enough to show that all three left different identities behind in Hungary.  Whether, when still living as the Jewish Strasser, d’Utassy also acted as horse trader and second-hand clothes dealer remains to be seen.  What is clear is that through a change of name and scenery, d’Utassy built himself a vibrant and exciting life.