But Kennedy was up to the task: his early life, education, heroism in the Navy, the loss of his brother in the Second World War, and his grasp and perspective of needed government reform had prepared him to lead the country through existential threats and toward a progressive future.

The arc of John F. Kennedy’s life has become American legend, from the challenges and remarkable feats, all the way up to the potential that was relinquished in his abrupt, tragic end. This exhibition looks deeper into Kennedy’s story, through the words and images of John F. Kennedy himself.

Curated here are a selection of items from the Shapell Manuscript Foundation that are currently on display at the exhibition. Despite health problems, Kennedy was determined to serve his country during World War II, and his service and heroics have become the stuff of American legend. In 1942, Kennedy requested to train at the Naval Reserve Officers Training School in Chicago and was accepted. After completing officers’ training, he went to Rhode Island to complete training at the Motor Torpedo Boat Squadrons Training Center. In December, he received his first assignment to command a Patrol Torpedo (PT) boat, PT-101, in Panama. He wanted to see combat duty, however, so he requested a transfer and was assigned to PT-109, based in the Solomon Islands. When the boat was destroyed after it was deliberately rammed by a Japanese destroyer, Kennedy’s heroic actions to save his crew earned him both a Purple Heart and a Navy and Marine Corps Medal.

This logbook appears to be the only evidence that John F. Kennedy ever took flying lessons. Kennedy took the lessons while stationed at the Submarine Chaser Training Center in Miami, but he does not appear to have kept up the training afterwards, perhaps because of the death of his brother Joe, Jr., who died while piloting a B-24 just ten weeks later. Signed twice by Kennedy, the log also includes Kennedy’s time flying solo. John F. Kennedy thanks a friend for her condolences regarding the death of his brother, Joe, Jr. A U.S. Navy Lieutenant, Joe died in action in August 1944, when his plane exploded over England. Sadly, airplane crashes would claim the lives of other Kennedy family members: JFK’s sister Kathleen died in a plane crash in 1948. Sixteen years later, Ted Kennedy was badly injured in a plane crash that killed two of his fellow passengers. In 1999, John F. Kennedy Jr. was killed when a piper he was piloting crashed into the Atlantic Ocean, which also claimed the lives of his wife and sister-in-law. 10 years ahead of his assassination, JFK makes a portentous remark about visiting Dallas. Shapell Manuscript Collection.

Alvin Owsley was a U.S. Ambassador during Franklin D. Roosevelt’s administration and was involved in politics throughout his life. Kennedy’s letter to Owsley, addressed to him in Dallas, is dated almost ten years to the day on which he would make his ill-fated trip to that city as President. In a sad, ironic twist, Kennedy concludes the letter with the hope that he will be able to see Owsley during “one of my visits to Texas on another occasion.” JFK to Dwight D. Eisenhower on the transition of power. Shapell Manuscript Collection.

Their relationship was built on taut political tension. Yet, on January 21, 1961, his first full day in the White House, John F. Kennedy, who at 43 was the youngest man ever elected president, writes a cordial note of gratitude to his presidential predecessor, Republican Dwight D. Eisenhower. Eisenhower, almost three decades Kennedy’s senior, is thanked for “one of the most effective transitions in the history of the Republic.” A few weeks after being sworn in, JFK ominously wonders what the next four years will reveal. Shapell Manuscript Collection.

Renowned photographer Alfred Eisenstaedt took many iconic photos of President John F. Kennedy, including presidential portraits. During a photo session in February 1961, Kennedy signed Eisenstaedt’s guest book, “To Alfred Eisenstaedt, who has caught us all on the edge of the New Frontier. What will the passage of the next four years show in his revealing photos.” Kennedy’s reference to the “new frontier” came from his speech accepting the 1960 presidential nomination in Los Angeles, saying, “We stand today on the edge of a New Frontier—the frontier of the 1960s—a frontier of unknown opportunities and perils—a frontier of unfulfilled hopes and threats.” Sadly, despite his many successes and high hopes as president, the “passage of the next four years” would ironically be cut down to only 1000 days, abruptly ending with JFK’s assassination in Dallas. JFK on the future of the Space Program. Shapell Manuscript Collection.

Kennedy writes to Secretary of Labor Arthur Goldberg in this May 1961 letter, urging him to help quickly resolve labor disputes that threatened to delay the missile and space programs. Kennedy, who viewed the space program as a symbol of the New Frontier, announced to Congress less than two weeks later that “this nation should commit itself to achieving the goal, before this decade is out, of landing a man on the moon and returning him safely to the earth. No single space project in this period will be more impressive to mankind, or more important for the long-range exploration of space; and none will be so difficult or expensive to accomplish.” In 1955, President Dwight Eisenhower vowed to support the South Vietnamese in their efforts to fight the Communist North and sent the first military advisors to Vietnam. As the Vietnam War progressed and John F. Kennedy assumed the presidency, he felt greater pressure to give additional support to the South Vietnamese. In October 1961, he sent this letter to his military representative, General Maxwell Taylor, asking him to go to Saigon to assess the situation and report his findings and recommendations. Ultimately, Taylor would suggest increasing aid to South Vietnam in an effort to stop the spread of communism in Southeast Asia. Although by 1962 Kennedy had increased the number of troops to 9,000, he had vowed never to get mired in a war thousands of miles away from home. At the peak of the United States’ involvement in the conflict in 1969, 500,000 troops were stationed in Vietnam. The war ended in 1975 when communist forces seized Saigon and the country became the Socialist Republic of Vietnam. In order to keep himself occupied after back surgery, John F. Kennedy took up painting as a hobby and painted this watercolor of the Kennedy home in Palm Beach, Florida, in 1955. He had given the painting to the Tubridy family, friends in Ireland, and years later was reminded of the gift in a warm correspondence with Aine Tubridy on March 13, 1962, that brought “all kinds of happy memories” to him. John F. Kennedy composed this letter of condolence to the wife of civil rights activist Medgar Evers after he was brutally murdered by a Ku Klux Klansman. Ironically, Evers was killed just hours after Kennedy gave a speech calling for integration and an end to discrimination based on race. The draft misspelled Evers’s name and was noted only after Kennedy had signed the letter along with a handwritten postscript. He added the same postscript to the corrected draft later received by Mrs. Evers. JFK on his successful trip to Europe. Shapell Manuscript Collection.

In the summer of 1963, John F. Kennedy visited Europe, touring West Germany, Ireland, and Italy. While visiting Berlin, he gave his now-famous “Ich bin ein Berliner” speech to over one million Germans in which he promised to stand with them in the fight against communism. After the visit, John F. Kennedy wrote this letter to General Truman Landon to thank him for coordinating a safe and successful trip. At the end of June, 1963, President Kennedy traveled to Ireland and spent a happy three days visiting family and friends. Soon after his return home, Kennedy wrote to close friend Dorothy “Dot” Tubridy, noting in a handwritten postscript that the trip “couldn’t have been better. We loved it – All of your countrymen were wonderful to us and so were you. I hope you get better soon and that you will come and see us here.” John F. Kennedy wrote to the brother of his sister-in-law Ethel to thank him and his wife for their message of condolence on the death of his infant son, a devastating loss for the family. Patrick Bouvier Kennedy lived for less than two days after his birth on August 7, 1963, succumbing to Infant Respiratory Distress Syndrome; he was one of five children to die during the tenure of a sitting president. 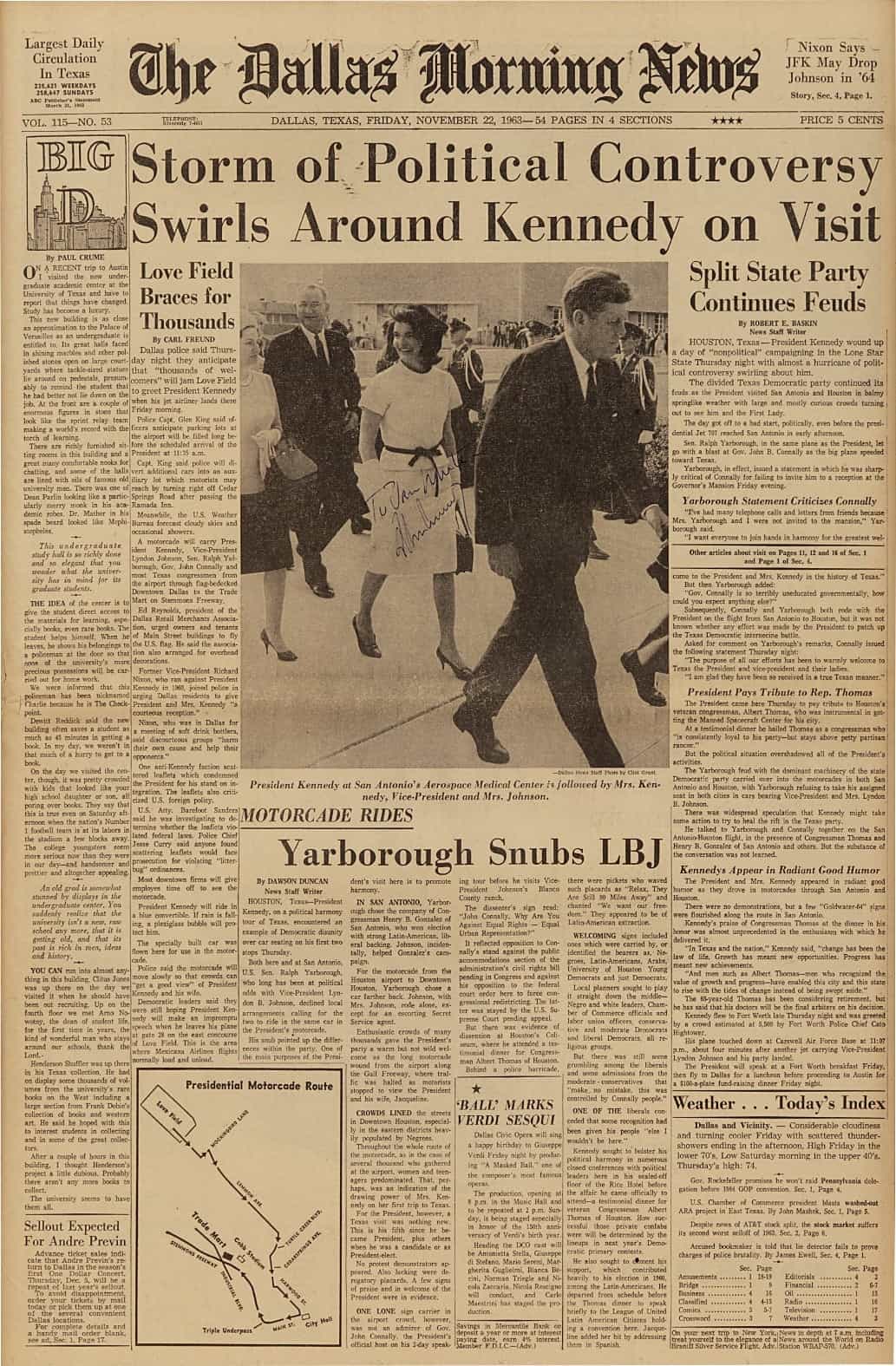 This newspaper was one of the last things Kennedy signed just hours before his death. He had spent the night of November 21st at the Texas Hotel in Fort Worth, and at around 9am on the morning of November 22nd, Jan White, a hotel chambermaid, encountered the President in a hallway and requested an autograph on a newspaper she had with her. Kennedy inscribed the photograph of himself and Mrs. Kennedy, on the front page of the Dallas Morning News, “To Jan White – John Kennedy.” Later that morning he and Jackie left the hotel and flew to Love Field in Dallas. Eerily, the paper chose to include a map of the Presidential motorcade route in Dallas on the bottom left of the front page. The State Democratic Executive Committee of Texas had planned a dinner for the evening of November 22, 1963, to welcome President Kennedy to Dallas. The dinner would never take place, however, as the president had lost his life to an assassin’s bullet earlier that afternoon.

Iconic image of LBJ taking the Oath of Office aboard the presidential plane. Shapell Manuscript Collection. After the sudden death of John F. Kennedy, Vice President Lyndon B. Johnson took the oath of office aboard the presidential plane and immediately departed for Washington, D.C., to assume his new role as the 36th President of the United States. Taken by White House photographer Cecil Stoughton, and signed by the new president, it famously shows a distraught Jackie Kennedy still in her skirt stained with her late husband’s blood, standing next to Johnson as he is sworn in by Judge Sarah T. Hughes of Texas. The banner headline announcing the shocking and incredulous news of the president’s assassination the day before. President Kennedy dated this birthday letter to Dan Flood four days after the assassination. Kennedy, about to leave on a political trip out west, took care, as was the custom of busy presidents, to sign and send in advance letters of a routine nature, and this was intended to arrive with his “warmest congratulations” precisely on November 26th, Flood’s 60th birthday. Sent before Kennedy left for Texas, this is a rare, post-dated letter received posthumously by Flood.