On April 12, 1945, Generals Eisenhower, Bradley, and Patton were taken to inspect Ohrdruf Nord concentration camp near Gotha. It was not one of the most gruesome camps: just an ordinary slaughterhouse, stinking of death, with 3,000 or more naked and emaciated corpses barely in or on the ground, rotting, lice crawling over them. Bradley was revolted; Patton withdrew to vomit; Eisenhower, his face frozen white, forced himself to examine every nook and cranny of the camp. Three days later, in his first letter home, Eisenhower wrote this account of his experience:

The other day I visited a German internment camp. I never dreamed that such cruelty, bestiality, and savagery could really exist in this world! It was horrible.

Autograph Letter Signed (“Ike”), as General of the Army, 3 pages, quarto, no place [Rheims, France], April 15, no year [1945]. To his wife, Mamie Eisenhower. With transmittal envelope, signed in full as censor.
Read More 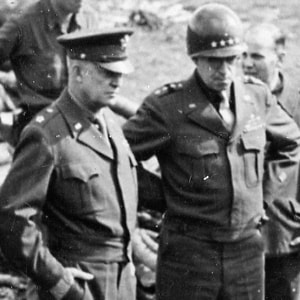 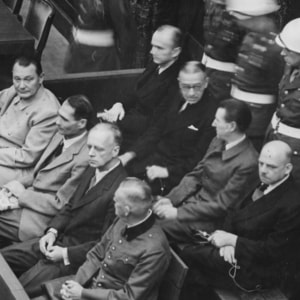 Night before last I saw John - and the experience makes a bit of a tale.

He is on a new job - and already occupying a position properly belonging to a captain. He was right where he should be and had a particularly important task to do (at least it was important to him and to his unit)[.] Just at that moment he received an arbitrary order to report to Army H[ead]q[uarte]rs (120 miles away). He suspected it was just that I wanted to see him, so he had his immediate boss call back to ask whether the matter was "personal" or "official." He received word to obey the order! So he jumped in a liaison plane, reported in, and hoped to leave again in an hour. That was about 5:00 p.m. - and though he was informed that the purpose of his visit was to see me - I didn't get in until 8:00. He fumed.

The trouble had come about in a most

curious way. It is difficult for me to remember that an expression of a slightest whim or wish on my part is [text is crossed out] likely to start a lot of things in motion in a hurry. When I was going past that particular hq on that morning I said "If my son is close by, I'd like to spend the evening with him. But he is not to come in if he is far away, or if he is busy." But - the man left in charge knew I wanted to see my boy. So - ­hell or high water, in he came. He was put out; so was I; but we had a nice evening. The next morning he and I got up at 6:00, so he could get back to his proper place by 8:00 - but the fog was such he couldn't get off until 9:00 - he was fit to be tied! But I hope everything came out all right for him.

The other day I visited a German internment camp. I never dreamed that such cruelty, bestiality, & savagery could really exist in this world! It was horrible.

Well - we're doing pretty well! If we all hang together, tightly, we ought to get this job done one of these fine days! God, how I hope!

Take good care of yourself my sweet - I'm glad you are visiting in Florida. I'd like to be there with you. Give my best to Danny and all my love to you.

Censored by:
Dwight D Eisenhower [in autograph]
General of the Army, U.S. Army