Add to History Board Share Print
Back to About Shapell
Publication Date: April 1, 1994
By Benjamin Shapell
Originally published in INSIDER'S REPORT, April, 1994. “I don’t know whether it’s the finest public housing in America or the crown jewel of the prison system.”
– Bill Clinton, on life in the White House, November 7, 1993.

The office of the President can be a perilous place, and not only when it comes to one’s personal safety. New Presidents quickly begin to realize that the White House can be a lonely and isolating place, despite all its princely amenities. While the “house” serves as a safe haven and refuge, Presidents frequently complain that they cannot lead normal lives, that the job of the Chief Executive takes away their freedom.

In essence, the residence itself and the workload itself are inseparable.  “Working out of one’s home” provides virtually no escape from the frustrations of such a demanding position.  For many of its inhabitants, the Presidential chair has seemed more like the electric chair.  Why anyone would even consider running for office in the first place, let alone pursue a second term, is baffling to most of us.

In fairness, however, the White House has provided quite a pleasant experience for many Presidents, such as Theodore Roosevelt and Ronald Reagan.  And Thomas Jefferson, three months into his first term, seemed to like the place well enough, calling the Executive Mansion a “pleasant country residence.”

But for other Presidents, the great responsibility carried by the office quickly turned into an overwhelming burden, showing its true face quite early on.  Just one year into his term of  office, President John Tyler wrote happily of the few occasions when he could escape from the “prison” of his office.

On December 21, 1850, only five months into his term, Millard Fillmore referred to the White House as “that temple of inconvenience.”  Four months into his term, and just days before he was shot by assassin Charles Guiteau, James Garfield wrote to his wife of his isolation: “I am…altogether alone in this very deserted house.”

Nine months into his term, on December 13, 1885, Cleveland wrote to his bride-to-be: “I have been thinking a good deal lately how nice it would be to have a little home a few miles away and live there – coming into the White House at regular times and having all the official business here, but having a place where it should not enter, and where the President and his family could live like other people.”

Almost one year into his term, Chester Arthur lamented the “never ending and still beginning pressure upon my time and attention.”

Certain Presidents seemed to carry the burden of the Chief Executive’s pressured life much heavier than others, through both national and personal upheaval.  For them, all the benefits, glory and material gains of living in the White House couldn’t keep away the everyday problems of the common man: tragedy, loneliness, and sorrow.  Rutherford B. Hayes, having been accused of stealing the election of 1876, entered office with a cloud hanging over his head.  To avoid a ruckus, he was secretly sworn in as President in a private ceremony one day before his official inauguration.

Harry Truman also had his share of troubles, as the only one of eight Vice Presidents to inherit a major war along with the Presidency upon the death of his predecessor.  Only four months after taking over the office of President, Truman decisively ordered that the atomic bomb be dropped to put an end to World War II.

Some Presidents, however, were caught unprepared and found it difficult to rebound from setbacks and unexpected events that effectively crippled their Presidencies.  Jimmy Carter’s attempted rescue in 1980 of American hostages in Iran provides a tragic case in point.

On other occasions, Presidents’ personal tragedies within the spacious, but confining, boundaries of the White House weighed heavily on top of their already incessant burdens of responsibility. Abraham Lincoln signed the Emancipation Proclamation freeing the slaves within its very walls. But it was there, less than one year before, that he witnessed the death of his eleven-year-old son, Willie – the only child of a President to actually die in the White House.

Shortly after he took office, Calvin Coolidge also experienced the loss of a son: sixteen-year-old Calvin, Jr., who died of an infection from a seemingly innocent blister sustained while playing tennis on the White House grounds.  “When he went,” wrote the former President in his autobiography, “the power and glory of the Presidency went with him.”  Coolidge’s surviving son, John, summed up the cruel irony: “I supposed that [Father] thought if he hadn’t been President, Calvin wouldn’t have been playing tennis and wouldn’t have gotten the blister.”

Early in his first term, Woodrow Wilson lost his wife of nearly thirty years.  And Presidents-elect Andrew Jackson and Franklin Pierce each suffered devastating blows shortly before their respective inaugurations.  In Jackson’s case, it was the death of his beloved wife, Rachel.  For Pierce, it was the violent death of his eleven-year-old son, who was killed right before his eyes in a train accident.

As President Bill Clinton enters his second year in office, circumstances dictate that now might be a logical time for him to reflect upon the challenges he faces, as well as upon the frustration and disillusionment of being President.  Needless to say, his domestic plate appears to be quite full these days.

In previous issues of Insider’s Report we have followed Clinton’s transition and inauguration, as well as the first 100 days of his administration.  In “Crossroads and Transitions: The Transfer of Executive Power” (January, 1993), we wondered if Clinton and other Presidents-elect ever stopped to ask themselves, “What am I getting myself into?”  Today, Clinton, like some second-year Presidents before him, might likely be wondering: “What have I gotten myself into?”

It was once said that Bill Clinton never got over his boyhood handshake with President John F. Kennedy in the Rose Garden all those years ago, and that his life was devoted to going back there to live someday.  Perhaps now he has second thoughts about ever having considered throwing his hat into the ring.  Like Tyler, Fillmore, Grant and Cleveland, Clinton is certainly not immune to the “second-year blues.”  In his first 100 days, Clinton’s approval rating slipped to 45%.  No newly-elected President since Eisenhower has tumbled so low in a Gallup Poll so early in his term.  Perhaps that accounts for Clinton’s revealing remark on April 23, 1993 that he had “spent a year in Washington this week.”

And it just doesn’t seem to be getting any better.  Despite some success with the budget deficit, NAFTA and the Brady Bill, Clinton has had a difficult time appointing people to key government positions and, apparently, an even more controversial time keeping them in those jobs (see “Clinton and the Ladies”).   Allegations by Arkansas state troopers of Clinton’s secret romantic liaisons late last year took the President and the country by surprise.  And the projected ace of his first term, his own health care plan,  is in trouble – a problem compounded by the departure of Clinton’s powerful ally, Senate Majority Leader George Mitchell.

The biggest political crisis Clinton faces, however, remains the “Whitewater” controversy, the troubled Arkansas real agency estate deal gone awry, the proverbial monkey on his back.  As the President arduously defends himself and the First Lady against charges of wrongdoing, mounting evidence in Washington points to a possible obstruction of justice in the Whitewater case – a charge even more damaging, perhaps, than the original real estate controversy.  Meanwhile, the Republicans are lustfully hoping to “even the score” on the 20th anniversary of Watergate (although Whitewater seems to pale in comparison to Richard Nixon’s orchestrated program of domestic espionage).  At this critical crossroads in his Presidency, could Bill Clinton possibly have imagined a worse nightmare?

The Clinton Presidency faces an uphill struggle, indeed.  In a recent Wall Street Journal/NBC News Poll, only 35% of Americans said that they were very confident that Mr. Clinton has the “right set of personal characteristics” to be President, down from 50% a year earlier.  And only 33% of those polled, down from 50% last year, give him high marks for his “ethical and moral values.”

The very same Clinton who bolted out of the starting gate one year ago has now fallen back to regroup.  But so goes the Presidency.  The pressure and the isolation just don’t ever seem to get any easier to bear, no matter how far along a President is into his term.

Benjamin Harrison, in a letter he wrote after more than three years in office, complained: “How very hot & very lonesome – not a soul in the house but me.”

And James K. Polk, writing at the beginning of his third year in office, remarked: “After my constant confinement here, for more than two years, with the exception of less than a week last summer, I feel that some little respite from my public labours and cares – will be proper, if not necessary.”

Bill Clinton has already voiced his need to get away from it all, and he is only entering his second year.  Echoing Tyler’s “prison” thoughts, as well as Polk’s feelings of  “confinement,” Clinton summed up his first year in the White House thusly: “Well, it’s pretty confining.  And I always say I don’t know whether it’s the finest public housing in America, or the crown jewel of the prison system.  It’s a very isolating life.”

Nevertheless, the President seems to be up for the challenge. Not long ago, he conceded that the bad days are just part of being President.  “I didn’t run to have a pleasant time,” he noted.  On the other hand, Clinton emphasized the fact that public officials are as human as the rest of us: “They need to recharge their batteries, they need to let their spirits soar, they need to let their hair down, and it’s just difficult to do if the only place you can do it is sort of in your house.  You can never do it outside, ever.  It’s tough.”

No wonder the President is perceived by so many as living in a “bubble.”  Such is an aptly described analogy for the confinement of the White House, for while the President may catch a glimpse of the outside world, he remains isolated from that same world.

Harry Truman wanted no more of the “hot seat” when he turned down a chance to run for re-election in 1952.  He never regretted it or missed it.  High office had sought Harry Truman, not he the Presidency.  When a reporter asked him what he did his first day back home, Truman responded that he took the suitcases up to the attic and immediately blended in as a private citizen once more. Truman was so happy to get out of Washington that only three years after leaving the most powerful office in the world, he managed to forget the very address where he had served as the nation’s 33rd President, mistakenly referring to 1600 Pennsylvania Avenue as “1600 Connecticutt [sic] Avenue.”

One thing Truman couldn’t forget, however, was the great isolation of the White House itself, which he called the “great white jail.”  What a fitting farewell, and what better way to refer to this “trying place,” whose responsibilities George Washington once described as “an ocean of difficulties.”  President Clinton is certainly in good company, finding solace in an area where, perhaps, he feels the least alone. 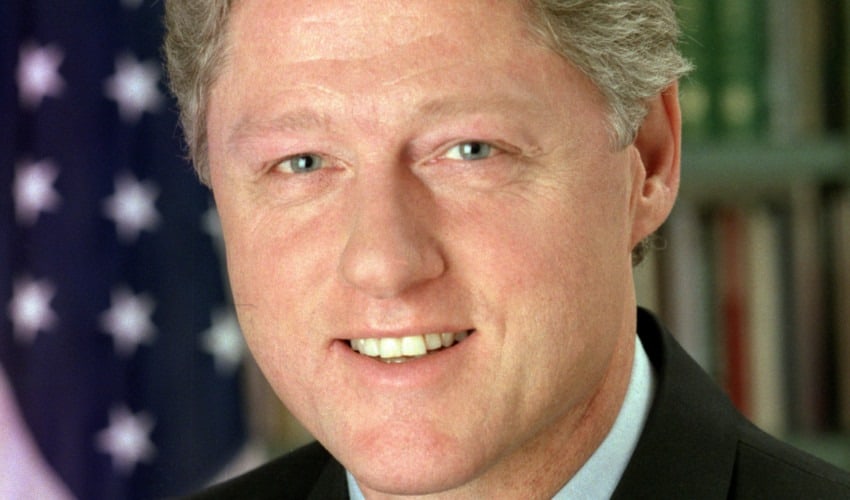