“Dankmar Adler had been an Army engineer. He commanded the confidence of contractor and client alike. His handling of both was masterful. He would pick up a contractor as a mastiff might pick up a cat–shake him and drop him. Some would habitually fortify themselves with a drink or two before they came up to see him. All worshipped him.” (Frank Lloyd Wright: An  Autobiography, p. 106)

Frank Lloyd Wright, who trained under Dankmar Adler revered his mentor, “The American Engineer,” and “my Big Chief,” whose manner, it seemed to Wright, was shaped by his time serving the Union in the Civil War.

Like many of the soldiers included in the Shapell Roster, Dankmar Adler was an immigrant. He was born in Germany in 1844. According to Adler’s family, his father named him Dankmar as a combination of Dank (German for thankfulness) and Mar (Hebrew for bitter), expressing his grief at losing his wife a few days after the joyous occasion of the birth of his son.{1}  Rabbi Adler remarried and moved his family first to Detroit, where he served as rabbi for Temple Beth El.  In 1861, he then became Rabbi of the Kehilath Anshe Ma’ariv Synagogue in Chicago, IL, and the Adlers moved again.  Dankmar had been an apprentice to a local architect in Detroit, and when he got to Chicago, he found employment as a draftsman. 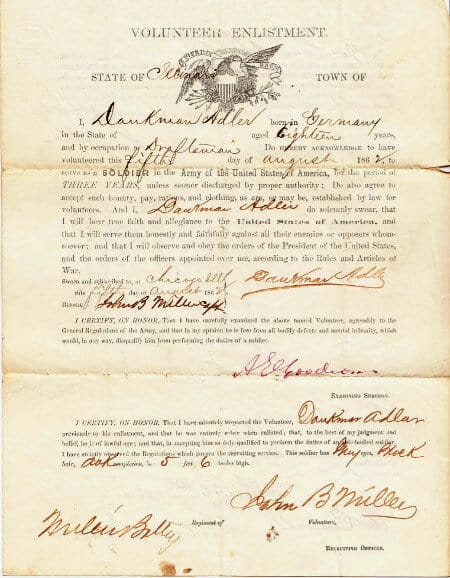 The Adlers’ move to Chicago coincided with the build-up to and beginning of the Civil War, and in August of 1862, Dankmar Adler enlisted in the Union Army.  The US Naturalization Indexes show that Adler did not become a citizen of the United States until 1888, so he would not have been eligible for the draft instituted during the Civil War.  And working as a draftsman, Adler would not have been in any great need of money; unlike many of the poor immigrants enlisting in the service. His decision to enlist seems only to have been motivated by a sense of pride in or duty to his adopted home; a choice stemming from patriotism and honor.

Dankmar Adler joined the 1st Illinois Light Artillery as a Private.  Indeed, it was during this time that Adler, who had been rejected by the University of Michigan due to the entrance exam, brushed up on his engineering knowledge:

“Being an artillery man, I enjoyed opportunities for stealthily carrying extra baggage in ammunition chests, et. [sic], and availed myself of the opportunity thus afforded me for carrying quite a number of scientific and historical books, the unrighteous spoil of various Southern homes, which books I studied as diligently as circumstances permitted.”{2}

He was promoted to Corporal during his service, but requested to be reduced back to Private.  No explanation is given in the soldier’s service records as to why he made this decision. In March of 1865, as the war was winding down, many men detached for special duty were being returned to their regiments to be mustered out.  This left the Department of the Cumberland’s Topographical Engineer Office in desperate need of draftsmen. So, Adler was sent down to Nashville, at the request of the Chief Engineer of the Department of the Cumberland, to fill that void.  He remained at the Topographical Engineer’s Office until the end of July 1865, when his unit returned to Chicago to be mustered out. Immediately after the war, Adler returned to his work as a draftsman in the Chicago firm of Augustus Bauer. However, the tensions between Adler and Bauer that caused the former to leave the latter were not artistic in nature. Bauer, Adler claimed “hurt my patriotic amour propre by what I construed into sneers at my military career which appeared to him as a waste of precious time.”{3}

In 1870, according to the US Census, the 26-year-old Adler was still living at home with Rabbi Adler.  But Dankmar’s career was about to take off. In 1871, he formed a partnership with architect Edward Burling.  Following the Great Chicago Fire of 1871, business boomed. Adler married Dila Kohn in 1872, the daughter of Abraham Kohn, who helped found the Kehilath Anshe Ma’ariv Synagogue. Abraham Kohn is well-known for sending then President-elect Abraham Lincoln a silk American flag, hand painted by Kohn himself with lines from the Book of Joshua in Hebrew.  You can read more about Kohn and his flag in the Shapell Manuscript Foundation’s book Lincoln and the Jews – A History.

Adler’s success continued to grow.  He was able to open his own firm in 1879 and shortly after, formed what is often referred to as one of the most significant and influential partnerships in American architecture, when he hired a young Louis Sullivan. Louis Henry Sullivan has often been referred to as the “father of skyscrapers,” a designation that would not have been possible without the training and initial success with his partner Dankmar Adler.  Adler was formally trained as an engineer and believed that Sullivan’s creative and artistic abilities would be an ideal match to his more technical training. Adler’s premonitions were correct and his sense of structure along with Sullivan’s artistic eye lead them to become extremely successful, designing around 180 buildings during their 15-year partnership.

Adler and Sullivan achieved initial fame as theater architects, using Adler’s expertise in acoustics and Sullivan’s artistic eye to create beautiful and functional designs.  One of their most well-known buildings, the Auditorium Building in Chicago, was completed in 1889, with a young Frank Lloyd Wright hired to draft finished drawings of the interior of the project.  Wright would spend five years working for the firm, learning from Adler and Sullivan, and developing his distinctive style. Adler and Sullivan also designed the new Kehilath Anshe Ma’ariv Synagogue (1891), where Adler’s father was the Rabbi.  After this time, Adler and Sullivan focused primarily on office buildings and created some of the most famous designs of the time including the Wainwright Building in St. Louis, MO (1891) and the Guaranty Building in Buffalo, NY (1896).

Despite their enormous success, Adler and Sullivan split in 1895, citing that year’s economic depression as the reason for their separation.  Adler agreed to continue to consult on Sullivan’s projects, and went into practice with his sons Sidney and Abraham. Adler’s career was cut short by his early death on April 16, 1900, from a stroke at the age of 56.  He is buried at Mount Maryiv Cemetery, a Jewish Cemetery in Chicago, IL.

Dankmar Adler’s legacy goes far beyond his designs, lasting buildings, and writings on architectural theory.  Both the partner and the apprentice he inspired would go onto create and write theories about the most important architectural designs of the 20th century.  Sullivan would go on to command the new Modernist movement with new technologies such as steel-frame construction and be a mentor and inspiration to young American Architects of the Chicago School such as Frank Lloyd Wright.  Sullivan was also one of the ten architects chosen to build the major structure of the “White City” at the World’s Columbian Exposition in 1893. Frank Lloyd Wright’s work became the zenith of American architecture.  Like most of Wright’s personal and professional relationships, his tenure at Adler and Sullivan did not end on the best of terms, but without their help, Wright would not have been able to influence the Chicago and Prairie Schools of Architecture and design masterpieces such as Fallingwater, the Ward Willits House, the Robie House, or Unity Temple.  Despite their tumultuous relationships, for the rest of his life, Wright continued to refer to Sullivan as “Lieber Meister” (German for “Dear Master”) and to Adler as “The Big Chief” as a sign of respect.

The Shapell Roster is excited to tell Dankmar Adler’s story, and help memorialize not only his part in modern American architecture; but his part in American history as a whole.  He was one of the many brave young men, who chose to fight to defend the Union when he did not have to; and he channelled that extraordinary courage later on in his work.