Hayes, discussing a recipe for an alcoholic beverage - like a vegetarian on hamburgers or a celibate on sex - is hardly a reference; and here, presenting a cup forged from the metal propeller of Admiral Farragut’s Civil War flagship, the Hartford, he gets the recipe for Roman Punch wrong. That fashionable 19th century sorbet was a frozen concoction of lemons, oranges, water, egg whites, sugar and – this is where the President is in error – whiskey or champagne. Hayes, however, first denigrates the course - “swindling spoon victuals” – and then insists it “contains no rum or other spirits but are merely flavored with juniper or the like.”

The Hayes’ White House, famously, was a bastion of Temperance – earning Mrs. Hayes the sobriquet “Lemonade Lucy” – although it was rumored that the disapproving staff served oranges infused with a rum-based Roman Punch. Hayes later debunked this, saying that his orders were to flavor the Punch with the same flavors found in Jamaica rum – and the joke wasn’t on himself and Mrs. Hayes, but the drinkers. 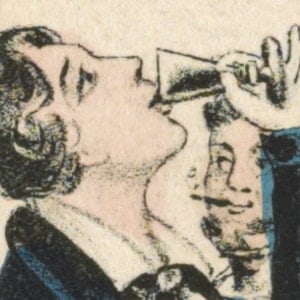 The bronze cup made from the metal of the propeller of Farraguts ship, the "Hartford."

This cup is not a drinking cup.  It will do for those swindling spoon victuals called Roman punch, which contains no rum or other spirits but are merely flavored with juniper or the like - but use it or show it as you please always being reminded of