Here Tyler says the Presidency is a prison, from which he can only escape for minutes.  Oppressively occupied and “in the midst of a great political storm”, he is trying to steer the ship of State into a safe harbor: if he can do this, he says, then “whatever after may befall”, he will be content…

Facing Dorr’s Rebellion in Rhode Island, a hostile Congress, and  without a political party to call his own, Tyler writes of his – literal - half-hour of happiness with his children; the filth and dilapidation of a White House slowly being cleaned; and his willingness to judge who, among all the women in his family, is the best manager, the best housekeeper, and the best wife. “In the way of politics”, he adds, things are stormy as usual, with the exception of the Rhode Island: that alone looks better.

Tyler, despite the exhaustion and dread expressed here, wanted a second term as President: no one, however, would have him.
Autograph Letter Signed (“J. Tyler”), as President, 3 pages, recto and verso,  quarto, Washington, May 8, 1842. To “My Dear Wife,” Letitia Christian Tyler.
Read More

I have postponed writing to you this long because I knew that the children kept you advised of the condition of the family, and because my time has been most oppressively occupied ever since you left.  I have scarcely been able to leave the House until a night or two ago when I went to the May-ball and remained for half an hour.  It was a beautiful scene and one full of the innocence of childhood --  The collection of children was very great -- Alice and Tazewell were dressed beautifully and played their parts, the one of a maid of honour and the other of a page.  I never saw any thing so full of joy and life as Alice was --  She had her hair in ringletts [sic], with beautiful flowers ornamenting her dress, and if Mary and Letty and Lizzy don't mind, my prophecy of her future beauty will be realized --  The next day they were both sick, but are now well --  Priscilla came to the table yesterday and her infant is very hearty -- Its nose is like P-s - except that it is broader at the end --

For many days after you left and when 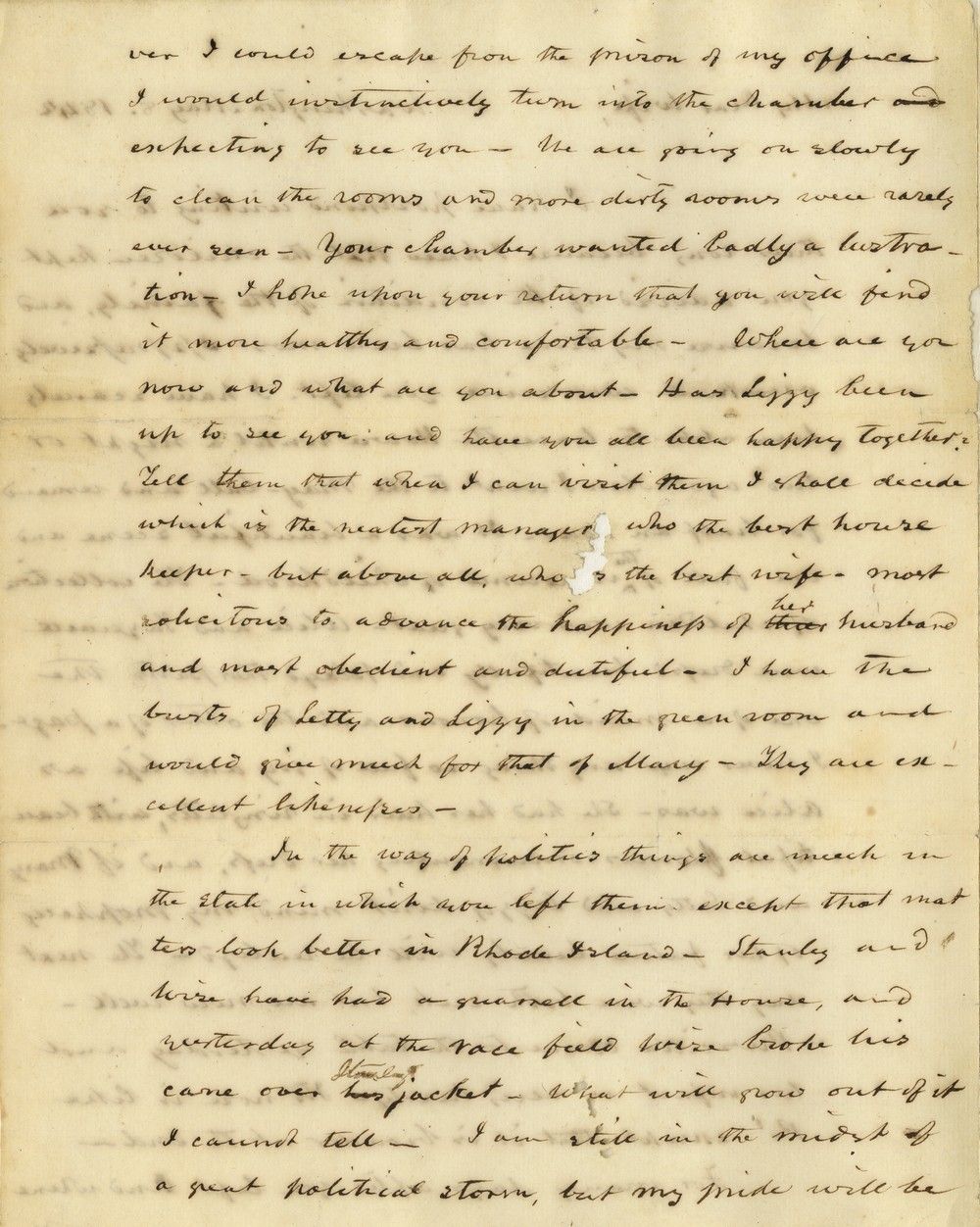 ever I could escape from the prison of my office I would instinctively turn into the chamber [text is crossed out] expecting to see you -- We are going on slowly to clean the rooms and more dirty rooms were rarely ever seen -- Your chamber wanted badly a lustration -- I hope upon your return that you will find it more healthy and comfortable --  Where are you now and what are you about --  Has Lizzy been up to see you: and have you all been happy together?  Tell them that when I can visit them I shall decide which is the neatest manager, who is the best housekeeper - but above all, who is the best wife - most solicitous to advance the happiness of [text is crossed out] her husband and most obedient and dutiful --  I have the busts of Letty and Lizzy in the green room and would give much for that of Mary -- They are excellent likenesses --

In the way of politics things are much in the state in which you left them except matters look better in Rhode Island -- Stanley and Wise have had a [...] in the House, and yesterday at the race Wise broke his cane over [text is crossed out] Stanley's jacket --  What will grow out of it I cannot tell --  I am still in the midst of a great political storm, but my pride will be 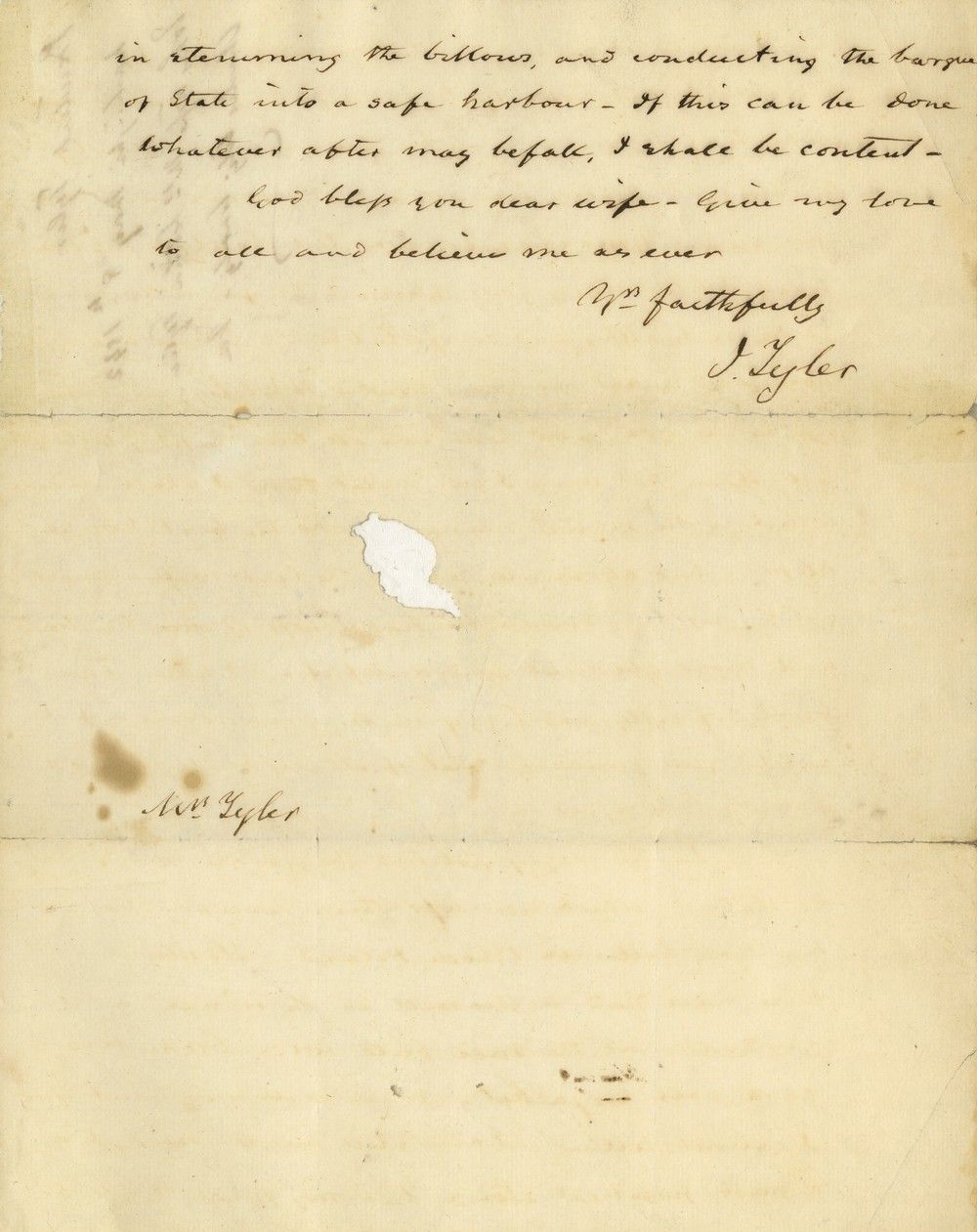 in stemming the billows, and conducting the barges of State into a safe harbour -- If this can be done whatever after may befall, I shall be content -- 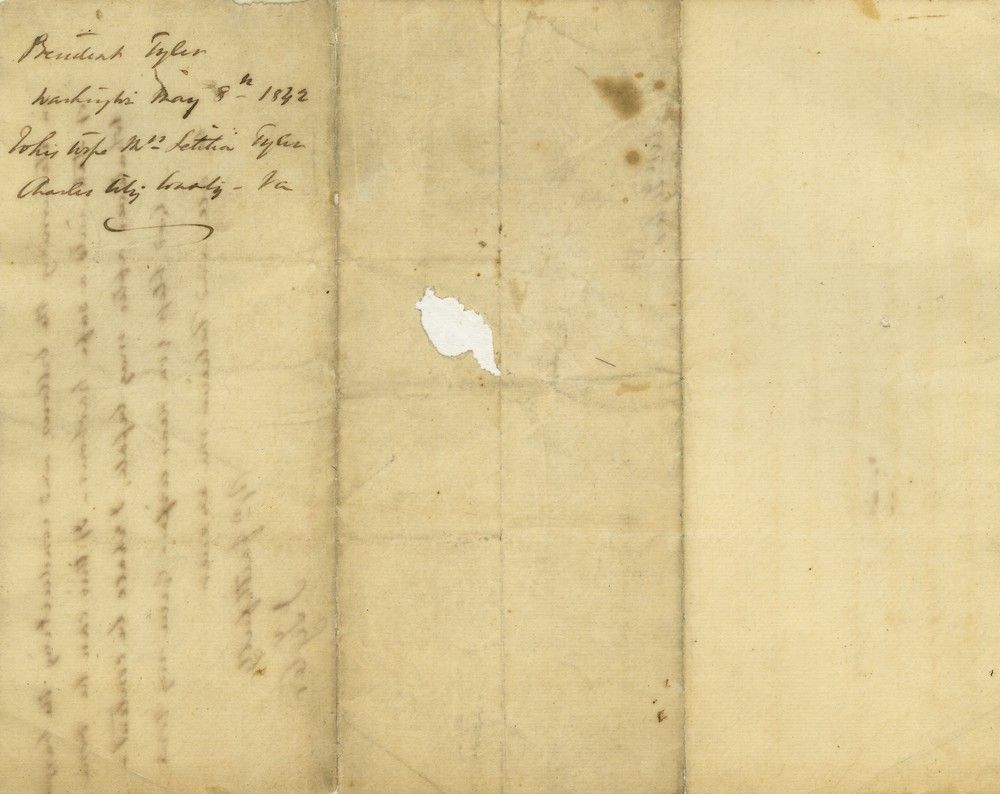 To his wife Mrs. Letitia Tyler