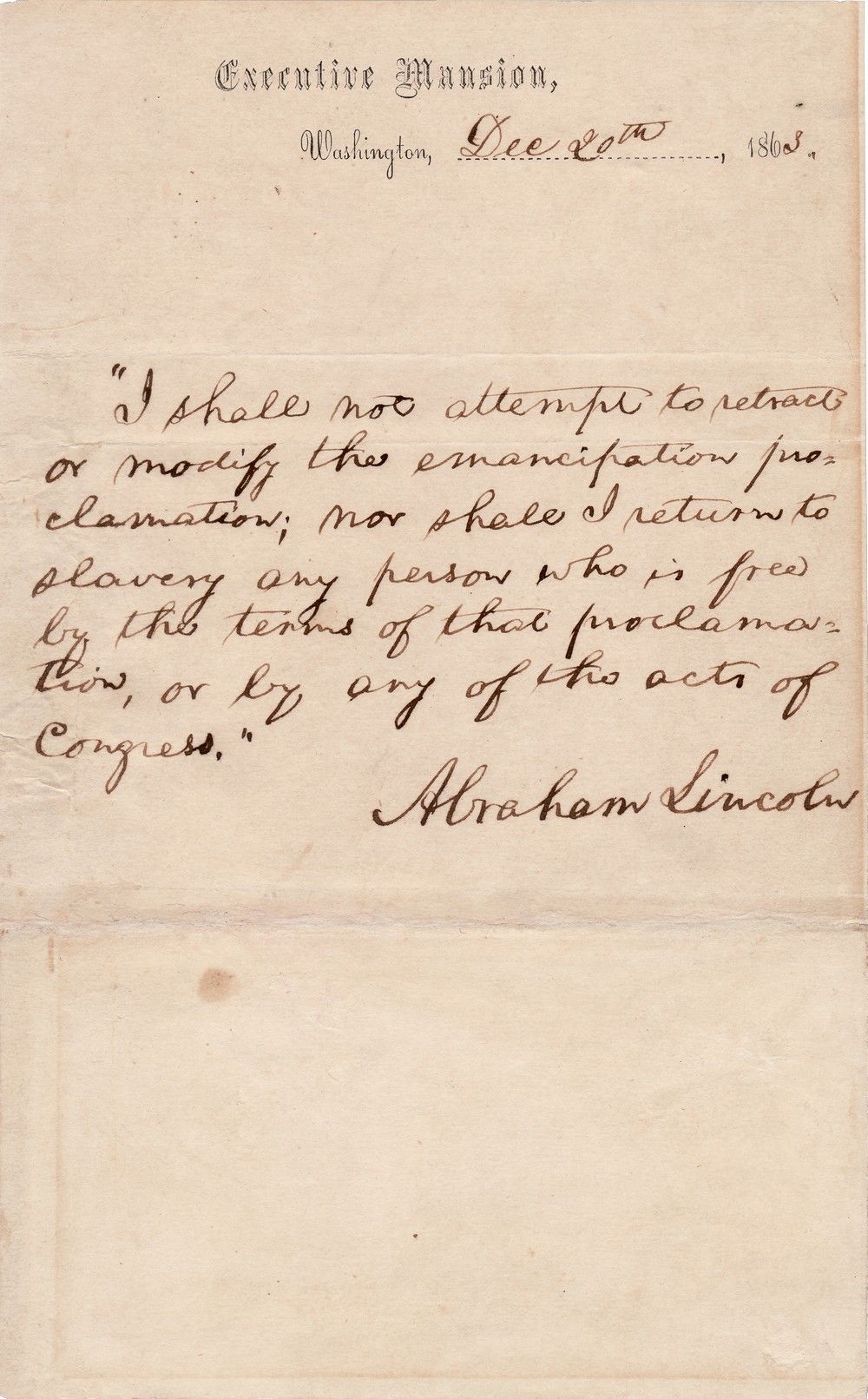 Still, to use a coarse, but an expressive figure, broken eggs can not be mended. I have issued the emancipation proclamation, and I can not retract it. - Abraham Lincoln, January 8, 1863, Letter to John A. McClernand

“I do order and declare that all persons held as slaves, are, and henceforth shall be free…” No other words of Lincoln so changed the lives of Americans as this blunt declaration from his Emancipation Proclamation, issued on January 1, 1863 – and defended for the rest of his presidency. Even after Lincoln wrote - in the eight months following the Proclamation’s issue - four public letters explaining why he was in favor of emancipation, the abolitionist wing of the Republican Party still sought assurance that Lincoln was absolutely committed to the abolition of slavery. In his State of the Union Message of December 20, 1863, Lincoln again stated, unequivocally, his commitment to the Emancipation – prompting the indefatigable organizer of New England abolitionism, Henry C. Wright of the Massachusetts Anti-Slavery Society, to write him a letter:

God bless thee, Abraham Lincoln! With all my heart, & bless thee, in the name of God and Humanity! But – mark! I want nothing of you – you can do nothing for me – except – this one favor… that you will write for me, & subscribe your name to it – with your own hand – this sentence in your late message – i.e., “I shall not attempt to retract or modify… [etc.]” I have given 30 years of my life to the abolition of slavery – by lecturing, by public & private discussion, & by scattering, broad cast, tracts and pamphlets bearing on that subject. I regard the American Republic as the God-appointed Messiah of Liberty to the great family of Nations…

Lincoln, in return, penned those seven memorable lines on the very day of his address:

Present too, is Lincoln's handwritten envelope to Wright, care of Wendell Phillips at the Massachusetts Anti-Slavery Society - in which Lincoln characteristically misspells "Phillips” with only one "l" - but rather curiously, this is not the envelope used to convey the letter. That envelope, in the hand of and franked by Lincoln secretary John Hay, bears an uncommon printed heading: "From the President of the United States." Perhaps Lincoln wanted to emphasize the importance of what was being pledged and, as to the politics of the thing, to whom, by whom - and hence the unusual envelope to make the point that this message, absolutely, came from On High.Autograph Quotation Signed, 1 page, octavo, Executive Mansion, Washington, December 20, 1863. Written in reply to Henry C. Wright, lecturing agent of the Massachusetts Anti-Slavery Society. Of the greatest rarity.
With:
1) an Autograph Note, as President, being the four-line address of Henry C. Wright, 1 page, sextodecimo, no place [Washington], December 20, 1863.
2) an envelope, bearing the unusual printed heading, "From the President of the United States", addressed and franked by Lincoln’s secretary John Hay, copying Lincoln’s note; postmarked “Washington December 20, 1863.”
Used with the permission of Shapell legacy partnership.
Read More 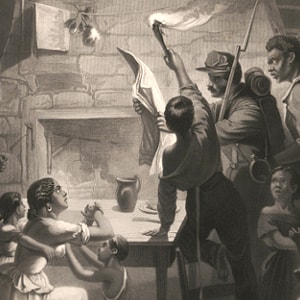 "I shall not attempt to retract or modify the emancipation proclamation; nor shall I return to slavery any person who is free by the terms of that proclamation, or by any of the acts of Congress." 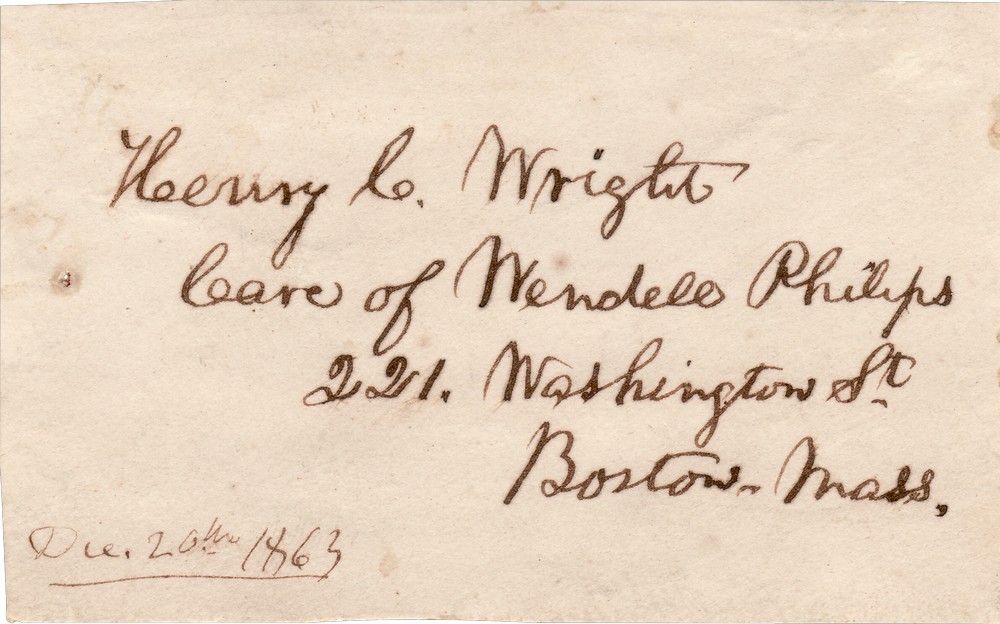 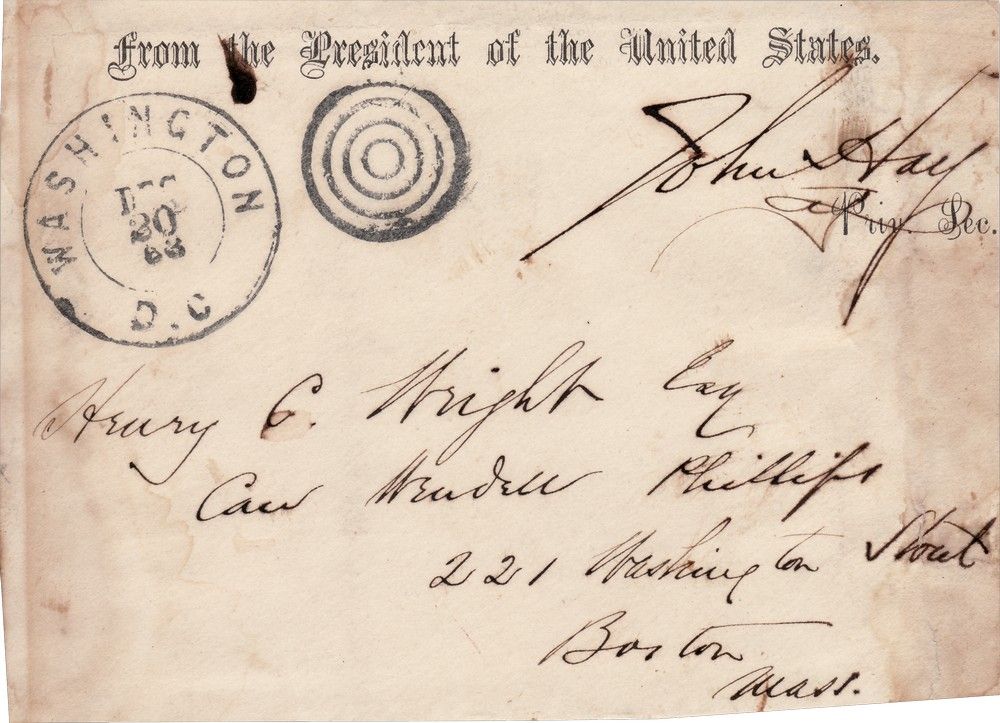 From the President of the United States.