On February 12, 1880, a wooden crate arrived at the White House containing a new contrivance which would, soon enough, revolutionize presidential letter writing: a Fairbanks and Company Improved Number Two Typewriter. Neither Presidents Hayes, Garfield, Arthur or Cleveland used the “type-writing” machine for correspondence, but by the time Benjamin Harrison arrived at the White House, the typewriter was important enough to have its own two small rooms – shared with the telephone and telegraph – and its own operator, Miss Alice Sanger, the first female White House staffer. This letter to a book bindery owner in Philadelphia, thanking him for the gift of an olive wood box which he had made especially for the new President, is the earliest known example of a presidential typewritten letter. As such, it is both alpha and omega, for the advent of the typewritten missive would make the presidential autograph letter rarer and rarer – driving it, almost, to the point of extinction. 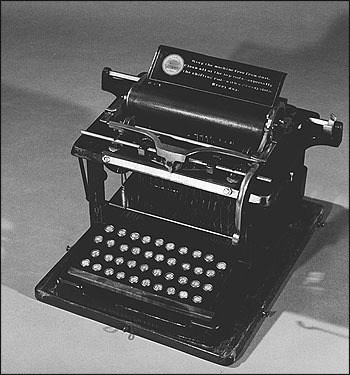 A Scarce Signed Photograph of Benjamin Harrison as President

I take pleasure in acknowledging the receipt of your favor of the 2nd inst. and also of the box made of olive wood.  I beg to express my appreciation of this finely executed specimen of your workmanship, and of the friendly spirit which prompted you to make and send it to me.