Writing a pass for the wife of the man who will, within twenty-four hours, attend his death-bed, Lincoln does a favor for his family physician, Dr. Robert King Stone.

Allow the bearers, Mrs. Dr. Stone, Mrs. Gittings, and a gentleman escort, to pass to Richmond, Va., visit their friends there, and return.

Stone, despite his Southern connections and pro-slavery views, greatly esteemed the President, who, in return, thought him a “skillful physician.” Stone was a frequent caller on the President and his family - treating Mrs. Lincoln’s migraines, Lincoln’s headaches, and the boys’ aches and pains – and attended, in February 1862, at Willie’s death, and Tad’s recovery, from typhoid fever. From time to time Stone would ask, and Lincoln would grant, a favor in connection with Mrs. Stone’s Richmond relations. One such request came on April 11, 1865…

It is with the greatest reluctance, I trespass on your, already, too much occupied time; but my wife is so anxious, about her Sister & their condition, that I cannot refuse, her earnest request.— Your Exclly may rembmr, having granted her (unknown to me) an order, to pass Mourning Garments &c, to her Sisters &c. This, was Gratefully accepted & the box, got as far, as Fortss Monroe, on its way, to her Sisters, in Richmond—But, at Fortss Monroe, Col: Mulford [Lt. Col. John E. Mulford was assistant agent for exchange of prisoners] arrested it, with many others & there, we are induced to believe, it has remained.— Word was sent, by letter, to the supposed recipients; but the box has not yet, gone on, to its goal! Mr Segar,[ probably Joseph E. Segar, former member of Congress from Virginia] of Old Point Va, promised my wife, to look it up & to take it on, to Rchmd, with his own effects, when he went there — He was then, on his way— Perhaps, he will point out, to Col: Mulford's notice, your kind permit — which was “tacked on”, the box, by the express officer, here— But, my wife & her sister, Mrs General John S. Gittings of Balt: Md are almost frantic, to go on, to Richmond & see to the wants &c, of their dearly loved family. Neither General Gettings, nor I, under these most favorable circumstances, can refuse our consent. Your Excellency was so good — some weeks ago — to give them permission, to go; but tempered with the kind advice, not to attempt it.— Would your Excellency, feel it now compatible, with duties &c, to grant these ladies, permission to visit Richmond, for the Sole purpose, of seeing their family & relieving their wants?— It is impossible, for me, to leave my duties here & if your Excelly should kindly grant them a pass; ( for the sole purpose named) — might it not be made, in the name of these ladies & an Escort (gentleman), who will assume the care of them, for me?— I might mention, the names are Mrs Charlotte C Gittings of Balt. Md, Mrs Margaret Ritchie Stone of Wash: DC & a gentleman, Escort.— Your Excellency has been so unwaveringly kind & good to my family, that I cannot bear, to think of this new trespass, on your never ending benevolence; but the anxiety of my wife & Sister, is so great, that I cannot refuse to call upon you— Pray forgive my unwilling trespass…

Surely Lincoln, of all men, could sympathize with another busy man whose wife was in a tizzy over missing dresses and frantic to attend her family: he wrote then, this pass for “Mrs. Dr. Stone,” on April 14th, and set about his day: the last he would ever know.

Dr. Stone was called to Ford’s Theatre later that fateful day, one of the first doctors to arrive at the Petersen House - there to attend the President at his death-bed and autopsy. It would fall to him, too, to tell Robert Lincoln of his father’s fatal condition; to participate in the President’s autopsy; and to take care of Mrs. Lincoln, in the terrible days following the assassination.
Autograph Note Signed (“A. Lincoln”), as President, 1 page, sextodecimo, no place [Washington, D.C.], April 14, 1865.
Of great scarcity on this date.
Read More 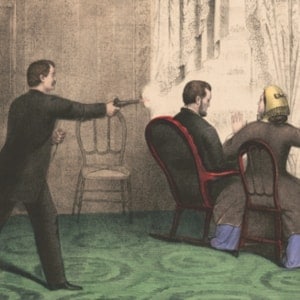 Allow the bearers, Mrs Dr. Stone, Mrs Gittings, and a gentleman, escort, to pass to Richmond, Va., visit their friends there, and return.