President John F. Kennedy believed strongly in the idea of service. Before he became president, he volunteered for the U.S. Navy during World War II and heroically saved the life of another sailor. As president, Kennedy emphasized the importance of young people engaging in national service. At his inauguration, he implored Americans to “ask not what your country can do for you, but what you can for your country.” He created a new agency, the Peace Corps, which provided opportunities for young Americans to work on service projects in developing countries. His own public image was also built on the idea of service both as a politician serving the public and, before that, as an officer in the US Navy during World War II. Why was Kennedy so interested in promoting service? Do Kennedy’s ideas about service still apply today? In this module, students will explore Kennedy’s idea of service and then apply what they have learned in their own “ask not” activity to encourage young people today to engage in service. “But the New Frontier of which I speak is not a set of promises — it is a set of challenges.  It sums up not what I intend to offer the American people, but what I intend to ask of them.  It appeals to their pride, not their pocketbook — it holds out the promise of more sacrifice instead of more security.

But I tell you the New Frontier is here, whether we seek it or not.  Beyond that frontier are uncharted areas of science and space, unsolved problems of peace and war, unconquered pockets of ignorance and prejudice, unanswered questions of poverty and surplus.  It would be easier to shrink back from that frontier, to look to the safe mediocrity of the past, to be lulled by good intentions and high rhetoric — and those who prefer that course should not cast their votes for me, regardless of party.”

In your hands, my fellow citizens, more than mine, will rest in the final success or failure of our course. Since this country was founded, each generation of Americans has been summoned to give testimony to its national loyalty. The graves of young Americans who answered the call to service surround the globe.

Finally, whether you are citizens of America or citizens of the world, ask of us here the same high standards of strength and sacrifice which we ask of you. With a good conscience our only sure reward, with history the final judge of our deeds, let us go forth to lead the land we love, asking His blessing and His help, but knowing that here on earth God’s work must truly be our own.

Compelling Question: What does it mean to live a life of service? Why is Kennedy’s emphasis on service to the greater community and world important today? Life’s Lessons: John F. Kennedy Advises a College Student What Classes to Take for a Life in Politics 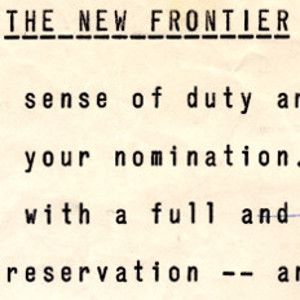