Four Shapell Manuscript Collection items populate the first case in the exhibition, which set the stage for exploring Lincoln’s growing knowledge and maturity as a writer through his earliest, self-taught attempts with language. From his teenage “sum book,” which included basic arithmetic and early experiments in poetry and prose, to his various literary influences as he matured –including Robert Burns and especially Shakespeare, to further attempts to find his own literary voice, as seen in his honest, and more serious effort in poetry, My Childhood Home (1846), which nonetheless he insecurely refers to here, a year after he penned the poem, as “doggerel.” Lincoln’s language would, over time, culminate into literary masterpieces that would sustain a nation during its bloodiest war.

These four letters, along with similar manuscripts in the exhibition, are the genesis that would lead up to Lincoln’s stunning and timeless public addresses, as well as some of his personal letters as president. Forty years after Lincoln’s earliest attempts at writing, we see in one powerful, concise display case the apex of the exhibit: the phenomenally transformative public Gettysburg Address and Second Inaugural address, and a single profound, intimate masterpiece of human consolation, drawn from his own early experience of personal tragedy. Lincoln sought to heal and comfort individuals made most vulnerable by the cruelties of war, as seen in this remarkable condolence letter to twenty-two year old Fanny McCullough.

This virtual exhibition includes select Shapell Manuscript Collection pieces on display at the Morgan Library and Museum. A complete online version of the exhibition, along with supplemental materials, is available at The Lincoln Institute. His education, Lincoln said, was deficient: it lasted, formally, but a year. At sixteen years old, Lincoln created a personal notebook, known then as a sum book. Blank paper was a rare and precious commodity in frontier Indiana, and that Lincoln choose to use it to understand mathematics,  joke around, and express an elegiac sensibility, is telling. Here, amid arithmetical calculations, he also writes a piece of doggerel, daydreaming about his future: “Abraham Lincoln his hand and pen he will be good but God knows When.” To Minimize the Risk of Ridicule, Lincoln Arranges for the Anonymous Publication of His Most Famous Poem, “My Childhood Home I See Again.” Shapell Manuscript Collection.

As Congressman-Elect, Lincoln writes to a fellow lawyer, Andrew Johnston, about the publication of a a series of poems in the Quincy Whig:

“To say the least, I am not at all displeased with your proposal to publish the poetry, or doggerel, or whatever else it may be called, which I sent you. I consent that it may be done, together with the third canto, which I now send you…. but let names be suppressed by all means. I have not sufficient hope of the verses attracting any favorable notice to tempt me to risk being ridiculed for having written them.”

Accordingly Johnston published anonymously, in the May 5, 1847, edition of the Quincy Whig, the first two cantos of Lincoln’s most serious poetic effort, “My Childhood Home I See Again”, giving them as a main title “The Return” and as subtitles “Part I – Reflection” and “Part II – The Maniac.” The third canto mentioned here by Lincoln does not, however, appear in the Whig. If, as may be supposed, the third canto consisted of “The Bear Hunt,” Johnston may well have concluded that it was unsuitable for printing as a companion piece to the other cantos. Lincoln may have read Shakespeare more than all other writers combined, but references of him in his letters are rare indeed. Here, relating to the end of the Mexican-American War, a war that Lincoln had opposed, he alludes to “Othello’s occupations’s gone.” Lincoln mentioned but one other time, in writing, the death of his mother and never, but here, his sister. In 1844 Lincoln paid his respects at the graves of his mother and sister in Indiana, following a fifteen- year absence. The visit had a profound impact on him, and during a period in which he was practicing his prose, Lincoln wrote a long poem grappling with their deaths. Nothing, apparently, could adequately describe, as a man, what he felt as a boy, growing up in Indiana. All he had to say, he said here, as follows:

My childhood home I see again,
And sadden with the view;
And still, as memory crowds my brain,
There’s pleasure in it too.

O Memory! thou midway world
‘Twixt earth and paradise,
Where things decayed and loved ones lost
In dreamy shadows rise,

And, freed from all that’s earthly vile,
Seem hallowed, pure, and bright,
Like scenes in some enchanted isle
All bathed in liquid light.

As dusky mountains please the eye
When twilight chases day;
As bugle-notes that, passing by,
In distance die away;

As leaving some grand waterfall,
We, lingering, list its roar—
So memory will hallow all
We’ve known, but know no more.

Near twenty years have passed away
Since here I bid farewell
To woods and fields, and scenes of play,
And playmates loved so well.

Where many were, but few remain
Of old familiar things;
But seeing them, to mind again
The lost and absent brings. By the end of 1862, the tragic immensity of the war’s carnage had settled into fact, and Lincoln had already written a number of painful letters of consolation. None, however, spoke more eloquently to the searing devastation of loss, and the haunting promise of solace, than the words he penned to twenty-two year old Fanny McCullough on the death of her father in battle.

Lincoln begins by describing the nature of life: “In this sad world of ours,” he writes, “sorrow comes to all; and, to the young it comes with bitterest agony, because it takes them unawares. The older have learned to ever expect it… I have had experience enough to know what I say.” He then identifies how misery can distort a fundamental truth: that there is help, in time, for easing suffering. “The memory of your dear Father, instead of an agony, will yet be a sad sweet feeling in your heart, of a purer, and holier sort than you have known before…”

Though smarting from the immediacy of his own bereavement – his young son Willie had died earlier that year – this letter is, in our view, one of Lincoln’s only references to the long-ago death of his mother, Nancy Hanks Lincoln, in his boyhood, and clearly refers to the dominating element that Lincoln had in common with Fanny, and perhaps the reason for the letter: the death of a beloved parent at a young age. 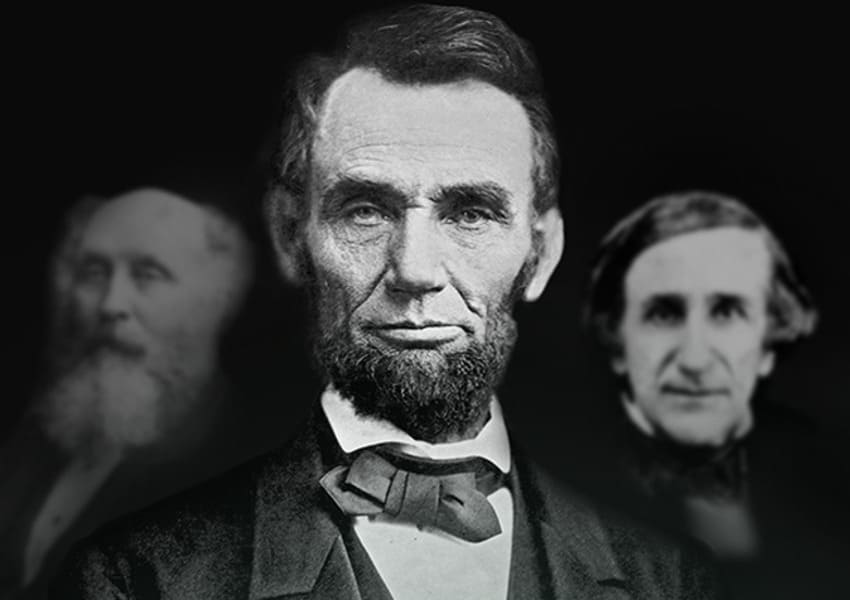