The mourning stationery on which this letter is written was, most likely, for Theodor Herzl, whose death on July 3, 1904 Weizmann - whom many considered Herzl's successor - took personally. Shapell Manuscript Collection.

In the Shapell Manuscript Collection, there are a number of black-bordered manuscripts that are available to the public to view online. It’s easy to overlook this aspect of letter writing and stationery, but to the writer and recipient of such papers, this border signifies an important sociological phenomenon. These marked papers, known as mourning stationery, are immediately identifiable by a black border surrounding the page, and are often accompanied by a black-bordered envelope. The recipient would instantly understand that the sender is in mourning. Though this practice has its origins in the seventeenth century, it became popular in the Victorian era and remained in vogue for much of the nineteenth and first part of the twentieth century.{1} Generally, the mourner would begin with a thick black border around his or her stationery, which would narrow over time. The thickness of the black border on this letter from Abraham Lincoln, sent four days after his son’s death, could suggest
that Lincoln had entered a period of mourning quite recently. Shapell Manuscript Collection.

While some have asserted that a genealogist can date a death by measuring the thickness of the black border on undated mourning stationery, custom varied and remained subjective.

Mark Twain’s calling card still bears a rather thick border, most likely for his daughter Susy, who died six years previously. If one holds fast to the idea that the black trim would decrease with time in strict increments, Twain’s card would call this belief into question. 1902. Shapell Manuscript Collection.

Indeed, the custom also evolved over the centuries. By 1921, in her Book of Etiquette, Lillian Eichler Watson maintains that white stationery is “correct for all occasions, and mourning is not an exception.” If one were to opt for a black-bordered mourning, stationery, she opines, it ought to be narrow; a border nearly an inch wide is “in bad taste.” When it comes to thank-you cards, she echoes the Victorian idea of lessening the border during the morning period, or keeping it consistent (but narrow, of course) until it’s discarded altogether. 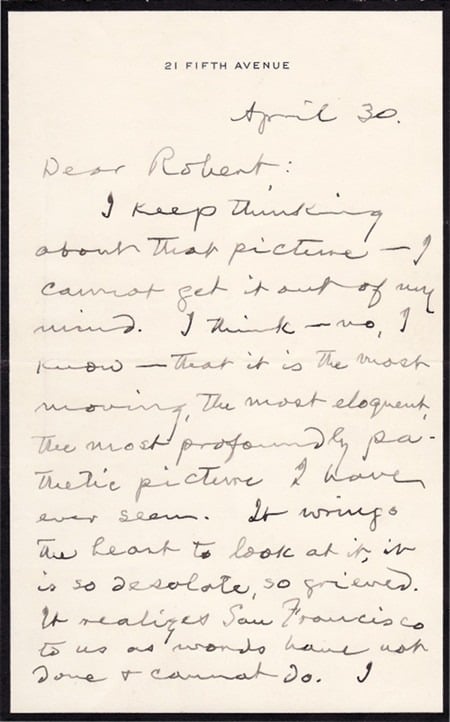 Black borders around print have been a powerful signal of bereavement in American culture since the nineteenth century. Not being confined to personal correspondence, nineteenth century newspapers would run death announcements with a border of black. "The idea of making a light & nonsensical speech, to possibly appear in print in the midst of columns of heart-break walled in from top to bottom with the black bars of mourning for the head of the nation was appalling." - Mark Twain. Shapell Manuscript Collection.

Tellingly, Mark Twain explains in this letter that he can’t deliver a “light and nonsensical speech” to be printed in the paper, along with the “black bars of mourning” on the occasion of President Garfield’s death. Indeed, Hattie Nevada’s 1897 song, The Letter Edged in Black, has been covered by many artists throughout the years, preserving the idea of a black-edged letter or envelope as a portent of bad news or mourning well after the custom had fallen out of favor in the United States. You can hear Johnny Cash singing it here: Chaim Weizmann on the Assassination of Russian Pogrom Organizer Plehve: A Pity He Didn’t Die Years Ago