Poster showing the Lusitania in flames and sinking, with people in the water and lifeboats in the foreground. Issued by Central Council for the Organisation of Recruiting in Ireland. Library of Congress.

Sometimes, the clearest view ahead, is backwards. Theodore Roosevelt, writing 100 years ago today about the sinking of the passenger liner, the Lusitania, by the German Navy on May 7, 1915, saw in its sinking of a neutral American oil tanker, a week before, on May 1st, a terrible prelude. The Gulflight was torpedoed, three merchant marines killed. President Wilson, intent on staying out of war, responded to the outrage by imitating a diplomatic correspondence – of two year’s duration. Roosevelt was apoplectic: not to defend, he insisted, was to embolden. But it was Wilson’s message, and not Roosevelt’s, the German government heard loud and clear. It continued its policy of unrestrained submarine warfare in the years prior to America’s entry into First World War – and remembered the response to it, in the years prior to the Second. Anschluss, Sudetenland, Kristallnacht… 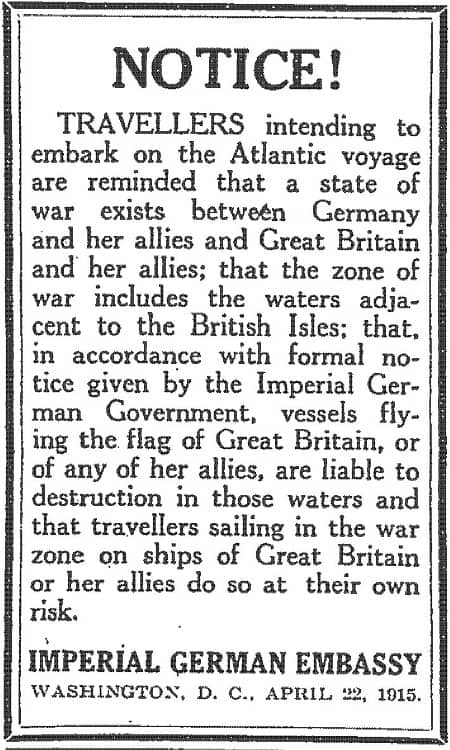 The warning issued by the Imperial German Embassy on 22 April and published in the New York Times and other American newspapers on 1 May 1915.

On May 1, 1915, the Imperial German Embassy in Washington ran a 21-line notice, boldly boxed, in the shipping line advertisements of the New York Times. Transatlantic travelers sailing into the waters adjacent to the British Isles, it declared,  were liable to be killed. It might have added, that neutral merchant marine oil tankers off England’s Cornish coast, were also fair game – a warning, however, too late to reach the Gulflight, out of Port Arthur, Texas, and flying under the American flag.

At about 1:00 in the afternoon, on Saturday May 1, 1915, the Gulflight became the first American ship to be torpedoed in World War I. The tanker was just off the southwestern tip of the Cornish peninsula, on route to Rouen, France,  when a U-Boat, in accordance with Germany’s policy of unrestricted submarine warfare, fired at the vessel, hitting it in the bow.  Three Americans were killed. To Roosevelt, the attack was piracy, pure and simple, and he said so at once. Wilson, publicly, said nothing.  Privately, he said he wanted to ascertain all the facts; he wanted to reach a determination; he wanted, then and only then, to write the Imperial German government, a sharp letter. He was still gathering information when, on May 7th, another German U-Boat torpedoed and sank, fifteen miles off the coast of Ireland, the British luxury ocean liner RMS Luisitania, killing 1,198 people, including 128 Americans. This time Wilson did voice a protest – but that was all. “Americans must have a consciousness different from the consciousness of every other nation in the world,” he declared. “There is such a thing as a man being too proud to fight. There is such a thing as a nation being so right that it does not need to convince others by force that it is right.”  Roosevelt was apoplectic. Exalting peace above righteousness was a mistake; and what peace, exactly, was there, when American property and American lives were wantonly taken? Writing here, some six weeks later, he held Wilson responsible for the carnage:

“I do not believe that Wilson was right on the Lusitania matter. Had he acted with reasonable firmness in the Gulflight business the thousand men, women and children who were murdered on the Lusitania on the high seas would be alive today.”

Wilson, however, was not interested, not when the Gulflight was attacked, or the Lusitania sunk, in making war: he was too busy, that week, making love. A. Scott Berg, in his definitive – and admiring – biography of Wilson states that “In truth, Wilson was not thinking straight – laboring, as he was, over two, even three love letters a day, some requiring more than one draft…”

His wife, Ellen, had died the previous August, and his grief – right up into the moment he met Edith – had been devastating. Edith Bolling Galt was, in the words of White House usher Ike Hoover, an “impressive widow” and two months after meeting her, Wilson – a surprisingly passionate man – proposed. (A joke of the era: “What did Mrs. Galt do when the President proposed?”- “She was so surprised she fell out of bed.”)  Mrs. Galt, however, said no. Wilson plunged into anguish – he couldn’t let her go –  resolved to win her –  and so pled his case, in an emotional haze, day and night, until on June 29th, she relented. They married in the White House in December. By that point, the Allied and neutral tonnage sunk by German submarines had reached 1,620,668 tons. The Gulflight was 5,189 of them.

In an ironic twist, the Gulflight, too, would evince history repeating itself. The ship, though torpedoed, did not sink, and was able to be towed and repaired. In World War II, under the name Refast, the tanker was again torpedoed in the North Atlantic by a German submarine. This time it sunk.