It was, typically, the most public of photos, splashed across thousands of front pages in black and white, the red trail of blood invisible, that made for the most intensely private letters of the Nixon presidency. The newspapers ran the snapshot on May 5th, 1970. The letters were written the day after, on May 6th. Both had to do with the shooting of anti-war protesters at Kent State University in Ohio on May 4th when, at 12:24 p.m., Ohio National Guardsmen, facing a crowd of student protesters, fired off 67 shots in 13 seconds. Nine students were wounded; four were shot dead. Nixon, 350 miles east, in the Executive Office Building in Washington D.C was just then waking from a nap.

His Chief of Staff gave him the news. National Guardsman, no one knew why, had killed four students. Nixon was aghast. “Was this me?” he said, “Was this my fault?” He had, after all, started off the wave of protests four days before with a combative televised address from the Oval Office announcing an “incursion” from Vietnam into neighboring Cambodia. He would, he said then, unleash “our will and character.” And he did. But the shooting of peaceably assembled students on a working-class campus in the American Midwest was not what he envisioned. Was this his fault? That he even asked himself that question was highly unusual. He answered it himself however, two days later, in four handwritten letters of condolence to the parents of the slain Kent State students. That was something else he never did; handwrite letters. Only if something was deeply personal, like the weddings of his girls, or special, like Jackie Kennedy coming back to visit the White House. But Kent State was, to a man who described himself in his memoirs, not inaccurately, as a “monster of self-possession,” an intimate agony. Four letters to four sets of mourning parents, written on the same day, about the same thing, using words hauntingly specific for each family, tell that story.

"I could not get the photographs out of my mind. I could not help thinking about the families, suddenly receiving the news that their children were dead." - Richard Nixon. RN: The Memoirs of Richard Nixon (New York: Simon & Schuster, 1978)

About half past noon, Monday, May 4th, 1970, on the grassy campus Commons of Kent State University, 21-year-old Jeffrey Glenn Miller from Long Island, New York was protesting the American incursion into Cambodia. Sandra Scheuer, a 20-year-old honors student, was crossing the green to her next class. William Schroeder, age 19 and ranked second in his ROTC class, casually watched the campus demonstration. At 12:24, for reasons unknown, 28 Ohio National Guardsmen, assigned to the University to prevent violence, single-fired 67 shots, for 13 seconds, into the crowd.

Jeff Miller, nearly 265 feet from the Guardsmen, was shot dead through the mouth. Sandy Scheuer, about 400 feet from the firing line, took a bullet in the neck: she did not get up. Bill Schroeder, the third fatality, was 380 feet from the line of fire and walking away from the demonstration; he was shot in the back. One more student, Alison Krause, who had been active in the protest, was shot through the arm: the bullet entered her chest and obliterated its contents. A teenage girl who was not a student,  ran up to the body of Jeffrey Miller, now surrounded by a river of blood, and began to scream: a photographer took a picture.

When that photo of Miller’s limp body, and the horrified girl kneeling beside him with her arms raised, hit the papers the next morning, it immediately became iconic (and would go on to win a Pulitzer Prize later that year). Nixon said he could not get the picture out of his mind; neither could anyone else. But Nixon was not, as it happened, like most people. There were essentially two Nixons: the intensely public persona, and the profoundly private man. What happened at Kent State would shatter the shell in which, for so long, he had existed: his “veneer,” as he called it, could not contain the raising turmoil inside.

The brief fusillade at Kent State, and the dark years that engulfed Nixon afterward, perhaps started on April 30th, four days before the massacre. Then, in an especially belligerent Oval Office Address announcing a broad development in the unpopular – and seemingly endless – Vietnam War into Cambodia, Nixon argued that the United States could not act like a “pitiful helpless giant” in a conflict against “totalitarianism and anarchy,” pointedly adding that those enemies were “both abroad and at home.”

As if that incendiary statement was not enough, he further inflamed student dissent across the country by saying, the very next day, that antiwar protesters were “bums blowing up campuses.” Which, “bums” or not, they now did voice their protest, by the millions. On May 4th, four students, right in the middle of Nixon’s “Silent Majority” country, had been slaughtered on a college campus. But Nixon now said nothing. That public version of himself had declared, “We have to be hard as a rock.”

The private Nixon, however, writing to the parents of the dead children, was someone else entirely, deeply affected, if only briefly, by the events of May 4th, when he chose not to speak publicly but to address his feelings and thoughts into the four personal handwritten letters.  What he felt was enough for him to do was what he almost never did: sit down and pen a handwritten letter, and to it, affix his full name. 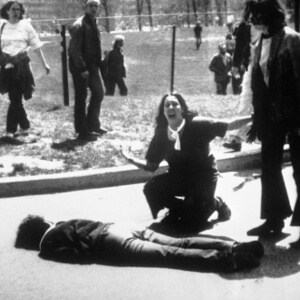 To the parents of Jeffery Miller, Nixon wrote of “the death of one so young”; to the parents of Bill Schroeder, of “cutting off so tragically a life so full of youth;” to the Krauses, he wrote that he is sure Alison “was as close to your hearts as our daughters are to us;” to the Sheuers, who wrote, emphatically, that he, as the father “of two daughters,” keenly understood their loss of Sandra.

It was, however, only a momentary respite from his public self, only a small window to view a part of his inner humanity. By September of that year, he was expressing again how the students were tricked by political extremists “into support of lawlessness, disruption and violence.” He was back to seeing the students as easily-manipulated bums.

After Kent State, Nixon seemed to many close observers, to come apart. He couldn’t sleep (or stop talking: one night the White House logged 50 phone calls from the president between 9 p.m. and 4:00 a.m.) He drank; took pills; behaved erratically. Incredibly, less than a week after the shootings,  he even appeared, like an apparition, at the Lincoln Memorial at 4:30 a.m., ostensibly to show his valet the historical sight but, knowing well that the monument was occupied by anti-war protesters, to talk to them – about, among other things, football. That was, these observers say, the beginning of the road to Watergate, and self-destruction. In Nixon’s words, it may well have been that the tension between the “veneer on the outside” and the “turmoil” inside, had become unbearable. In any case, he never, in public, offered a word of sympathy for Kent State’s dead and wounded.

These rare autograph letters, written in private, were the best – or the only thing, he felt – he could do. In any case, the parents did not seem to accept his attempt at compassion; shortly after receiving the letters, all the families either sold or donated the handwritten notes, clearly wanting nothing to do with Nixon himself.