The 100th Commemoration of the Death of Theodore Roosevelt Theodore Roosevelt, having wanted his whole life to be the bride at every wedding and the corpse at every funeral, finally got at least half of his wish when, on January 8, 1919, he was buried, quietly, in his parish church in Oyster Bay. His death, just two days before, shocked: Theodore Roosevelt dead, after all, was an oxymoron.  It must have been an embolism of the lung, said the doctors, or an embolism of the brain. An infection of the ear, or an inflammatory type of rheumatism. The malaria he caught in the Amazon, after losing the 1912 presidential campaign; the bullet he had taken in Chicago, during it, and still in his body. He had a heart attack; he had heart disease; he had, since the death of his youngest son in battle, a broken heart. No one said, not a whisper, that at 60 – half blind, partly deaf, in a wheelchair – Roosevelt might have taken an overdose of morphine. “The Old Lion is Dead,” son Archie wired his brothers, and the whole world, it seemed,  heard a long, retreating roar. Except, that is, for the pale gaunt man waiting in a train station at Modena, Italy. Reporters watching from the platform as President Wilson read the message that Roosevelt had died, swore he broke into a wide transcendent smile. Why, is the story told here, in one of the very last letters Roosevelt ever wrote…

Theodore Roosevelt, who could loathe just as vigorously as he loved, had no use at all for Woodrow Wilson. That “he kept us out of war” in 1916 was enough, then and there, to despise him. Roosevelt felt that Wilson’s failure to declare war, after the sinking of the Lusitania, was nothing short of cowardly, and said so, unequivocally. Writing in 1916, not untypically, the ex-President as good as cursed the current one:

What a dreadful creature Wilson is! I cannot believe our people have grown so yellow as to stand for him. Even with World War I over, even as he lay dying, the old lion would roar about Wilson, as he does here in 1919, in one of his last letters  – shaking the branches, as it were, with his contempt:

I have frequently erred in judgment and have said so; that unlike Mr. Wilson, I have never erred in intellectual honesty and moral straight-forwardness… as regards Mr. Wilson I never erred but once and that was on the occasion in question, when for the first sixty days after the outbreak of the World War I heartily supported him.  This was a mistake, but it was a generous mistake from proper motives. I have never erred when I opposed him.

From Wilson to the Kaiser was just a skip and a jump for Roosevelt, as he answered how he could praise the German military machine in the face of the horrors it inflicted:

Roosevelt dictated this blast from a sofa, which he could not even rise from to take his meals at the table. Still, he was working, contending, busy beating back death – which managed to take him asleep, in the early morning hours of January 6th.

Death had to take him sleeping, Vice President Marshall remarked, for if he had been awake, TR might have won the fight.

THEODORE ROOSEVELT. 1858 – 1919. The 26th President of the United States. Always a political whirlwind, he came to national prominence as the colonel of the Rough Riders, a Volunteer Cavalry he founded — and then led to glory, during the Spanish-American War.

Typed Letter Signed (“T. Roosevelt”), as ex-president, 1 page, quarto, on the letterhead of The Kansas City Star, New York Office, but written from Sagamore Hill, Oyster Bay, New York, January 3, 1919. To Mr. Carroll E. Armstrong, a supplier of hardware supplies in Clinton, Iowa, in answer to his letter of December 28, 1918.One of Roosevelt’s last letters. Theodore Roosevelt on the sinking of the Lusitania 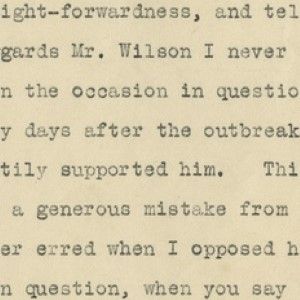