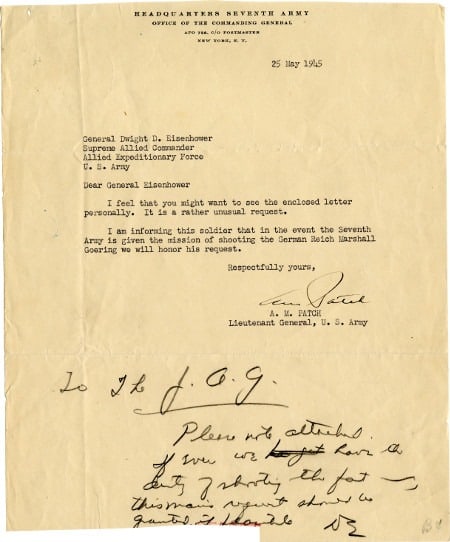 Put aside, if you can, the war itself. Ignore the 60 million dead. Look, instead, at one combatant – Germany. The country which in 1939 started World War II and, in its dozen years of Nazi rule, wrenched hell from below the earth, to the surface. A grotesquely fat man bedecked with jewels is strutting, boots shining, uniform sparkling. He is drug-addicted, manic-depressive, sybaritic, and second only to the Fuhrer in Nazi Germany. Reich Marshal Hermann Goering – president of the Reichstag, founder of the SA, the Gestapo, the concentration camps, and the Luftwaffe – is also responsible for the first and last thing to be remembered about the “Thousand-Year Reich.” He is the chief coordinator, and authorizer, of its driving obsession: the extermination of the Jewish people. How he would be punished – and who would execute him – is the subject of this letter.

The wrongs which we seek to condemn and punish have been so calculated, so malignant and so devastating, that civilization cannot tolerate their being ignored because it cannot survive their being repeated…. – Justice Robert H. Jackson, Opening Statement before the International Military Tribunal, Nuremberg, November 21, 1945

People ignore, deny, forget or never learn…Seventy years have passed since the Nuremberg war crimes trial. I suspect that some readers will not be clear about what led up to the trial… – Joel E. Dimsdale, Anatomy of Malice (2016)

General Dwight D. “Ike” Eisenhower, the Supreme Commander of the Allied Expeditionary Force, had been to his first, and only, Concentration Camp, Ohrdruf Nord, on April 12, 1945, with Generals Patton and Bradley. While Patton vomited and Bradley went mute, Eisenhower forced himself to inspect every nook and cranny of the Buchenwald sub-camp. He never dreamed, he wrote his wife three days later [Shapell Manuscript Collection Eisenhower letter of April 15, 1945], that such cruelty, bestiality, and savagery could really exist in this world. Then he ordered every available army unit not at the front lines, to tour the camp. If they had any doubt what they were fighting for, Eisenhower declared, a visit to the newly-freed concentration camp would show them what they were fighting against. American soldiers would bear witness. Years later, that somber experience would be hauntingly portrayed in the penultimate episode, “Why We Fight” of Steven Spielberg and Tom Hanks’ magnificent HBO drama about WWII in Europe, Band of Brothers. And, as in art, so it was in life…

One 7th Army soldier, apparently, saw enough that he made the request of his superiors that, if Reich Marshal Hermann Goering was to be shot, he would like to do the shooting. One month later, the Commander of the 7th Army, General Patch, forwarded that “unusual request” to Eisenhower – to which Ike replies here, in autograph, addressing his remarks to the Judge Advocate General:

Please note attached. If ever we have the duty of shooting the fat —- this man’s request should be granted if possible. The enormously corpulent Goering would be found guilty, at the Nuremberg Trials, for crimes against humanity: chief among them, issuing written orders for the “Final Solution of the Jewish Question” in 1941. He was condemned to death by hanging, but protested the sentence as being unworthy of his status as a soldier, and requested, instead, a firing squad. When denied, he secretly took poison – committing suicide just hours before he was to be hanged.

The date of Patch’s letter to Ike is May 25, 1945, and Nazi Germany had, as of its writing, been defeated for almost three weeks. As victorious American, British and Russian troops swept through the ruins of the “Thousand-Year Reich,” finding the fleeing Nazi High Command was a chief  priority. Hitler was already dead, a suicide; likewise Goebbels, along with his wife and their six small children (poisoned, by their parents); Himmler, when captured, bit on a cyanide capsule embedded in a tooth, and died immediately. Which left the “Fat —-” himself, Hermann Goering, and he, as befitted his “status,”  couldn’t wait to show up to surrender himself, with a 75 person retinue, on May 7, 1945, to the American 7th Army.  Along with his wife, daughter, sister-in-law, chef, valet, and butcher, he also brought with him sixteen monogrammed suitcases, a red hatbox, two cyanide tablets, and 20,000 paracodenine pills (a morphine derivative) for the 40 (or 100) he needed,  he said, everyday. As it turned out, he wouldn’t need them – or for that matter, get them either.

The Trial of Major War Criminals, held at Nuremberg from November 20, 1945, to October 1, 1946, was tasked by the Allied Powers with indicting, trying, and bringing to justice twenty-two of the Nazi hierarchy for, among other things, crimes against humanity. Goering, Prisoner No. 1 in the dock – the lead defendant and, as it were, team captain of that infernal bench – pleaded not guilty. Nuremberg Trials. Defendants in their dock, circa 1945-1946. U.S. National Archives.

About the systematic murder of 6 million European Jews, Goering claimed that he didn’t know, really. It was terrible, he said, if it happened, barbaric. He’d heard rumors, but he didn’t know and if he had known, well, that’s war, and there was nothing he could have done about it. So unsportsmanlike, he insisted, to kill children. And women! He revered women! “Terrible.” Left unsaid by him, but obvious to all who saw him, heard him, took down his every word: what was terrible is that he had no conscience. And yet this affable monster who, as much as any Nazi, presented a human face to the Tribunal, finally, at the end, felt something truly human: terror. Convicted, sentenced, and led to his cell, his face turned pale, frozen, his eyes popping, hands trembling; he panted on the verge of tears. “Death,” he gasped, as he dropped on the cot of his cell.

Of the twelve Nazis condemned to death by hanging, two escaped their fate. One, Martin Bormann, sentenced in absentia, had unbeknownst to the Allies (and everyone else, until 1998), committed suicide on May 2, 1945. The other was Hermann Goering. Somehow, though watched by American guards 24-hours a day, the night before he was due to hang, he managed to swallow cyanide.

Ten Nazi war criminals were hanged, then, on the Nuremberg gallows, on October 16, 1946. They went, these wreakers of the worst destruction in human history, peaceably; save, that is, one. Julius Streicher – so despicably, obsessively and virulently anti-Semitic that even his own Nuremberg co-conspirators loathed him – ended as he had begun: as the Nazi regime’s chief Jew-baiting rabble-rouser. The thug publisher of a semi-pornographic weekly, Der Stürmer (The Attacker), Streicher’s rag had, since 1933, consistently demanded the annihilation and extermination of the Jewish people. On the day of his death, the irony didn’t escape him as he mounted the platform, defiantly yelling “Purim-fest 1946!” But even without this last hateful taunt, some there must have heard the echoing voice of the legendary Jewish Queen Esther herself, as she had spoken so long, long ago, in saving her people from destruction. “If it please the king… let Haman’s ten sons be hanged upon the gallows.”