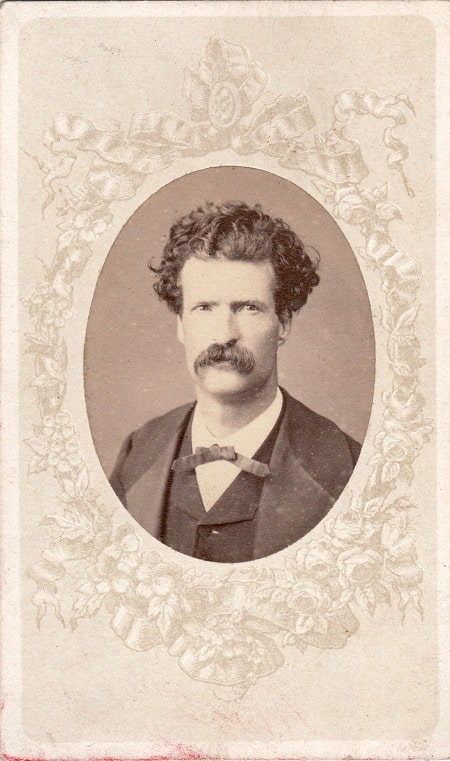 Samuel L. Clemens, who was reborn as Mark Twain at age 27 and two months, crawled miraculously at birth as a staff reporter for the eight-page Virginia City Territorial Enterprise, in Nevada,  and took his first steps four years later, in California, with a comic account of a frog jumping contest. But it wasn’t until he managed to hitch a ride on a pleasure trip to the Holy Land, in 1867, that he was really up and running. Until the young humorist stepped aboard the steamer Quaker City, neither he, nor anyone else, yet imagined how this trip would win him the world.  The idea, as Twain saw it, was that a Californian newspaper, having paid his passage, would continue to pay him $20 each for a total of 50 articles about his trip to Europe and the Holy Land. Of course, a great many Americans had traveled to Europe, but very, very few to the Holy Land – so the coast was clear for the fledgling Twain to train his new eyes not just on the Old World, but the oldest, and report what he saw. This would prove, to both his co-excursionists and his readers, to be significantly different than expected….

In fact, such was the effect of Twain’s trip to the Holy Land that the 150th anniversary of his journey to Jerusalem is being celebrated, in upcoming weeks, with the airing on American Public Broadcasting of the award-winning documentary Mark Twain’s Journey to Jerusalem: Dreamland.

Twain Travels to the Holy Land: American Literature, Travel Writing, and International Tourism Would Never Be the Same

Of all the lands there are for dismal scenery, I think Palestine must be the prince…  Renowned Jerusalem itself, the stateliest name in history, has lost all its ancient grandeur, and is become a pauper village; the riches of Solomon are no longer there to compel the admiration of visiting Oriental queens; the wonderful temple which was the pride and the glory of Israel, is gone… Palestine is desolate and unlovely. And why should it be otherwise?… Palestine is no more of this work-day world. It is sacred to poetry and tradition — it is dream-land. – Mark Twain, Innocents Abroad, Chapter 56

What mid-19th-century Americans imagined about the Holy Land was the result, mostly, of the few missionaries, pilgrims and tourists; archaeologists and Bible scholars; settlers and consular officers – who braved the long, hard trip to far-off Palestine. Although their motives in visiting were different, all were influenced by the then prevalent romantic visions of an exotic land, and expected, for their trouble, to be filled with strong emotion and spiritual exaltation when arriving at their fabled destinations. Twain, however, looked upon Palestine – the rocks, dust, and aridness; the badly paved, crooked and narrow streets; the poor, lame and the Lepers – and, with a modern, unsparing, snap-shot-like eye, captured the reality of the dismal scene, and too, his fellow-travelers. Neither the Holy Land – or Americans abroad – or travel literature –  would ever be the same again. 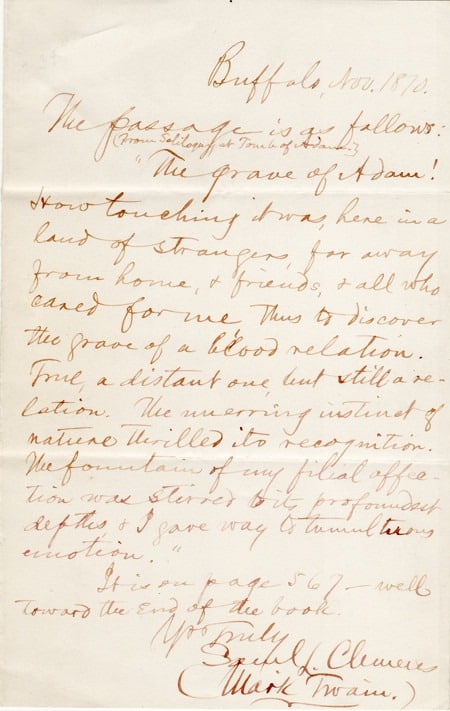 From "Innocents Abroad," Mark Twain's famous soliloquy at the Tomb of Adam in the holy land. Shapell Manuscript Collection.

What had been the innocent imaginings of Twain’s co-excursionists, as depicted in charming books on their bookshelves back home, would give way before the unvarnished experience of his seeing for himself. “Palestine,”  Twain avowed, “sits in sackcloth and ashes.” And Jerusalem, the “stateliest name in history”,  was in reality a village, so small he could circle it – all “rags, wretchedness, poverty and dirt” – in a hour. That storied city, he concluded, was “mournful, and dreary, and lifeless” and for the life of him, he would not choose to live there.

The 58 letters Twain wrote to the San Francisco Alta California (and the New York Tribune and New York Herald, too), were so warmly received by the public, that they became Twain’s next book project: Twain compiled, edited, enhanced, and embellished the letters, which were published two years later as Innocents Abroad. It was to be, of all his works, that which sold best during his lifetime. It was realistic, but comic;  irreverent, yet humane; and it introduced to the world one of the greatest characters ever invented – Mark Twain.

Typical, then, of Twain’s gimlet-eye was his view of the crocodile tears shed by his fellow pilgrims at the Biblical Holy Land. Where they would see a kind of fairy land, he could see a howling wilderness. Except, by and large, for the hill at Calvary, where he was genuinely moved, he suspected most of the sacred spots of being “imaginary holy places.” Ancient sites especially risked his lampoonery. In this famous passage from Innocents Abroad, he delivers with pointed sarcasm a soliloquy at the Tomb of Adam in the Holy Land:

The grave of Adam! How touching it was, here in a land of strangers, far away from home, & friends, & all who cared for me thus to discover the grave of a blood relation. True, a distant one, but still a relation.  The unerring instinct of nature thrilled in recognition.  The fountain of my filial affection was stirred to its profoundest depths, & I gave way to tumultuous emotion

But the voyage to the Holy Land did more than mark Twain as a thrilling new voice. It also introduced him to the love of his life, Livy – to whom he dedicated this special two-volume edition of Innocents Abroad, bound in morocco and gilt, each volume inscribed identically: “To Livy L. Clemens, With the love of S.L. Clemens.” Writing in his Autobiography in 1906, he recalled how “I saw her first in the form of an ivory miniature in her brother Charley’s stateroom in the steamer ‘Quaker City’, in the Bay of Smyrna, in the summer of 1867, when she was in her twenty-second year….” rare 1879 Tauchnitz edition of "Innocents Abroad" inscribed by Twain to his wife, "with the love of S.L. Clemens." Shapell Manuscript Collection.

What happened next, after seeing her photo, was this: a month after returning from the Holy Land voyage, Twain, 33, met Olivia, 22,  in December 1867; started proposing, September 1868; got engaged, February 1869; and wed, February 1870. But what would be thirty-four years of happy marriage could, for Twain, only begin when he felt himself rich enough to give Livy a comfortable home. This he accomplished by publishing Innocents Abroad – and by setting out on a forty-one city lecture tour to promote the book. The tour, which like most things Twain did since making his boozy way up the gangplank of the Quaker City in June, 1867, was famous.

In “The American Vandal Abroad” lectures, Twain both satirized and celebrated his none-too-refined journeying countrymen.  As incorrigible relic collectors, they could pillage the very shrines they had journeyed to venerate; but as innocents, they would find their horizons infinitely broadened by exposure to foreign lands and cultures. “I am glad the American Vandal goes Abroad,” Twain declared in his lecture. “It does him good. It makes a better man of him. It rubs out a multitude of his old unworthy biases and prejudices.”  And so it did, for Twain, and the millions upon millions of his compatriots who, following in his footsteps, have made the  journey to Jerusalem and, 150 years later,  a much-revitalized dream-land.

Presentation Copy of the Tauchnitz two-volume edition of Innocents Abroad, inscribed (twice; in each volume) by Clemens to his wife, “To Livy L. Clemens, With the love of S.L. Clemens.”   Leipzig, 1879. Two volumes, octavo, period full pebbled red morocco, decorative gilt borders, spines gilt, patterned endpapers, all edges gilt. First Tauchnitz Edition, with a prefatory note by Twain written for this edition. Volumes inscribed by Twain to his wife are exceedingly rare

Autograph Quotation Signed (twice: as “Samuel L. Clemens” and “Mark Twain”), being the “Soliloquy at Tomb of Adam” from page 567 of the Innocents Abroad; 1 page, octavo, Buffalo, November (no day), 1870. One word here is at variance with the published version, viz., Clemens refers to “the grave of Adam” whereas the actual text reads “tomb of Adam.”