A thousand days in office, and President Kennedy was worried. What with the backlash from Civil Rights sure to cost him the South, he would need Texas again, absolutely, to win in ’64 – and by more than the 46,000 vote margin he’d squeaked by with in ’60. He’d have to go down there, meet with rich donors, and straighten out, if he could, the conservative-liberal split in the state’s Democratic Party. The plan, then, was to fly to Texas, make half a dozen appearances, and end the visit, on the night of November 22nd, in Austin, at a $100 a plate dinner for the State Democratic Executive Committee. On the afternoon of the 22nd, however, at half past mid-day, as Kennedy rode with his wife in an open limousine in Dallas, waving – three shots rang out from a nearby building. One struck the President in the upper back and exited from his neck; another entered the rear of his head, exiting and shattering the right side of his skull. He was, effectively, dead at that moment, although death would not be pronounced until an hour later – by which time 68% of all Americans had heard the news: the President had been assassinated. Everything, it seemed, changed: not only had the country lost a beloved young President, but its innocence as well. Suddenly, there was before, and there was after. And in all this terrible tumult, there was now something else: a last thing signed…

7:10 a.m.: As JFK dresses, in his suite at Hotel Texas in Fort Worth, he dons a surgical corset to ease his chronic disc disease. He laces it tightly, then pulls a long elastic bandage over his feet and twists it so that it forms a figure eight. He then slips it up over both legs. Finally, it is adjusted over his hips where it supports the bottom of his torso, while the back brace holds the lower spine rigid.

8:30 a.m.: JFK stands at a window, overlooking a platform where, in a few minutes, he will address a large crowd. He remarks that “if someone wanted to get you, it wouldn’t be very difficult.”

It is at this point – within, approximately, a 10 minute window – that a chambermaid, Jan White, encounters the President and his Secret Service detail in a hallway. She asks him to sign a newspaper she has with her. Kennedy reads her name on her name tag, and inscribes the photograph of himself and Mrs. Kennedy, on the front page of the November 22, 1963, Dallas Morning News, “To Jan White – John Kennedy.”

9:20 a.m.: The anticipation that Mrs. Kennedy may appear is tremendous. When she does, a few minutes later, 2,000 businessmen and their wives leap to their feet, cheering. The President then addresses the crowd. “Two years ago I introduced myself in Paris as the man who had accompanied Mrs. Kennedy to Paris,” he quips. “I’m getting somewhat the same sensation as I travel around Texas.” Pandemonium. “Nobody wonders what Lyndon and I wear –” he says, grinning. 10:30 a.m.: Back in the hotel suite, JFK is shown a Dallas newspaper carrying a political advertisement accusing him of treason. “We’re going into nut country today,” he tells an aide. Prowling the room, he remarks to no one in particular, for the second time that morning, that “It would not be a very difficult job to shoot the president of the United States. All you’d have to do is get up in a high building with a high-powered rifle with a telescopic sight, and there’s nothing anybody can do.”

10:40 a.m.: JFK’s motorcade leaves the Texas Hotel for Carswell Air Force Base in Fort Worth in order to make the short flight to Dallas.  There will be 36 people aboard Air Force One – not including the crew.

11:17 a.m.: Having been delayed by a spontaneous show of support from Air Force personnel, Air Force One now takes off for Dallas.  During the flight JFK reviews the morning’s Intelligence Checklist.  A CIA analyst has included in this report a copy of the bullfight poem that JFK recited on October 16, 1962, just after he was told about the missiles in Cuba:

11:40 a.m.:Air Force One lands at Love Field in Dallas. A large crowd waits to greet the President; he is pleased to see so large a turnout. He deplanes a few minutes later

12:29 p.m.: Crossing Dealy Plaza and heading for an overpass, the crowds are so enthusiastic that Governor Connelly’s wife, in one of the jump seats, says to JFK that, “they can’t make you believe now that there are not some in Dallas who love and appreciate you, can they?” Waving to the crowd, he replies, smiling, “No, they sure can’t.”

12:30 p.m.: The first shot – and then the second, which hits the President. A bullet enters the back of his neck, bruises a lung, rips his windpipe, and exits at his throat. His back brace holds him erect, unable to fall forward. 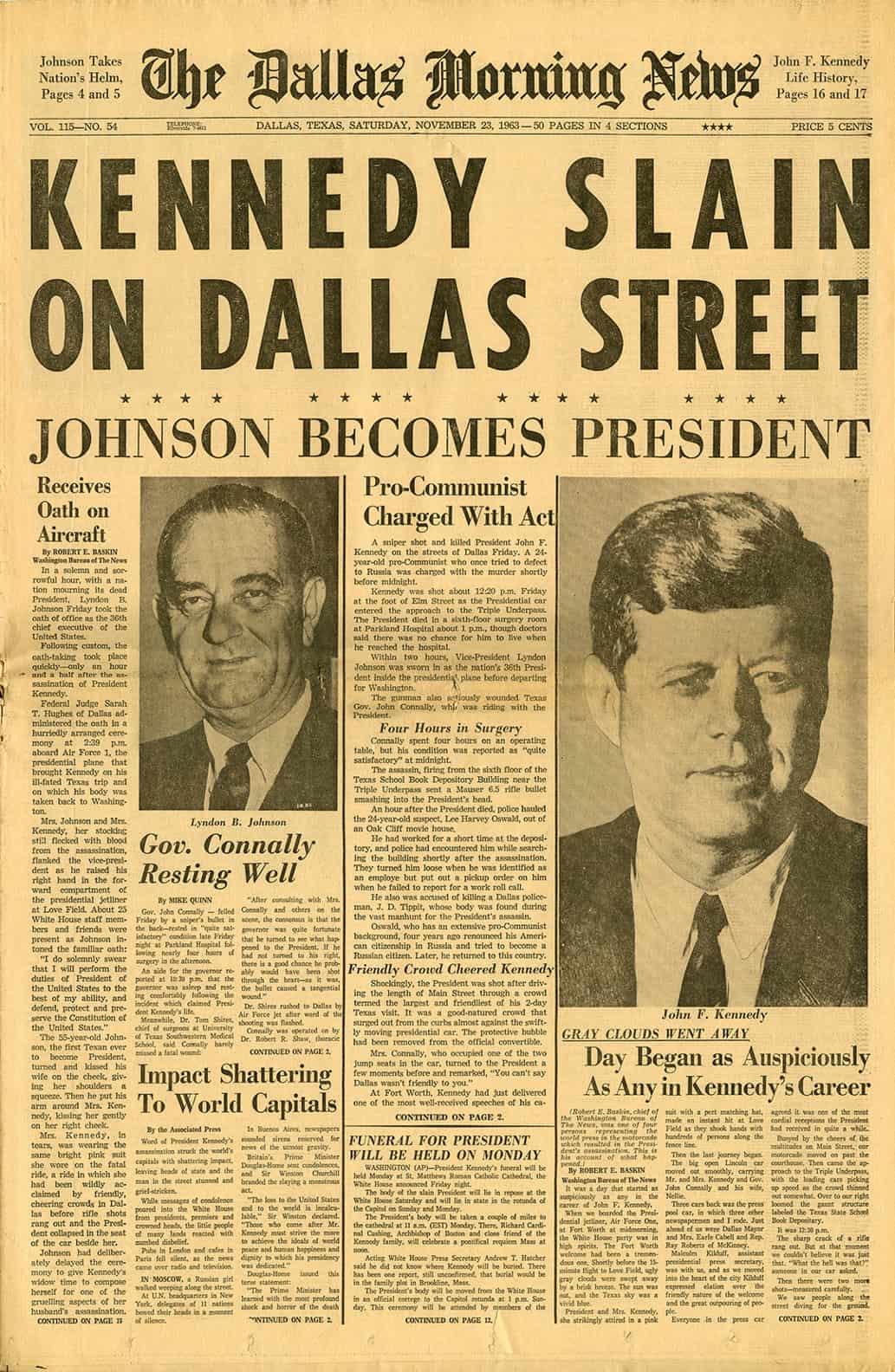 It seems unlikely that Kennedy – at the breakfast; on the very short flight from Fort Worth to Dallas;  working the fence at Love Field; or in the motorcade – had many (or any) opportunities to sign letters or give autographs after he inscribed this newspaper. Of all the things he might have autographed last, in fact, a newspaper headlining his visit would seem fitting. It told the story, right up to the minute, of his trip. Why he went – “Split State Party Continues Feuds”, “Yarborough Snubs LBJ”; how it was going – “Storm of Political Controversy Swirls Around Kennedy on Visit; what was coming – “Love Field Braces for Thousands”. (And, in a prophetic box at bottom, it also foretold the end: a diagram showed the motorcade’s route by the “Triple Underpass.”) Then too, that the most powerful man in the world, whose 1,000 day presidency was a symbol of transformative promise, could have written his last words to a woman who cleaned hotel rooms, was a gesture, and an irony, that Kennedy may well have appreciated most. 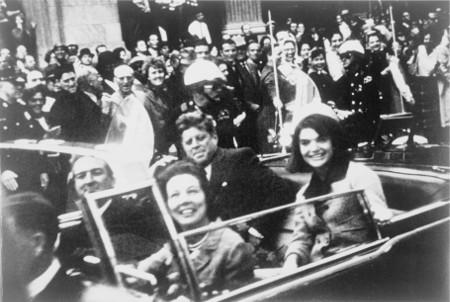 Newspaper, Signed, as President, being the front page of the November 22, 1963 (morning) edition of the Dallas Morning News; 1 p., elephant folio [app. 36 by 36 inches], signed in Fort Worth, Texas, though datelined, in print, Dallas. Inscribed in blue ballpoint – across a photo of himself and Mrs. Kennedy in Texas – to a Fort Worth hotel chambermaid, Jan White. Of extreme rarity on this day and quite possibly, a last – if not the last – thing JFK signed. 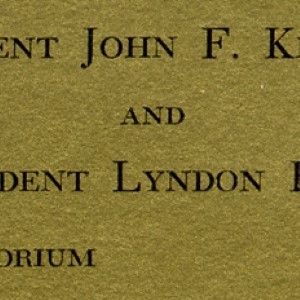 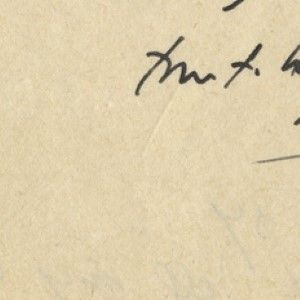 President John F. Kennedy “On the Edge of the New Frontier,” Wonders What The Next Four Years Will Bring