If you know the names Susie Hodder, Carrie Fulton Phillips, Grace Cross, Nan Britton, Rosa Hoyle, Augusta Cole, Ruby Randall, Maize Haywood, Blossom Jones, or even Miss Allicott, you know way too much about the 29th President, Warren G. Harding, than you ought.  Mrs. Harding, his wife of thirty-two years – who married the handsome Harding for, she claimed, his brains – took great pains not to know those names, and to hear tell, moved heaven and earth to make sure you did not either. Somehow, blackmail was paid, child support sent, appointments made, favors granted, vacations provided – and jobs found. Who all did the paying, sending, and bidding is not, however, the focus here, but for one man: President Harding himself. Here he tries to get his mistress, and likely the mother of his child, a job.

Depending upon one’s point of view, the absence of any extant letters in an affair as epistolary as that between President Harding and Nan Britton, is taken to prove opposite points. She says she tore up all the “heart-revealments” which proved their love because they were too intimate to be risked. Her detractors say no letters ever existed because there was no affair. It would appear, then, that this transcription of an original letter from Harding about Miss Britton’s needs and desires, is as much evidence as is known. Whether it proves conclusively that Harding had an affair with the infatuated young woman and fathered a child with her – as she so famously alleged in her sensational book, The President’s Daughter is open, by degrees, to interpretation. 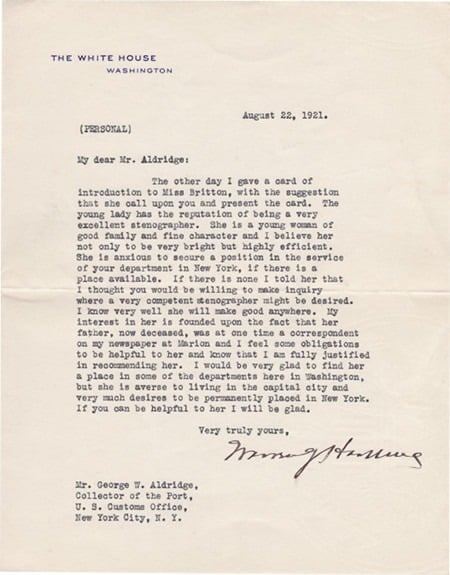 Warren G. Harding tries to get a job for his alleged mistress, Nan Britton.
This manuscript is no longer part of the Shapell Manunscript Collection.

The other day I gave a card of introduction to Miss Britton, with the suggestion that she call upon you and present the card. The young lady has the reputation of being a very excellent stenographer.  She is a young woman of good family and fine character and I believe her not only to be very bright but highly efficient.  She is anxious to secure a position in the service of your department in New York, if there is a place available.  If there is none I told her that I thought you would be willing to make inquiry where a very competent stenographer might be desired. I know very well she will make good anywhere.  My interest in her is founded upon the fact that her father, now deceased, was at one time a correspondent on my newspaper at Marion and I feel some obligations to be helpful to her and know that I am fully justified in recommending her. I would be very glad to find her a place in some of the departments here in Washington, but she is averse to living in the capital city and very much desires to be permanently placed in New York.  If you can be helpful to her I will be glad.

[with Harding’s card]
The President
My Dear Aldridge:
This will be presented by Miss Britton.
Warren G. Harding

Harding did have a well-documented affair with another young woman from Marion, Ohio, however: Carrie Fulton Phillips. It began before his election to the Senate and ended with his presidency – albeit Mrs. Phillips was out of the country for long stretches of time. Nan Britton’s affair, however, was made public only with, and by, the publication of her book, published two years after Harding’s death. As for Carrie Phillips and Harding’s 15 year affair, some 1000 pages of his love letters to her – intimate, impassioned, erotic – are finally, having been sealed at the Library of Congress for a half century, being opened to the public, via the internet, on July 29th. Look them up: you’ll be surprised.

NAN BRITTON. 1896 – 1991. Self-proclaimed much publicized mistress of Warren Harding, and the mother of his only child, Elizabeth Ann. Her 1927 book, The President’s Daughter, negatively effected Harding’s reputation.

Mother’s Day: “All That I am or Hope Ever to be I Get From My Mother” – Abraham Lincoln