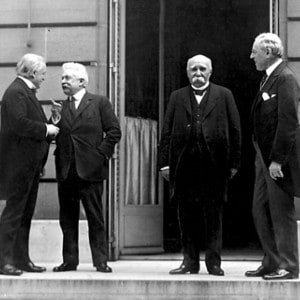 Exactly 100 years ago today, on June 28, 1919, the Treaty of Versailles, the primary treaty which officially ended World War I, was signed by Germany and the Allies. President Woodrow Wilson was instrumental in negotiating the treaty, as well as in conceiving of the League of Nations, the intergovernmental organization meant to maintain world peace. The United States Congress, which was growing increasingly isolationist, had no interest in ceding power to join the League of Nations, and ultimately refused to ratify the treaty.

These two letters by Wilson, just a few years apart, are strikingly different in tone. In the first, Wilson is desperately mounting the campaign to garner Republican votes in favor of the treaty. In the second, an ailing former President Wilson, explains that he cannot read or speak too much of the war because he is “too much affected and upset by it.”