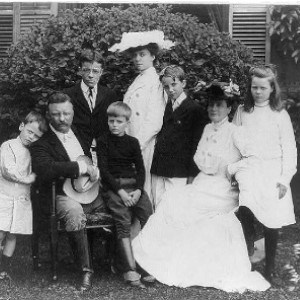 Theodore Roosevelt with his wife and children, taken by the Pach Brothers, July 13, 1903, Library of Congress
June 20, 2021
Story

Despite his stature as American royalty of the Oyster Bay Roosevelt clan, the famed commander of the Rough Riders, an avid conservationist and outdoorsman, and, of course, President of the United States, Theodore Roosevelt cherished one aspect of his life above all others: fatherhood. Whether it was getting on the floor and playing with his children, indulging their antics and pets in the White House, or mourning his youngest son, Quentin, Theodore Roosevelt’s characteristic boundless energy was especially reserved for his children. In fact, in 1919, the year he died, a collection of Roosevelt’s letters to his children was published in one volume, tracing the letters he wrote to them when they were small children through their lives into adulthood, revealing a devoted father whose mind and heart was always focused on his children. Happy Father’s Day.