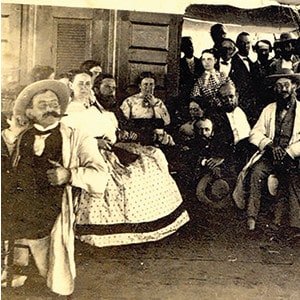 “Not So Innocent Abroad” – Jewish Review of Books

Diane Cole describes her experience visiting “the remarkable exhibit ‘ark Twain and the Holy Land, on display at the New-York Historical Society until February 2, 2020. It celebrates the 150th anniversary of the 1869 publication of Twain’s second book, The Innocents Abroad, or The New Pilgrim’s Progress, the author’s wry-eyed travelogue of the five-and-a-half-month luxury steamship cruise that would carry him and his fellow shipmates across the Atlantic Ocean, through the Mediterranean Sea, and on to its ultimate destination, the Holy Land.”

“Although relatively few readers today would rank this volume [Innocents Abroad] as their favorite among Twain’s works—that honor would more likely go to The Adventures of Huckleberry Finn, Life on the Mississippi, or The Adventures of Tom Sawyer—it was, in fact, his bestselling book over the course of his lifetime and remains one of the bestselling travel books of all time. In achieving literary fame so early in his career—his only previous book was The Celebrated Jumping Frog of Calaveras County, and Other Sketches—Twain jumped onto his own trajectory of authorial celebrity, his name (or pen name, his birth name being Samuel Langhorne Clemens) recognized throughout the world.” – Diane Cole, Jewish Review of Books