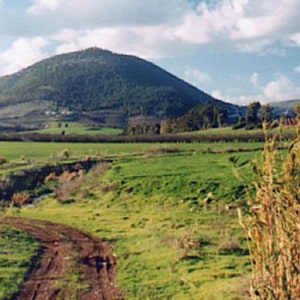 Today’s entry from Twain might find Star Wars fans momentarily confused and smiling. At 7:30am, the Quaker City group broke camp and “galloped across the Plain of Esdraelon to Endor…. the fierce, ragged, dirty inhabitants swarmed.”

The Plains of Esdraelon are today more commonly called the Jezreel Valley, and the local pronunciation and modern spelling of Endor, is Ein Dor, now a kibbutz. Biblical references to the Jezreel Valley, where Ein Dor is located, include major battle scenes. In Christian eschatology, part of this valley is to be the site of a great end of days battle between good and evil – perhaps another similarity to not be lost on Star Wars fans, as Endor was the location of the great battle between the light and dark sides of the Force.

But returning to Twain’s own epic adventures, he cannot help but repeatedly note how “rusty” and “nasty” the local conditions are throughout his journal. Though familiar through the bible, The Holy Land seemed to appear like another world to Twain, with it’s drastically foreign culture, extreme topography, and unusual customs; including women with tattooed faces, which he also notes more than once in his notes.

Sept. 21 – …galloped across the Plain of Esdraelon to Endor

the rustiest of all, almost – a few nasty mud cabins, – many caves & holes in the hill from which the fierce, ragged, dirty inhabitants swarmed. Pop. 250.

…. Endor is a fit place for a witch…. Next, to Nain… still smaller town…. place shown where corpse was passing through city wall when Chirst resurrected it.

Shunem,… where woman built shanty on wall for Elisha & he raised her dead son.

Next to Ancient Ruined Castle

celebrated in the Crusades… where Napoleon won a splendid victory over the Syrians (Turks).

on the hill, where Ahab King of Judah lived in splendor with his awful heifer Jezebel…

Where Gideon slipped up on the Midianites & Amalekites with his 300 who lapped like dogs….

This Esdraelon is called the battle-field of the nations. 11 separate and distinct nations have fought in it…. Assyrians & Persians, the Jews & Gentiles, Crusaders & Saracens, Egyptians, Turks, Arabs, and Franks….

El Genin, where we are camped.