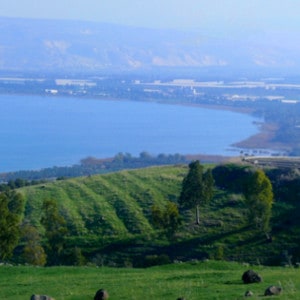 September 19th was a busy and full day for Mark Twain in the Holy Land. Rising at 7:00am, he and his travel companions arrived to Joseph’s Pit by 10:00am. This site is fabled to be that where Joseph’s brother’s stripped him of his multicolored coat and sold him to merchants;

“And there it will remain until the next detachment of image-breakers and tomb-desecrators arrives from the Quaker City excursion, and they will infallibly dig it up and carry it away with them,” Twain lamented in Innocents Abroad. The same pit still serves as a tourist destination in Emek Dotan.

It’s notable that in his journal, Twain sums up the group’s experience of attempting to sail the Sea of Galilee as “Tried to get a boat and didn’t.” This incident is later developed in Innocents Abroad, describing the pious Quaker City excursionists attempting to haggle with a sailor, who, offended at being rebuffed for his asking price, sailed off and did not return;

“Well, there was nothing to do but just submit and forego the privilege of voyaging on Gennesaret,” Twain lamented, “after coming half around the globe to taste that pleasure.” With no other boats nearby, the pilgrims mounted their horses and road to Magdala (near the present-day town of Migdal). “Magdala is not a beautiful place,” Twain observed. “It is thoroughly ugly, and cramped, squalid, uncomfortable, and filthy.” There, they visited one notable dwelling: a ruin that was rumored to be the home of St. Mary Magdalene. After Twain’s companions collected parts of the front wall as souvenirs, they continued to Tiberias where they spent the night.

Sept. 19 – Left our cap by he Waters of Merom at 7AM. The Arabs threw stones into the camp last night and tried to stampede the horses.

…came in site of the

where his brethren threw him. Then over a horrible rocky, barren desert (like Nevada,) skulls with scattering goats & shepherds… & past

from which Christ sent his disciples in a boat, after the miracle of 5 loaves & 2 fishes….

We descended to the sea at

Tried to get a boat and didn’t.

…. for 300 years it was the metropolis of the Jews in Palestine. It has been the abiding place of many famous and learned Jewish rabbins.

2 miles below are mentioned by Pliny.

We have seen no country between here & Damascus capable of supporting any such populations as one gathers from the Bible. The people of this region in the Bible were just as they are now – ignorant, depraved, susperstitious, dirty, lousy, thieving vagabonds.