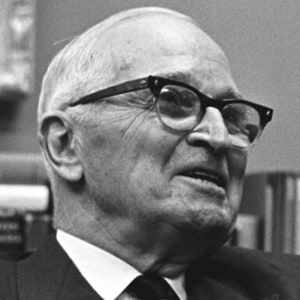 Harry Truman was “one tough son-of-a-bitch of a man,” according to General Harry Vaughan. Vaughan would know. He served alongside Truman in France during WWI and also in the White House. But Truman had a vulnerable side, too. These seven letters, which span the period between Truman’s final days as president in January 1953 and the domestic and international turmoil of the early 1960s, reveal an unknown personal side to Truman. The letters were all written to Dean Acheson, Truman’s trusted Secretary of State. The two developed a close friendship during their White House years, and maintained a regular correspondence during Truman’s post-presidential years. In May 1971, more than eighteen years and scores of letters later, Acheson wrote his final letter to Truman, wishing his friend a happy eighty-seventh birthday. Truman would pass away the following year.

The modest, straight-talking Harry Truman took on the “terrible responsibilities” of the presidency after Franklin Roosevelt’s death in April 1945. It was baptism by fire for Truman. He had to navigate the final months of WWII and make the decision to use atomic weapons against Japan. After narrowly defeating Thomas Dewey in the 1948 election, Truman chose not to run for reelection in 1952. His approval rating was low and he withdrew his candidacy after losing the New Hampshire primary. Truman’s post-presidential years were marked by financial hardship, which inspired Congress to finally pass legislation to provide a pension for past presidents. Truman also faithfully campaigned for Democratic candidates.

These letters clearly communicate one element of Truman’s personal life – his love for history. He found great value in applying the lessons of the past to the problems of the present. He was an expert in presidential history, and referred to past presidents often in these letters. The writer and humorist Mark Twain is usually credited with the clever observation that “history doesn’t repeat itself, but it often rhymes.” These Truman letters illustrate the rhyming nature of history. They touch on topics – such as racial tension, conflict on the Korean Peninsula, sour relations with Russia, biased newspaper coverage, and partisan politics – that are still relevant today, though in different contexts.

Truman continually feuded with the Kansas City Star for its pro-Republican coverage and often derided columnists who wrote unflattering accounts of his presidency. He almost certainly would have used the phrase “fake news” if it was popular at the time. Instead, he went as far as to call many in the media “prostitutes of the mind,” in a famous letter from December 1955.

While bemoaning negative newspaper coverage, Truman, less than a year after leaving office in 1953, wrote of recent editorials that “if it weren’t tragic it would be the best comedy in history… I’ve read the press on Washington, Jefferson, Adams, Jackson, Lincoln, Cleveland, Teddy R., Wilson and F.D.R. and there seems to me to be no parallel” In another letter, Truman reviews his presidency and compares himself to Andrew Jackson, Abraham Lincoln, and Grover Cleveland – presidents who took decisive action and employed the full power of the Executive to handle domestic and international crises. He also compliments his good friend Acheson for being an extraordinary secretary of state, and compares Acheson to Thomas Jefferson and William Seward, who served George Washington and Abraham Lincoln, respectively.

Truman wrote in his memoirs, “My debt to history is one which cannot be calculated. I know of no other motivation which so accounts for my awakening interest as a young lad in the principles of leadership and government.” With little formal education, Truman was self-taught from voracious reading: in 1962 he wrote to Acheson about his childhood experiences reading books from the library: “Our public library in Independence had about three or four thousand volumes, including the ten encyclopedias! Believe it or not I read ‘em all… Maybe I was a damphool [damn fool],” Truman noted, “but it served me well when my terrible trial came.”

Learn More About Harry Truman After His Presidency

Read more in this selection of post-presidential correspondence between Truman and Acheson, plus discover other great blogs from Shapell, including Titanic Victims – Archibald Willingham Butt, Anne Frank Family Album at the Anne Frank Fonds, and George Cortelyou.