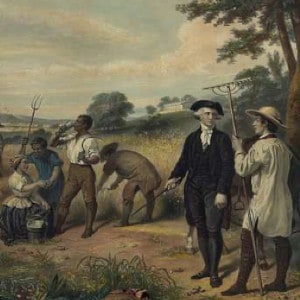 “It will not be doubted that with reference either to individual or national welfare, agriculture is of primary importance. In proportion as nations advance in population and other circumstances of maturity this truth becomes more apparent, and renders the cultivation of the soil more and more an object of public patronage.” –President George Washington, Eighth Annual Address to Congress, December 7th, 1796 [1]

Composting, food security, farming, agrarian experimentation, and barn innovation are not the first concepts that are associated with George Washington. And yet, the man who had commanded the Continental Army, who crossed the Delaware to defeat the British, and who went on to serve as America’s first president, was consumed by these ideas later in life. His agrarian pursuits were actually the achievements of which he was most proud.  Lord Byron (and many others) eulogized George Washington as “the Cincinnatus of the West.” Like the Roman statesman, Washington had the opportunity to seize complete power, and yet relinquished his command of the Continental Army, insisted on a presidency instead of a monarchy, voluntarily retiring after two terms, and, like Cincinnatus, returned to his farm after serving his country.

Washington’s agricultural pursuits reflect the shift in revolutionary America. Like many Virginians, tobacco was his cash crop (it even functioned as currency in colonial Virginia – taxes were paid in pounds of tobacco), as it was in high demand in Europe. The colonists would ship the tobacco to England, where it would be sold by merchants in London. Most arrangements meant that the tobacco could be bartered by the colonialists for fine items from Europe and England. But by 1766, Washington understood that tobacco was an unsustainable crop. In addition to being incredibly labor-intensive, tobacco left farmers with very poor soil, as a result of erosion caused by the tobacco plants. Washington himself was in personal debt because of his love of fine imports from Europe and not getting a fair market price for his tobacco. [2] Around then, Washington transitioned from tobacco to grains.

In addition to the value of grains for sustenance, Washington established a distillery at Mt. Vernon shortly after his second presidential term ended in 1797. Whiskey-making was far and away his most profitable business, and by 1799, it was one of the largest distilleries in America. Washington’s pivot from tobacco to grain was emblematic of America’s pivot away from an eroding relationship with both England and America’s natural resources (soil, particularly) and towards self-sufficiency and stewardship of American farmland.

The same quality that existed in Washington that led him to serve his country commanding the Continental Army and as the nation’s first president, led him to experiment with new farming techniques: duty. Washington felt that the responsibility to experiment with new farming techniques rested on the shoulders of the wealthier farmers, who could easily recover from losses. As president, Washington’s longest and most frequent letters were about agricultural reform. [3]

Washington’s main obsession was with soil regeneration, and therefore with manure. In 1785, after retiring to Mount Vernon for the first time following the resigning of his military commission, he sought a farm manager who was “Midas-like” in his ability to “convert every thing he touches into manure, as the first transmutation toward Gold.” [4] Washington, often called America’s “first farmer” left his most prominent mark on what today we would call composting. It’s very possible that Washington built the very first structure in America that was dedicated to compost, what he called the “stercorary.” Archaeologists at Mt. Vernon date the structure to approximately 1787. [5] Though composting is common practice in our era, in Washington’s, it was a novel idea in the West,  just beginning to be written about by English agronomists, and he was a pioneer in championing it and experimenting with its benefits.

Many of the concerns that occupy environmentalists and agronomists that have crossed into public consciousness such as soil health and sustainability are those that were raised by Washington at Mt Vernon two hundred years ago. To Washington, the success of America relied on the scientific study and sustainable harvest of its natural resources.