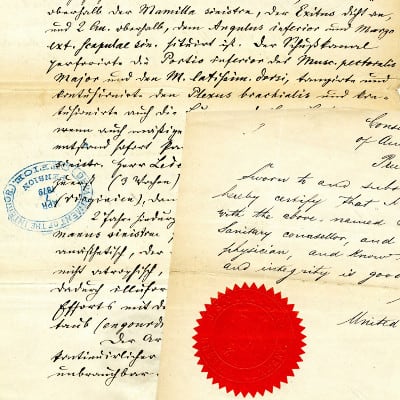 Department of the Interior. Bureau of Pensions. Case Files of Approved Pension Applications of Veterans Who Served in the Army and Navy Mainly in the Civil War and The War With Spain ("Civil War and Later Survivors' Certificates"): Nos. SC 9,487-999,999, 1861-1934. Textual Records, ARC Identifier no. 300019: Records of the Department of Veterans Affairs, 1773-2007, Record Group 15. National Archives and Records Administration, National Archives Building, Washington, DC.
August 13, 2020
Story

With his unique skill set and being a professor of English and German, Jim Simmons’ contributions to the Shapell Roster research have been essential in understanding Jewish Civil War soldiers’ history.

Jim Simmons grew up in Cumberland, Maryland, a city with a substantial German-speaking population. When Jim’s grandmother was growing up in Cumberland in the 1890s, all of her classes, except for English, were taught in German. When it was time for Jim to go to college, he attended Davis and Elkins College, across the state line in Elkins, West Virginia, where he majored in German. He continued his education in North Dakota, where he obtained a Masters in German and later a PhD in English.

Dr. Simmons spent his career teaching English at the college level in North Dakota, South Dakota, Illinois, and Mississippi. He is currently retired and living in Fargo, North Dakota, where he teaches ethics, cheers on the local junior hockey team, does a great deal of reading (in English and German), and volunteers for the Shapell Roster translating German documents.

Most of the documents that Jim has translated for the Roster are from the pension records of soldiers. He has translated letters written by German doctors attesting to the medical condition of Civil War veterans, and court documents supporting the claims of a widow who returned to Germany. Without his help translating, the Shapell Roster research team would not understand the meaning of the documents we have acquired written in the unique German script used before WWII.

Thank you, Jim Simmons, for sharing your time, knowledge, and skill with the Shapell Roster.