Add to History Board Share Print
Back to About Shapell
Publication Date: March 1, 1995
By Benjamin Shapell
Originally published in INSIDER'S REPORT, March, 1995. Theodore Roosevelt campaigns for the Presidency in 1904. AP Photo.

Americans have a love affair with the car, from the common man all the way up to the President of the United States. So it really wasn’t any surprise that President Clinton jumped on the occasion of the 30th anniversary of the Mustang last year to proudly show off his very own sporty Ford. Being the first “Baby Boomer” President, Clinton has a natural attachment to the Ford Mustang, which is the first car that the baby boom generation can call its very own. Born in 1964, a year that defined Clinton and his generation, the Mustang came on the scene right after President Kennedy was assassinated, during the same year that the Civil Rights Act was passed, the Free Speech Movement began at Berkeley, the Vietnam War began in earnest. “Goldfinger” and “Dr. Strangelove” were on the big screen and Elvis was king.

Not every President has been so enthusiastic about the car, however.  In 1905, Theodore Roosevelt wrote to a Charles Hughes in England, “Motor cars are a trial, aren’t they?  I suppose that ultimately we will get them into their proper place in the scheme of nature…but just at present I regard them as distinct additions to the discomfort of living.”

Roosevelt was speaking from experience – he was the first President to ride in an automobile, having been a passenger in a purple-lined Columbia Electric Victoria on a trip through Hartford, Connecticut, on August 22, 1902.  That little adventure occurred only nine years after the first car was built in America by Charles Duryea and a year before Henry Ford established his car company in Dearborn, Michigan.

T.R. was a pioneer of sorts in the field of transportation.  The Wright Brothers’ first airplane flight took place on December 17, 1903, during Roosevelt’s presidency, and the Rough Rider was the first President to ride in an airplane in 1910 soon after leaving office.  T.R. was also the first President to go down in a submarine when he went aboard the Plunger in 1905 and submerged twenty feet off the coast of Long Island, N.Y. for fifty-five minutes.

Probably the greatest achievement in the area of transportation during T.R.’s presidency was the construction of the Panama Canal.  Aware of the pressing strategic need for a shortcut between the Atlantic and Pacific, Roosevelt himself masterminded the construction of the Canal.  He also visited the engineering masterpiece in 1906, becoming the first President to leave the U.S. during his term in office.  The enthusiastic letter he sent to President Amador of Panama thanking him for a gift became, perhaps, the first letter ever written by an American President on foreign soil.

So if T.R. was such a visionary about the airplane, submarine and the Canal, why was he so blind to the one transportation invention that would most define our country in this century?  After all, T.R. could have led his countrymen in embracing the automobile by riding in one during his 1905 inauguration.  But Roosevelt consciously passed up that opportunity, leaving it to Warren Harding to be the first President to ride in a car during his inauguration in 1921.

Perhaps T.R. just wasn’t psychologically ready for the car to replace the great love of his life – horses.  Being an avid hunter, T.R. had spent some of his happiest times chasing his prey on a horse.  And the great Rough Rider didn’t storm San Juan Hill from the backseat of a Chevy.  The plane, the sub, and the Canal didn’t affect transportation on land as fundamentally as the horseless carriage did, so maybe T.R. was ready to accept only those advancements which didn’t alter his own personal lifestyle.

In fairness to our twenty-sixth President, T.R. did view their “proper place in the scheme of nature,” as he wrote in his 1905 letter.  In fact, T.R. had the foresight to grow and accept, even admire the automobile.  In 1908, an American team won an automobile race from New York to Paris,* and Roosevelt congratulated the crew for “putting America to the front in automobile manufacturing.”

A far more significant development concerning the future of the automobile happened that same year when Henry Ford produced the first Model T.  With the introduction of this cheap, mass-produced car, the automobile moved very quickly from being a novelty to an integral part of American life.  T.R. embraced Ford as a man “…I feel not merely friendliness, but…a very genuine admiration.”

And in a 1916 letter to his friend Henry Fairfield Osborn, Roosevelt gushed, “There is one thing that Beebe ought to have as soon as possible, and that is a Ford car.  It would make the greatest difference in his work…he has to spend an hour at the very best part of the day in getting out to his ordinary hunting grounds…There isn’t anything that would do more for the success of that station than a Ford car.”

Maybe T.R. would have reached his enthusiasm for the car a little quicker if he had been able to read about it in Jules Verne’s 1863 novel “Paris in the Twentieth Century.”  The amazingly prescient manuscript described what Paris would be like in 1960.  Not only did Verne predict the advent of the fax, the electric chair and the computer, but he also described amazing contraptions controlled by steering wheels and gas pedals.  He wrote that “an invisible force with a gas-powered motor made them move.”  But Verne’s publisher was unimpressed with the book, and rejected it.  Verne locked it away in a safe where it stayed until 1989 when the author’s great-grandson re-discovered it.  It’s just now being published.

T.R. did not have the luxury of Verne’s predictions to fall back on, so he had to develop his own vision of the automobile’s place on the road, and in society.  Evidently, it took him a while.  Given President Clinton’s personal affection for his own jalopy and President Roosevelt’s negative attitude towards the car in that wonderful 1905 letter he wrote to Charles Hughes, it’s clear that one President’s love for the car was another President’s nuisance. Perhaps if Clinton could have cruised around with T.R. in his Mustang, the “discomfort of living” the older man felt for the car early on might have given way to an appreciation of riding around in a convertible with the radio blaring and the wind rushing through his hair.

And just to show how far the Presidential auto has come over the years from that first short trip T.R. took around Hartford, Connecticut, in 1902, a new 22-foot – 6-inch-long Cadillac Fleetwood Brougham recently joined the White House fleet.  The new limo has a telephone, a public address system, a stereo and lots of armor. It flies wherever the President goes.  This big car comfortably seats six which means it could probably squeeze through the Panama Canal, as well as a McDonald’s takeout window.

*How can you have an automobile race from New York to Paris?  The drivers raced westward to Alaska.  They and their cars then crossed the Bering Strait by ferry. 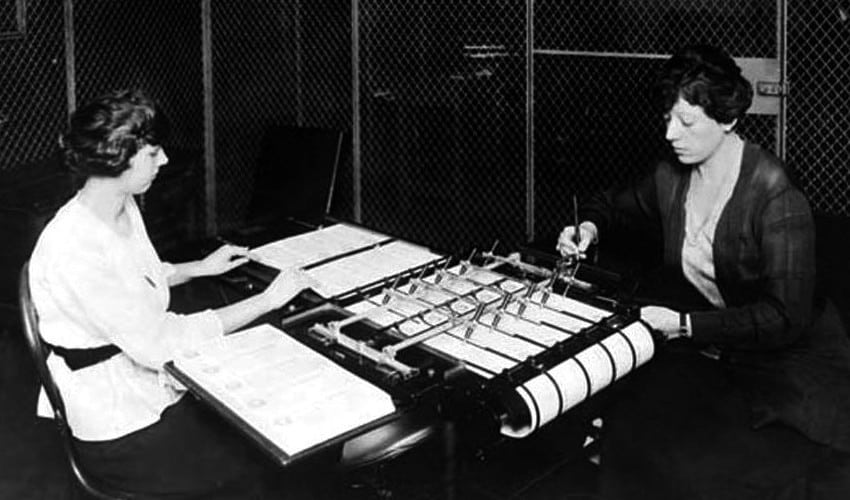