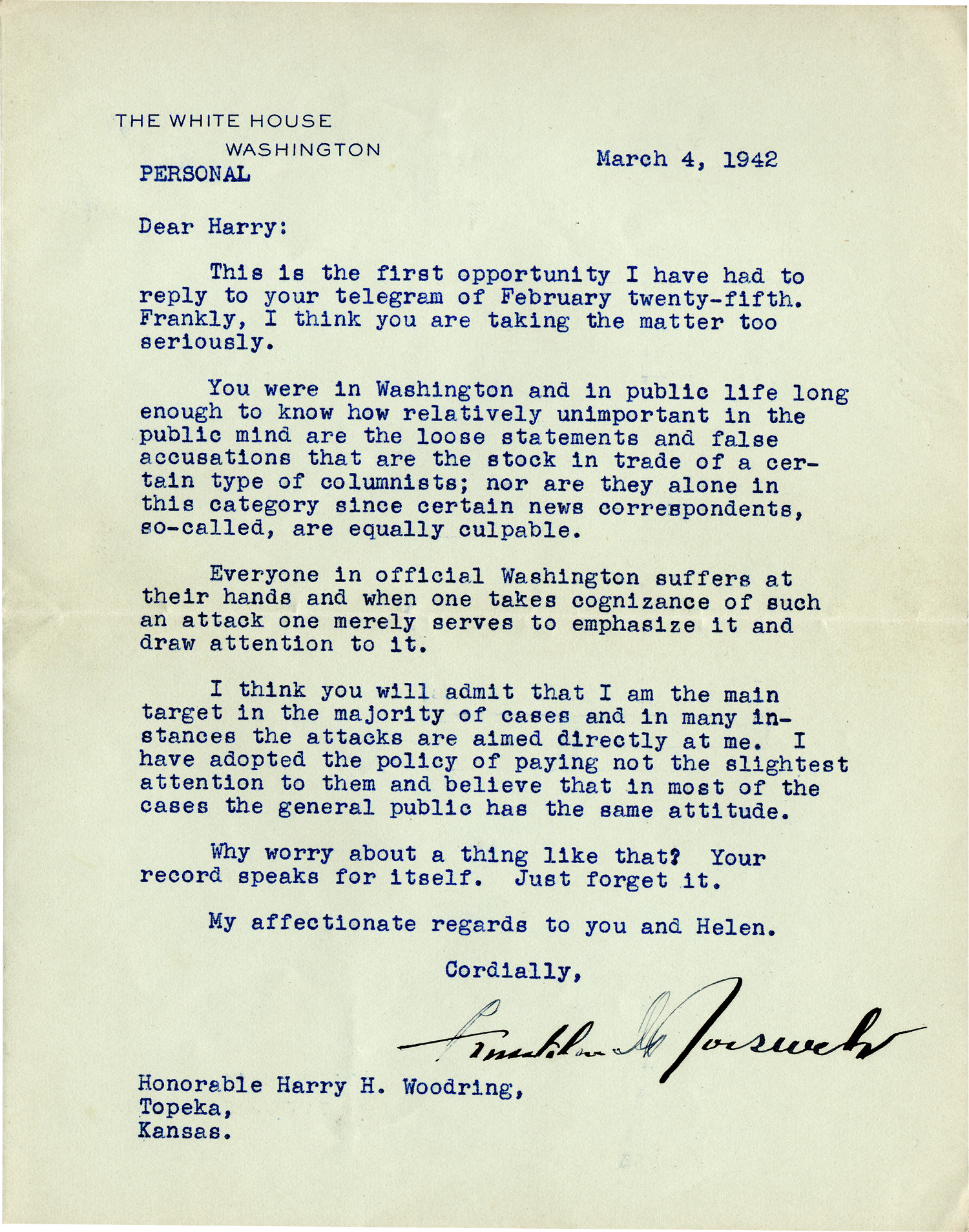 Two months after the attack on Pearl Harbor, many Americans were still searching for answers about how such a shocking and devastating strike could happen on US soil. Former Secretary of War Harry Woodring was an easy scapegoat.

On February 24th, 1942 newspapers across the country ran an edition of the popular syndicated column, “The Washington Merry-Go-Round,” that severely criticized Woodring’s decision-making during his term. The opinion piece, written by Drew Pearson and Robert S. Allen, claimed that FDR’s initial kindness had delayed the firing Woodring early on, which “permitted the War Department to be bogged down by a midwest isolationist, Harry Woodring.” The authors went on to say that Woodring did not believe in having a strong defense, and argued that the national defense was in woefully poor shape because of Woodring’s influence. The day after this column came out, Woodring telegram Roosevelt to complain of the negative coverage.

In response, Roosevelt counsels his friend to let the criticisms roll off his back and reminds Woodring that “loose statements and false accusations” are “the stock in trade of a certain type of columnists” and “news correspondents.” Drew Pearson, in particular, was known for pushing the envelope when it came to reporting. According to a 2015 article in the New Yorker, Pearson’s syndicated column “ran so widely and for so long that its purveyor became a figure in the popular culture.” Still today, “The Washington Merry-Go-Round” continues to run and claims to be America’s longest-running syndicated column. In his letter, Roosevelt reminds Woodring, “I think you will admit that I am the main target in the majority of cases and in many instances the attacks are aimed directly at me.” And indeed, the column in question took more pointed aim at Roosevelt than Woodring. The problem with the U.S. military, according to the column, was not just Woodring’s isolationism, but even more so that Roosevelt lacked the backbone to make tough decisions, like getting rid of Woodring in a timely manner and more forcefully pursuing an armament program.

As president, Roosevelt could certainly understand Woodring’s frustration about slanted news coverage. A common presidential complaint is unfavorable treatment by the press. In fact, Roosevelt’s comments about unscrupulous reporters are quite similar to comments made by Harry Truman more than ten years later (https://www.shapell.org/manuscript/truman-on-republican-newspapers/).

This is the first opportunity I have had to reply to your telegram of February twenty-fifth.  Frankly, I think you are taking the matter too seriously.

You were in Washington and in public life long enough to know how relatively unimportant in the public mind are the loose statements and false accusations that are the stock in trade of a certain type of columnists; nor are they alone in this category since certain news correspondents, so-called, are equally culpable.

Everyone in official Washington suffers at their hands and when one takes cognizance of such an attack one merely serves to emphasize it and draw attention to it.

I think you will admit that I am the main target in the majority of cases and in many instances the attacks are aimed directly at me.  I have adopted the policy of paying not the slightest attention to them and believe that in most of the cases the general public has the same attitude.

Why worry about a thing like that?  Your record speaks for itself.  Just forget it.

My affectionate regards to you and Helen. 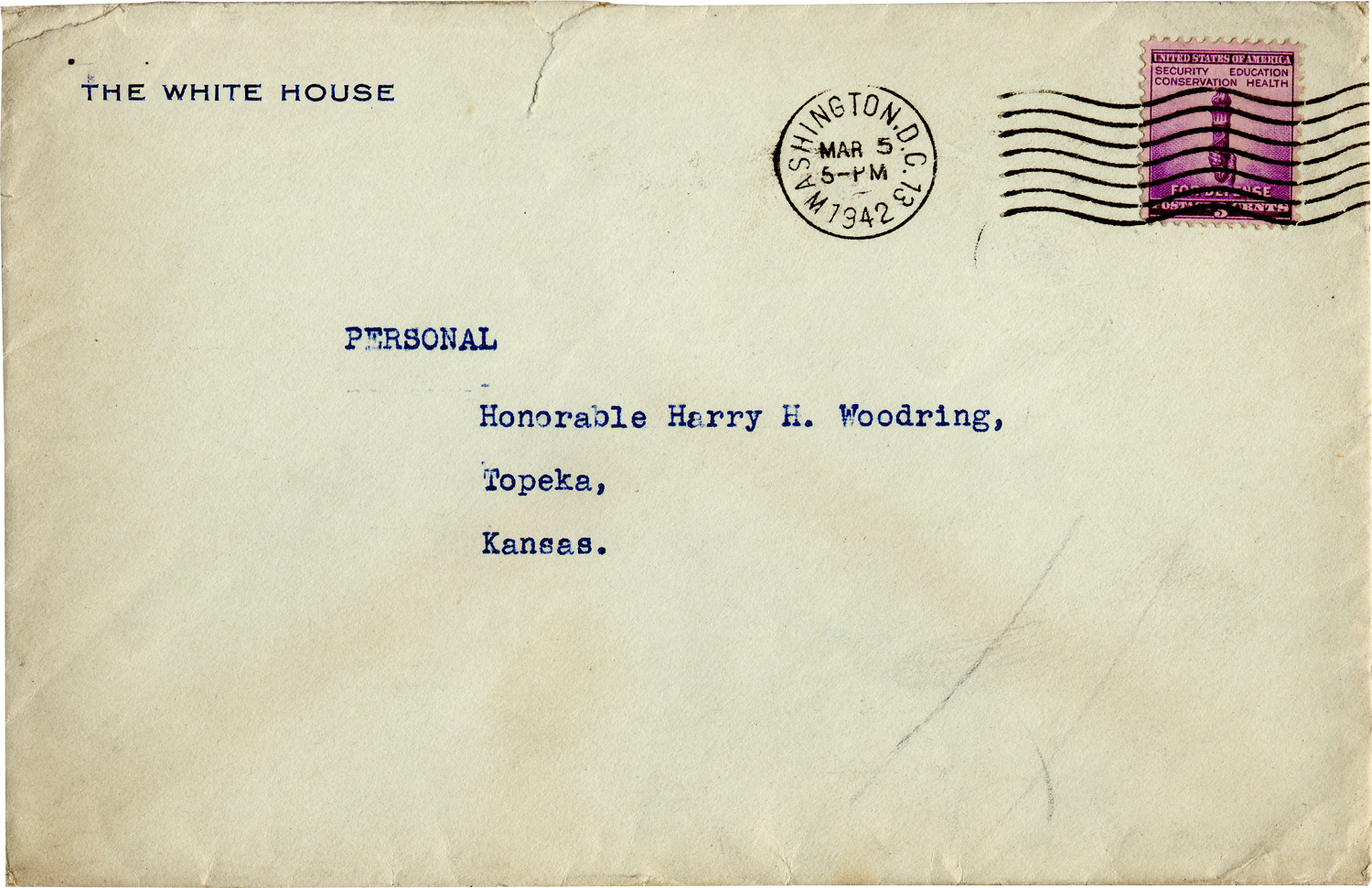