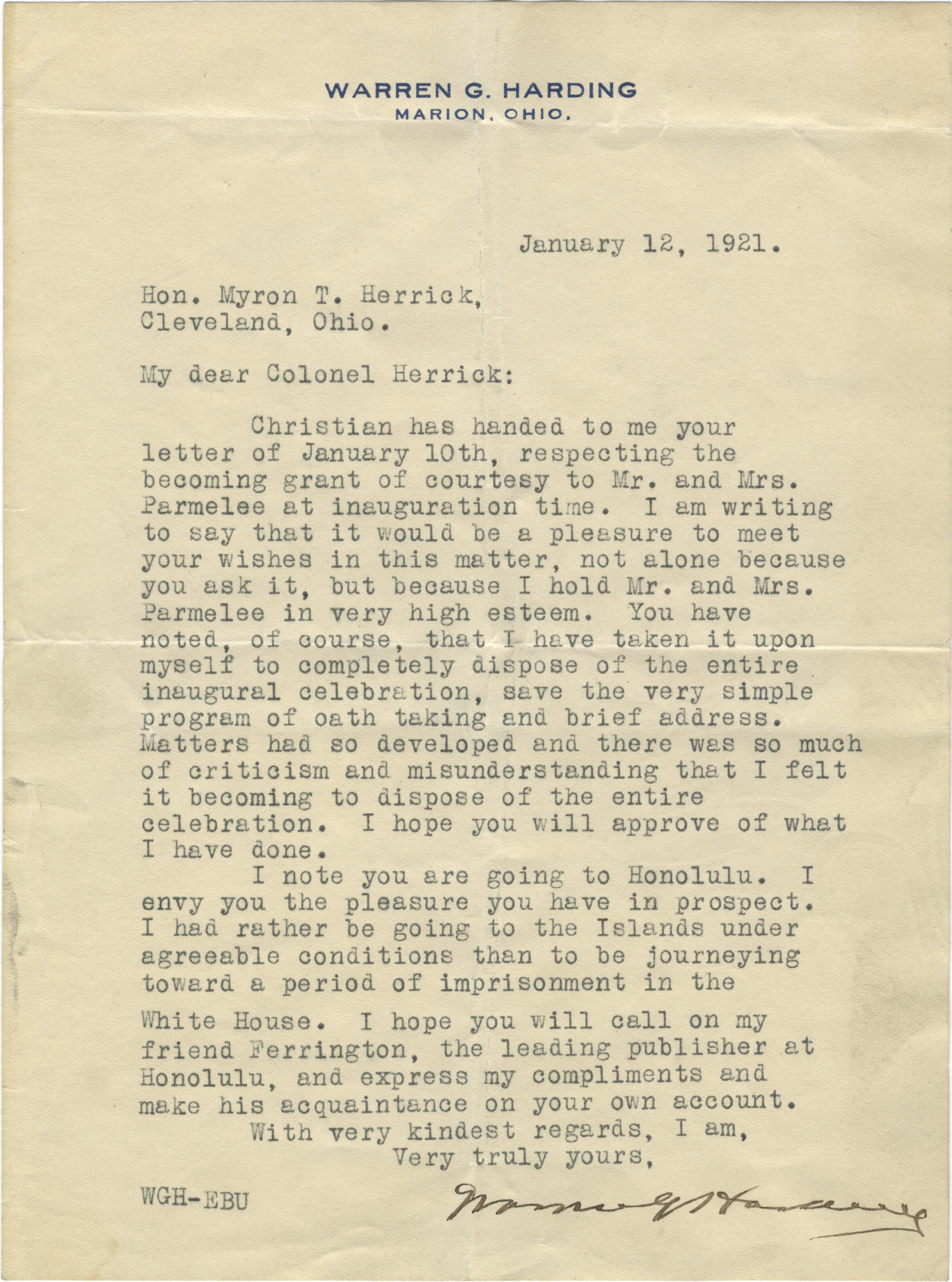 Flossie Kling, at 30, wore glasses, taught piano, had an illegitimate child and, upon marrying a man five years her junior in 1891, knew exactly what she wanted: the presidency. She did not, however, want it for herself. American women, after all, were not then – or for another 3 decades – even allowed to vote. No, she wanted it, in the time-honored tradition of political wives, for her new husband, the handsome and genial Warren G. Harding, and said so, right at their wedding. The cake sliced, she would now, she announced, “make him president.” Harding, good-natured to a fault, probably laughed along with everyone else. He was an altogether excellent mixer: good at poker, happy to lift a glass, popular everywhere and (much to wife Florence’s chagrin), a happy habitue of intimate but politely unmentionable relations. Still, if Warren was irredeemably amorous, his wife was nothing but industrious. As her young husband - proud owner of an undistinguished small-town newspaper – idled away his time with his feet on the desk smoking cigars, Florence took a wrench to the printing machines to keep them running. Indeed, running things became her calling card. “Florence Harding?” said a neighbor. “Runs her house, runs the paper, runs Warren; runs everything but the car, and she could run that if she wanted to.” But the man Florence called “Wurr’n”, didn’t take to being run and so ran away, as often as possible, to Republican Party events and meetings around Ohio. And that, give or take, is how Warren G. Harding, with his wife’s help, vision and inadvertent inspiration, became an Ohio State Senator, Lieutenant-Governor, failed gubernatorial candidate, and U.S. Senator. But becoming President? That would take more than one determined woman.

American women had been angling, organizing, and then outright fighting for the right to vote ever since Abigail Adams wrote to her husband John in 1776 to "remember the ladies" in the "new code of laws which I suppose it will be necessary for you to make.” None too delicately, she reminded him that “all men would be tyrants if they could” and warned “If particular care and attention is not paid to the ladies, we are determined to foment a rebellion, and will not hold ourselves bound by any laws in which we have no voice or representation.” That sentiment – indeed, pledge – underlay almost a century and a half of struggle before the 19th Amendment, guaranteeing “the right of citizens of the United States to vote shall not be denied or abridged by the United States …on account of sex” was ratified in August 1920. By then, however, women in 15 of the 48 states already enjoyed the right to vote. Still, the notion that the national electorate could, in the 1920 presidential contest, be doubled, struck many observers and politicians as positively revolutionary. Yet when the votes were counted on November 2nd, 1920, the results were anything but radical. White native-born women, like white native-born men – tired of war, a pandemic, the League of Nations – just wanted a return to “normalcy.” And that is exactly what Harding famously offered…

It was also what Harding himself wanted. No heroics, he declared, no nostrums, no revolution: just “before.” In other words, he wanted his life back to “normal”, too. Here, he says as much, discussing as President-Elect his upcoming inauguration and the courtesies due worthies like the founders of the National Carbon Company. He’ll be glad to do as ex-Ohio Governor Herrick asks; the Inaugural celebration will be as simple as possible, just oath taking and a brief address; and then Harding, already wishing himself a private citizen once more, declares

I note you are going to Honolulu. I envy you the pleasure you have in prospect. I had rather be going to the Islands under agreeable conditions than be journeying toward a period of imprisonment in the White House.

Harding was prophetic in envisioning the White House as a jail. Several members of his administration would land up in one. And he himself, ruing a job he thought would be fun but was anything but, soon came to feel as imprisoned as his scandal-ridden associates. But Harding was not the only one dealing in prophecy…

Right after Harding was inaugurated, as they stepped for the first time into the White House, Florence turned to him and said, “Well, Warren Harding, I have got you the Presidency. What are you going to do with it?” Of course, she was not alone in getting him where she wanted him: thousands of women, close as a whisper or distant as a ballot box, did the same.

Christian has handed to me your letter of January 10th, respecting the becoming grant of courtesy to Mr. and Mrs. Parmelee at inauguration time. I am writing to say that it would be a pleasure to meet your wishes in this matter, not alone because you ask it, but because I hold Mr. and Mrs. Parmeless in very high esteem. You have noted, of course, that I have taken it upon myself to completely dispose of the entire inaugural celebration, save the very simple program of oath taking and brief address. Matters had so developed and there was so much of criticism and misunderstanding that I felt it becoming to dispose of the entire celebration. I hope you will approve of what I have done.

I note you are going to Honolulu. I envy you the pleasure you have in prospect. I had rather be going to the Islands under agreeable conditions than to be journeying toward a period of imprisonment in the White House. I hope you will call on my friend Ferrington, the leading published at Honolulu, and express my compliments and make his acquaintance on your own account.

With very kindest regards, I am,