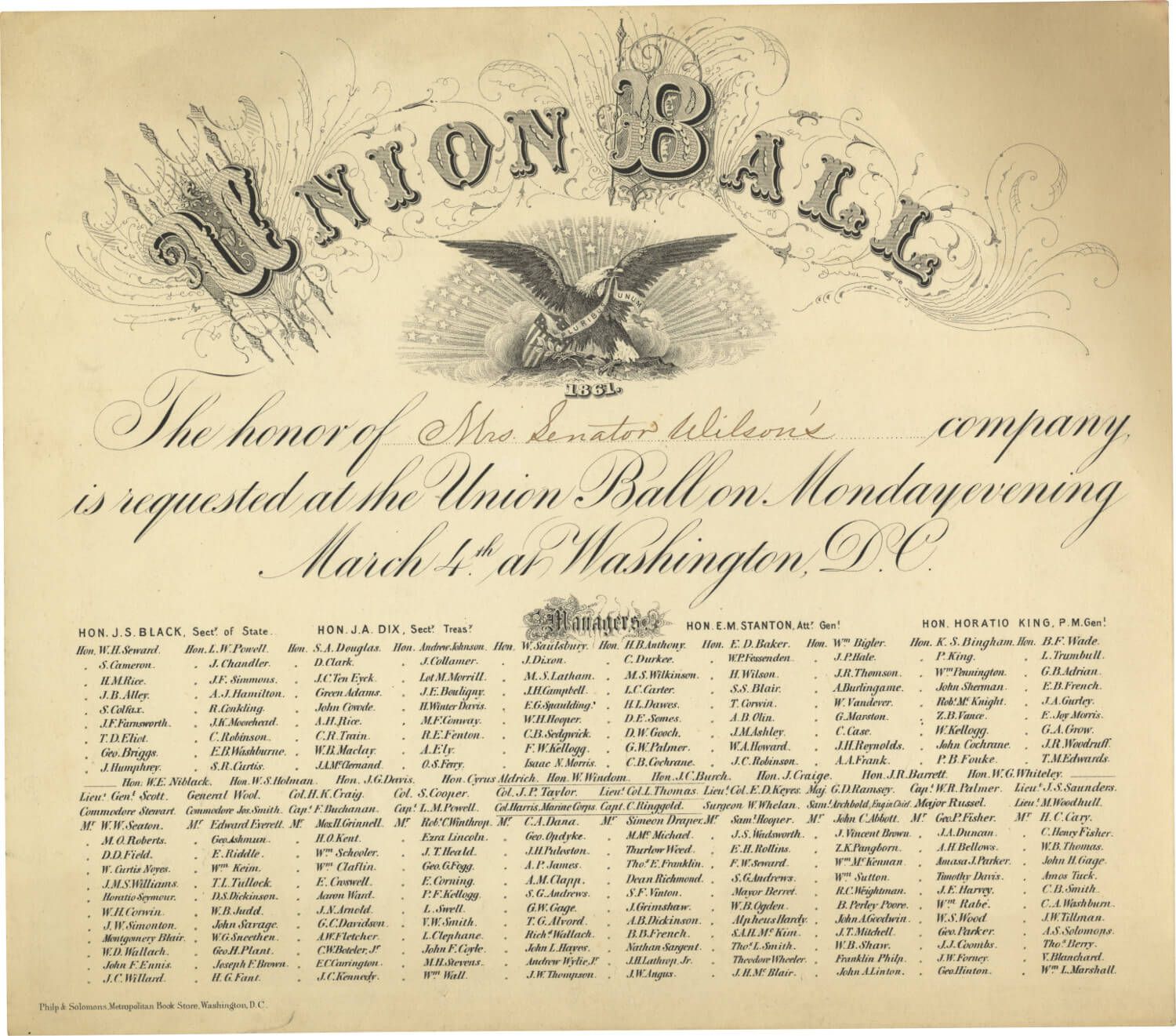 "Mrs. Senator Wilson," being the wife of Massachusetts' fervently Republican Senator Henry Wilson was, with this elaborately-engraved document - printed by the esteemed Washington firm of Philp & Solomons; the eponymous Solomons a prominent Jewish activist, philanthropist and businessman - hereby invited to attend President Lincoln's 1861 Inaugural gala, the "Union Ball," so named, no doubt, in light of the secession crisis engendered by the election. Solomons name appears twice, not incidentally, on the document; as printer and, in a larger font, in the honorable company of those Washington worthies acting as the Ball's Managers. Along with Lincoln's defeated rival, Stephen A. Douglas and various members of Lincoln's Cabinet, or soon-to-be members (Seward, Stanton, Cameron and Blair,) Solomons is listed - in the ninth column, far right, fourth from the bottom, as "A.S. Solomons." It was his first presidential inauguration; he would be involved with every succeeding one up to McKinley's.

The "Union Ball," which began promptly at 10 p.m., was held in a temporary ballroom constructed behind Washington’s City Hall, and dubbed the “white muslin Palace of Aladin.” The ballroom had rooms for dancing, rooms for supper, and dressing rooms located within City Hall, the ladies having commandeered the Common Council chamber, and the gentlemen, the courtroom. The President and Mrs. Lincoln arrived at 11 p.m. - and although Lincoln stayed only a half hour, and Mrs. Lincoln two, a grand time was had by all 2,500 guests.[Abraham Lincoln: 1861 Inaugural Ball] Document, accomplished in manuscript, being an invitation to the "Union Ball"; 1 page, oblong quarto, Washington D.C., March 4, 1861, printed by Philp & Solomons, Metropolitan Book Store, Washington D.C. Invited is the wife of Massachusetts Senator Henry Wilson - who would later serve as a Vice President to Grant. Very rare.
Read More

The honor of  Mrs. Senator Wilson's company,
is requested at the Union Ball on Monday evening
March 4th at Washington, D. C.